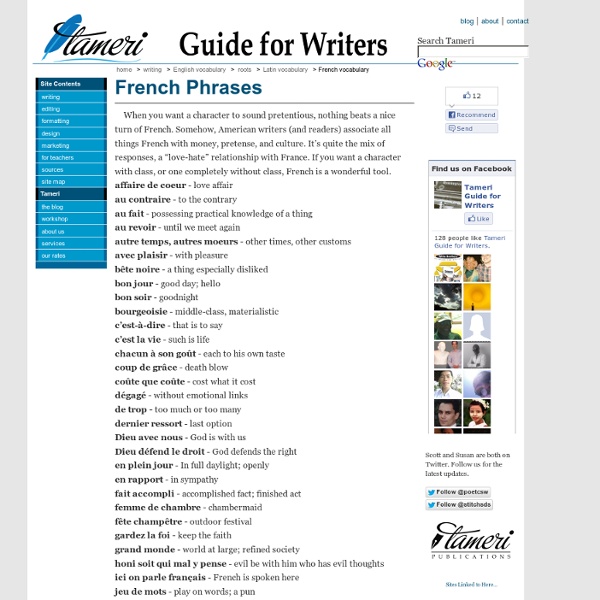 When you want a character to sound pretentious, nothing beats a nice turn of French. Somehow, American writers (and readers) associate all things French with money, pretense, and culture. It’s quite the mix of responses, a “love-hate” relationship with France. If you want a character with class, or one completely without class, French is a wonderful tool. affaire de coeur - love affair au contraire - to the contrary au fait - possessing practical knowledge of a thing au revoir - until we meet again autre temps, autres moeurs - other times, other customs avec plaisir - with pleasure bête noire - a thing especially disliked bon jour - good day; hello bon soir - goodnight bourgeoisie - middle-class, materialistic c’est-à-dire - that is to say c’est la vie - such is life chacun à son goût - each to his own taste coup de grâce - death blow coûte que coûte - cost what it cost dégagé - without emotional links de trop - too much or too many dernier ressort - last option Dieu avec nous - God is with us

How to Structure A Story: The Eight-Point Arc By Ali Hale - 3 minute read One of my favourite “how to write” books is Nigel Watts’ Writing A Novel and Getting Published. My battered, torn and heavily-pencil-marked copy is a testament to how useful I’ve found it over the years. (Even if you’re a short story writer or flash fiction writer rather than a novelist, this structure still applies, so don’t be put off by the title of Watts’ book.) The eight points which Watts lists are, in order: StasisTriggerThe questSurpriseCritical choiceClimaxReversalResolution He explains that every classic plot passes through these stages and that he doesn’t tend to use them to plan a story, but instead uses the points during the writing process: I find [the eight-point arc] most useful as a checklist against which to measure a work in progress. So, what do the eight points mean? Stasis This is the “every day life” in which the story is set. Trigger Something beyond the control of the protagonist (hero/heroine) is the trigger which sparks off the story.

The Cellulite Solution Ask any woman: If there’s one thing that’s worse than fat, it’s dimply fat. After all, everyone hates cellulite . And that goes double for the ladies. Yes, this affliction plagues some men, but it’s far more prevalent in females. In fact, up to 98 percent of adult women have some degree of cellulite, according to a recent paper from Cornell University. Read: It doesn’t matter if you’re carrying around extra pounds or are as skinny as a model, cellulite could still be a problem—especially on your butt. Eight years ago, when Rachel was working as a model, she noticed that a cottage-cheese-like complexion began to appear on her backside. Her strategy: Avoid making eye contact with her own butt. Get expert exercise advice and workout ideas from Prevention's fitness experts. Soon after, Rachel landed a recurring role on the hit show Alias. But a few weeks later? While there are many theories to the actual cause of cellulite, one point that’s not disputed: It’s fat.

Kurt Vonnegut -- troubling.info Eight rules for writing fiction: 1. Use the time of a total stranger in such a way that he or she will not feel the time was wasted. 2. Give the reader at least one character he or she can root for. 3. 4. 5. 6. 7. 8. -- Vonnegut, Kurt Vonnegut, Bagombo Snuff Box: Uncollected Short Fiction (New York: G.P. Kurt Vonnegut: How to Write with Style New Zealand–United States relations New Zealand–United States relations refers to international relations between New Zealand and the United States of America. According to the U.S. State Department, relations as of August 2011 are "the best they have been in decades."[1] New Zealand is a major non-NATO ally of the United States.[2] Both the United States and New Zealand share some common ancestry and history (having both been British colonies). According to the 2012 U.S. History[edit] The United States established consular representation in New Zealand in 1838 to represent and protect American shipping and whaling interests, appointing James Reddy Clendon as Consul, resident in Russell.[5] In 1840, New Zealand became part of the British Empire with the signing of the Treaty of Waitangi. Guadalcanal, Tarawa, Iwo Jima and beyond[edit] Tanks and Landing equipment in New Zealand for the US Guadalcanal operation "The Old Breed" ANZUS Treaty[edit] WW2 poster Thawing of military ties[edit] On 21 September, visiting U.S.

100 Exquisite Adjectives By Mark Nichol Adjectives — descriptive words that modify nouns — often come under fire for their cluttering quality, but often it’s quality, not quantity, that is the issue. Plenty of tired adjectives are available to spoil a good sentence, but when you find just the right word for the job, enrichment ensues. Subscribe to Receive our Articles and Exercises via Email You will improve your English in only 5 minutes per day, guaranteed! 21 Responses to “100 Exquisite Adjectives” Rebecca Fantastic list! Aoraki Mackenzie Starlight Festival, Friday 11 October 2013 to Sunday 13 October 2013, Tekapo, New Zealand Students in Years 5 – 8 and 9 - 13 are invited to submit an Essay of not more than 600 words or a poem of no more than 40 lines by August 12th 2013. Margaret Mahy developed a curiosity about the universe early in life and wrote: “That interest in astronomy tended to dominate for many years. I can remember well buying a telescope kitset from the local camera shop in Whakatane. Students are invited to choose one of these themes: I am inspired by stars in the night sky What can we do about light pollution? Your prose or poetry can be imaginary, historical or scientifically based. The 10 best entries will win an exciting weekend at Tekapo all expenses paid, a kitset Galileoscope and a visit to the University Observatory at Mt John along with a Certificate presented by NASA astronaut Marsha Ivins, a veteran of five Shuttle missions, who will be at the festival as a special guest. The following four judges have been appointed to find the competition's winners. They are: Junior division- Winners

Useful references for writers - WestSuburbanWriters Because there are HUGE misunderstandings about what a copyright is these days and I keep seeing them repeated over and over again. I thought I could help. There's a good start. So, yes fan fiction is a violation of copyright. Copyrights are made as soon as you make them into apparent form. This post will be invalid in its copyright after I'm dead for EIGHTY years. Also another thing to know is that an official copyright is EXPENSIVE, which is why most publishers will do it for you. Copyright info and Electronic publishing info from the Science Fiction Writers of America.

Coins of ancient Rome Nude Figures and Erotic Images on Ancient Coins. These coins were made in Rome around the first century BC and they were paying for certain services, or they went as usual? Questionnaires for Writing Character Profiles Enter your e-mail to get the e-book for FREE. We'll also keep you informed about interesting website news. "I have searched the web and used different worksheets, but none have come close to your worksheets and descriptions of (what to do and what not to do). Both courses I have taken have with Creative Writing Now have been amazing. Each time I have learned something new. "As usual - I already love the course on Irresistible Fiction, rewriting a lot and improving greatly even after the first lesson. “Essentials of Fiction proved that I could indeed write and I wrote every day, much to my boyfriend's dismay (waa sniff).” - Jill Gardner "I am loving the course and the peer interaction on the blog is fantastic!!!" "I'm enjoying the weekly email course, Essentials of Poetry Writing. "Thank you for all the material in this course. "I was pleasantly surprised at the quality of the lessons and feel they were very helpful in introducing new ideas and perspectives to my writing.

Aggressive Body Language Techniques > Using Body Language > Aggressive Body Language Body positions | Gestures | See also A significant cluster of body movements is used to signal aggression. This is actually quite useful as it is seldom a good idea to get into a fight, even for powerful people. Fighting can hurt you, even though you are pretty certain you will win. Threat Facial signals Much aggression can be shown in the face, from disapproving frowns and pursed lips to sneers and full snarls. Attack signals When somebody is about to attack, they give visual signal such as clenching of fists ready to strike and lowering and spreading of the body for stability. Exposing oneself Exposing oneself to attack is also a form of aggression. Invasion Invading the space of the other person in some way is an act of aggression that is equivalent to one country invading another. False friendship Approach When you go inside the comfort zone of others without permission, you are effectively invading their territory. Touching Gestures

Write & Get Paid Get Paid $100 Do you want to earn money online? Listverse was built on the efforts of readers just like you. Readers who didn’t have any experience as writers but decided to put a list together and send it in. So here is the deal: We will pay you $100 for your efforts. It works like this: You write your list (10 items per list minimum), you send it in, we reply and say “Great—we’ll publish it” and send you $100 by PayPal (don’t have an account? Either way you win—your list will be read by us and reviewed, and if it’s amazing it will appear on the front page of Listverse to be read by millions of people a month! We can not accept lists from writers who do not have a PayPal account; this is non-negotiable. The Rules The rules are really pretty simple. Oh—and there’s one more thing: If you have a blog, a Twitter account, or a book you want to promote, mention it in the submissions form and we will stick it at the bottom of your list. Pictures and Video Ready to start?

23 Writing Websites to Improve Your Writing We are all apprentices in a craft where no one ever becomes a master. ~Ernest Hemingway How strong is your writing? No matter how good you think it is, there’s always room for improvement. (***By the way, have you seen this amazing online creative writing course, “Story Is a State of Mind,” created by Giller finalist Sarah Selecky? Want to strengthen your story, empower your performance, and beef up on the publishing business? Here are 23 sites (in no particular order) I look to for daily inspiration and advice: PS If you find this list useful, please share it on Twitter, Facebook or StumbleUpon – I’d really appreciate it! 4) Query Shark A query critique site you don’t want to miss. 5) Men with Pens Fantastic articles on copywriting and freelancing. 6) Ask Allison Writing and publishing Q&A by novelist Allison Winn Scotch. 10) Pub Rants Self-proclaimed “very nice literary agent,” Kristin Nelson, rants about writing and publishing. What sites help you make your writing stronger?