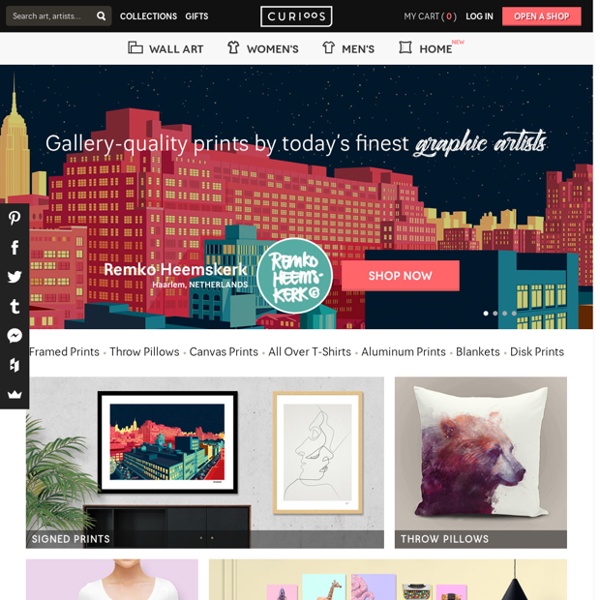 Cool Tools Lots of ideas for last minute holiday shopping There is still enough time to buy cool tools as gifts and have them arrive before Christmas. Here’s our complete list of gift ideas for 2016. (And here’s Boing Boing’s complete gift guide, too.) Happy Holidays! I started trying some of the ceramic coated pans a few years back and have found one to be the best, the Scanpan ($98). Inuit Mythology Project « Eva Widermann Illustration Artwork for the INUIT MYTHOLOGY PROJECT by Inhabit Media, Nunavut The Inuit Mythology Project was founded to collect and preserve the culture, the legends and the heroes of the Inuit for their children. I feel honoured to take part in this exciting project. All images © by Inhabit Media

«Katharsis», Numbered Edition Fine Art Print by ROLANDO Cyril - From $19 - Curioos Preview this artwork on your wall with augmented reality. About this artwork It begins when you open your diary, To write down the feeling of the day, With the ink of your black thoughts. Pages are changed into watercrafts, Transporting pain, fears and secrets, To try to get across the deep waters. ROLANDO Cyril

Are Top Online Art Auction Sites Successful? As we’ve promised, we’re back with some of the best online art auction houses and online art auction sites in the world. Vast majority of them started as startups, being backed by financial angels and venture capital. Over the years, many of them received tens of millions of dollars via investors funding – some even more than a hundred million. Since a lot of enlisted companies are private, which means that they usually do not release exact sales figures, we were not able to find information on revenues of all companies, but don’t worry, there’s a lot – a lot – of other data. 500px start page

Stephan Balleux - They shoot horses don't they They shoot horses don’t they This section displays the works I produced during my stay in Melbourne, at the Wardlow Art Residency ++ Long time no see, a limited edition book/catalogue was also produced:Constructed as a pictorial diary on my australian journey, it was conceived in close collaboration with the folks from South-SouthWest , a Melbourne based graphic designer studio.The book features an interview holds by painter Sam Leach ++ A review by Tony Lloyd at artinfo.com.au & a bunch of informations and a video interview at artinfo.com.au Paintingpainting#24 200×150cm oil on canvas 2009 paintingpainting#26 paintingpainting#25

Strike Search - Torrent Search Engine I suppose I’ve been waiting to make this post for sometime. Source code for Strike Search is released here some of you might be aware that since Aurous was sued and shutdown I’ve been quite absent from maintaining a few of my projects. Strike being one of the most popular. I receive constant emails that the search page no longer works; this was done for good reason. While I did attempt to make Strike purely a meta data engine after the lawsuit, I felt too exposed even operating it. L'ACTE GRATUIT Wojciech Papaj aka @drpajchiwo is 46 years-old teacher from Nowy Sacz in Poland. He discovered mobile photography relatively recently, only three years ago. Equipped with Lumia 830, takes pictures and edits them using mobile applications - it is convenient and saves time. Since 2013 is a proud member of the first Polish group of enthusiasts of mobile photography - Grupa Mobilni.

Alexander Gilkes Takes the Art World Digital with Paddle8 Most auctioneers spend years training for their first -major sale. Not so Alexander Gilkes, who just 12 months after arriving in New York to serve as the marketing director at Phillips de Pury & Company, suddenly found himself wielding the gavel for its 2009 Latin American auction at the insistence of his boss, Simon de Pury. “I was terrified,” Gilkes recalls. But de Pury’s hunch that his protégé, whom he had personally plucked from Krug, would be a natural proved spot-on. “I’ve seen hundreds of auctioneer starts,” says the former Phillips chairman, himself one of the world’s great auctioneers.

Street Art Current Issue On sale now at newsstands or on screen May 2014 - Issue #160 All year long, Juxtapoz is celebrating its 20th Anniversary by showcasing the pivotal figures in contemporary art over the past two decades. Some artists are blue chip, some are underground heroes, others are behind-the-scenes legends. SensorWake - Wake Up Happy with the Smell-Based Alarm Clock by Guillaume Rolland Risks and challenges We are very proud to be able to offer our product to backers on Kickstarter. But for us, it’s only the beginning. The most important thing for us is to make sure our community, especially our Kickstarter backers fully enjoy our product. We have already worked for two years to get our prototype up and running.

Jakub Rebelka – Concept Art World Jakub Rebelka is a freelance illustrator, comics creator and concept artist working in both digital and traditional mediums. He has created illustrations for animated cutscenes for games such as The Witcher 2: Assassins of Kings and Shadow Warrior. Jakub is currently working with writer Yohan Radomski on a fantasy graphic novel titled City of Dogs. Link: shzrebelka.tumblr.com