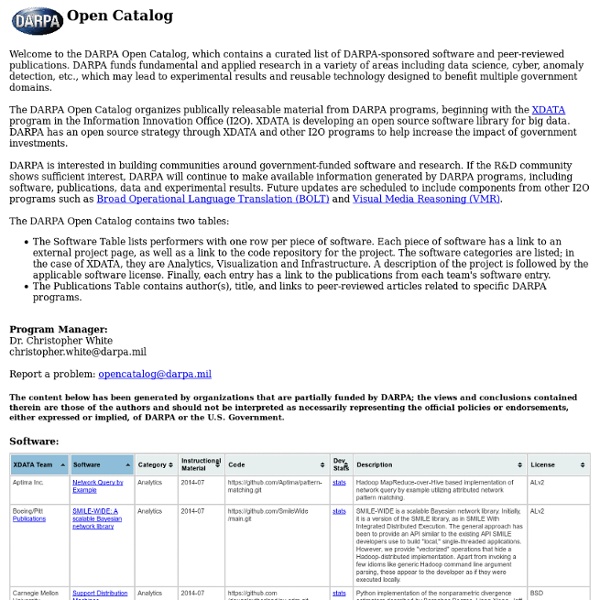 Welcome to the DARPA Open Catalog, which contains a curated list of DARPA-sponsored software and peer-reviewed publications. DARPA sponsors fundamental and applied research in a variety of areas including data science, cyber, anomaly detection, etc., which may lead to experimental results and reusable technology designed to benefit multiple government domains. The DARPA Open Catalog organizes publicly releasable material from DARPA programs. DARPA has an open strategy to help increase the impact of government investments. DARPA is interested in building communities around government-funded software and research. The table on this page lists the programs currently participating in the catalog. Program Manager: Dr. Report a problem: opencatalog@darpa.mil Related:  technical • SOFTWARE

GParted partitioning software - Full tutorial Updated: April 25, 2009 No matter which operating system you want to have installed on your machine, there's one thing they all have in common: partitions. These are logical pieces of your actual hard disk space, defining the size and the file system format for the operating systems and data that are going to be placed on them. Being able to control the partitions is one of the most basic, most important aspects of mastering your operating system. If you have the knowledge and confidence to manipulate the layout, create it, change it or delete it, you can adapt your hardware to your varying needs, without having to blindly rely on default setups defined by vendors or other people. After completing this tutorial, you will have learned how to interpret the partitioning dictionary, what the strange symbols, letters and numbers mean. Never again you shall fear using partitioning software or installing operating systems on hard disks already containing data. Table of contents: Or like this:

XDATA is developing an open source software library for big data to help overcome the challenges of effectively scaling to modern data volume and characteristics. The program is developing the tools and techniques to process and analyze large sets of imperfect, incomplete data. Its programs and publications focus on the areas of analytics, visualization, and infrastructure to efficiently fuse, analyze and disseminate these large volumes of data. Program Manager: Dr. Contact: christopher.white@darpa.mil The content below has been generated by organizations that are partially funded by DARPA; the views and conclusions contained therein are those of the authors and should not be interpreted as necessarily representing the official policies or endorsements, either expressed or implied, of DARPA or the U.S. The Software Table lists performers with one row per piece of software. Report a problem: opencatalog@darpa.mil

LaTeX LaTeX (/ˈleɪtɛk/ LAY-tek or /ˈlɑːtɛk/ LAH-tek[1]) is a document preparation system and document markup language. It is the de facto standard for the communication and publication of scientific documents in many fields, including mathematics, physics, and computer science.[2] LaTeX uses the TeX typesetting program for formatting its output, and is itself written in the TeX macro language. LaTeX is not the name of a particular editing program, but refers to the encoding or tagging conventions that are used in LaTeX documents. LaTeX is widely used in academia.[3][4] It is also used as the primary method of displaying formulas on Wikipedia. LaTeX can be used as a primary or intermediate format, e.g., translating DocBook and other XML-based formats to PDF. LaTeX was originally written in the early 1980s by Leslie Lamport at SRI International.[5] The current version is LaTeX2e (styled as LaTeX2ε). Typesetting system[edit] Examples[edit] Note how the equation for was typeset by the markup:

Tangelo Built for ease of development Starting a Tangelo application is as simple as creating an index.html file, which can refer to supporting Javascript and CSS as needed. If you need custom server-side processing, data gathering, or a full REST API, put a Python file right alongside your Javascript and HTML to expose it as a service. For example, suppose you want to manipulate some text on your server. The Javascript code provides a handler for the button to submit the text to the server and display the results. To implement a service, just add a Python file anywhere. That's it. For more information, take a look at the documentation. How To Pick The Right Motor Oil For Your Car It might seem simple to pick engine oil for your car. You just look for the starburst symbol that indicates the oil has been tested and meets the standards of the American Petroleum Institute (API). In addition, there's a 2-character service designation on the container. API's latest service standard is "SL." SL refers to a group of laboratory and engine tests, including the latest series for control of high-temperature deposits. These are the labels you'll find on every container of reputable motor oil. Is oil really the lifeblood of an engine? Oil is so important that we want no less than the best the engine can get--for a good low price, of course. Sounds pretty neat, and we were given the opportunity to do just that at the Valvoline lab in Lexington, Ky. That was our one shot at playing lubricant scientist, but the experience produced only enough oil for a top-up. Viscosity Once the engine is running, the oil heats up. Why So Many Oils? Viscosity Index Oil Additives More Is Not Better

Packet sniffers SecTools.Org: Top 125 Network Security Tools For more than a decade, the Nmap Project has been cataloguing the network security community's favorite tools. In 2011 this site became much more dynamic, offering ratings, reviews, searching, sorting, and a new tool suggestion form . This site allows open source and commercial tools on any platform, except those tools that we maintain (such as the Nmap Security Scanner , Ncat network connector , and Nping packet manipulator ). We're very impressed by the collective smarts of the security community and we highly recommend reading the whole list and investigating any tools you are unfamiliar with. 14 tools Wireshark (known as Ethereal until a trademark dispute in Summer 2006) is a fantastic open source multi-platform network protocol analyzer. version 1.8.0 on June 21, 2012 (1 month ago). sniffers UNIX users often smugly assert that the best free security tools support their platform first, and Windows ports are often an afterthought. crackers

mitll/MITIE Troubleshoot Fuel Gauge Home, Automotive Repair Library, Auto Parts, Accessories, Tools & Equipment, Manuals & Books, Car BLOG, Links, Index Fuel Gauge Problem? Need Help Now? Click on the banner below to Ask an Expert: Copyright AA1Car Nothing is more aggravating than a fuel gauge that doesn't give an accurate reading, especially when the gauge shows there's still fuel in the tank when there really is not. In 1904, the first float arm gas gauge appeared. There are essentially three types of fuel gauges: analog resistance (used almost universally up through the early 1980s), analog magnetic (introduced in the '80s) and digital/graphic electronic gauges (also introduced in the '80s and used to this day). Analog fuel gauges use a heated bimetal strip to move the indicator needle on the fuel gauge. The amount of current that flows through the fuel gauge is controlled by the ground circuit provided by the sending unit in the fuel tank. The successor to the resistance type fuel gauge is the magnetic fuel gauge.

10 Free, Open-Source Replacements for Commercial Tools | TuxArena This is an overview providing 10 Linux open-source replacements for various commercial power tools, most of them available only on Windows. Computer-Aided Design: AutoCAD Replacement: QCAD It’s true, QCAD has some paid plug-ins, but they can be removed very easy and QCAD will offer most of AutoCAD’s features in a similar fashion, but with an interface that is maybe 10 times faster. The good thing about QCAD is that those who are used to AutoCAD can make the transition pretty easily, since QCAD has similar syntax for commands, and similar menu entries. Image Editor: Photoshop Replacements: GIMP and Krita Both GIMP and Krita are powerful image manipulation tools, the first one being written in GTK, while Krita integrates better in KDE. These applications comes with support for layers, powerful editing tools, saving or exporting to a huge number of formats, visual effects, filters. (Image credit)

Home · NextCenturyCorporation/neon Wiki Troubleshooting Your Gas Gauge By RANDY RUNDLE Most gas tank units consist of two parts, the gauge mounted in the dash and a tank sender mounted in the tank. The following trouble-shooting instructions apply to the AC-type fuel gauge, which is one of the most common type of units. Your service manual will give you any added instructions necessary for your specific type of fuel gauge. The gas gauge, often located in the instrument cluster, consists of two small coils spaced 90 degrees apart with an armature and a needle placed at the intersection of the two coils. A dampener is also located on the armature to prevent excessive needle movement on rough roads. The tank sender unit is mounted to the outside of the gas tank (with a float on the inside, of course) and is made up of a metal housing that contains a rheostat (which is simply a resistance unit), and a brush that comes in contact with the resistance unit. The most common cause of gas gauge trouble is a poor ground, especially at the tank sender unit.