Netduino Controlled by Kinect. Update: I've uploaded the code I wrote for this demonstration project to GitHub into my KinectControlledNetduino public repository. 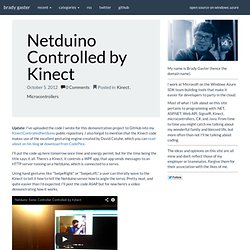 I also forgot to mention that the Kinect code makes use of the excellent gesturing engine created by David Catuhe, which you can read about on his blog or download from CodePlex. I'll put the code up here tomorrow once time and energy permit, but for the time being the title says it all. There's a Kinect, it controls a WPF app, that app sends messages to an HTTP server running on a Netduino, which is connected to a servo. Using hand gestures like "SwipeRight" or "SwipeLeft," a user can literally wave to the Kinect to tell it how to tell the Netduino server how to angle the servo. Pretty neat, and quite easier than I'd expected. The Kinectonitor. Suppose you had a some scary-looking hoodlum walking around your house when you were out? 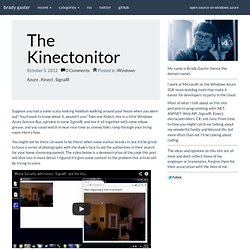 You’d want to know about it, wouldn’t you? Take one Kinect, mix in a little Windows Azure Service Bus, sprinkle in some SignalR, and mix it all together with some elbow grease, and you could watch in near-real-time as sinewy folks romp through your living room. Here’s how. You might not be there (or want to be there) when some maniac breaks in, but it’d be great to have a series of photographs with the dude’s face to aid the authorities in their search for your home stereo equipment. The video below is a demonstration of the code this post will dive into in more detail. Blob Storage of Kinectonitor Images. The Kinectonitor has received a lot of commentary and I’ve received some great ideas and suggestions on how it could be improved. 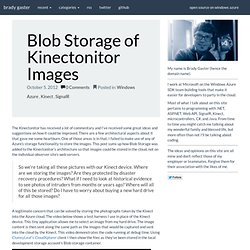 There are a few architectural aspects about it that gave me some heartburn. One of those areas is in that, I failed to make use of any of Azure’s storage functionality to store the images. This post sums up how Blob Storage was added to the Kinectonitor’s architecture so that images could be stored in the cloud, not on the individual observer site’s web servers. So we’re taking all these pictures with our Kinect device. Where are we storing the images? A legitimate concern that can be solved by storing the photographs taken by the Kinect into the Azure cloud. Now we’ll take a slightly deeper dive into the changes that have been made in this update of the Kinectonitor source code.

The Kinectonitor Worker Role This new project basically serves the purpose of listening for ImageMessage instances. The worker role does very little handiwork with the Blob Storage. CakeRobot - A Gesture Driven Robot That Follows Your Hand Movements Using Arduino, C# and Kinect. Over the last few weekends I’ve spend some time building a simple robot that can be controlled using Kinect. 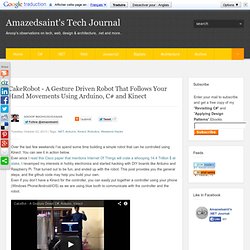 You can see it in action below. Ever since I read this Cisco paper that mentions Internet Of Things will crate a whooping 14.4 Trillion $ at stake, I revamped my interests in hobby electronics and started hacking with DIY boards like Arduino and Raspberry Pi. That turned out to be fun, and ended up with the robot. This post provides you the general steps, and the github code may help you build your own. Kinect.ReactiveV2 – Rx-ing the Kinect for Windows SDK.

A few weeks ago I was finally able to get my hands on to the new Kinect for Windows V2 SDK. 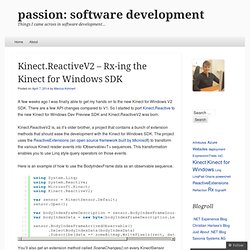 This transformation enables you to use Linq style query operators on those events. Here is an example of how to use the BodyIndexFrame data as an observable sequence. You’ll also get an extension method called SceneChanges() on every KinectSensor instance which notifies all it’s subscribers whenever a person entered or left a scene. The source code is available here. Like this: Like Loading... Passion: software development. Developer SDK, Toolkit & Documentation. 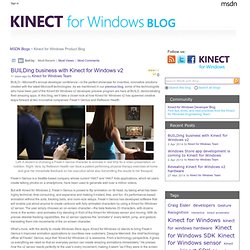 As we mentioned in our previous blog, some of the technologists who have been part of the Kinect for Windows v2 developer preview program are here at BUILD, demonstrating their amazing apps. In this blog, we’ll take a closer look at how Kinect for Windows v2 has spawned creative leaps forward at two innovative companies: Freak’n Genius and Reflexion Health. Left: A student is choosing a Freak’n Genius character to animate in real time for a video presentation on nutrition. Right: Vera, by Reflexion Health can track a patient performing physical therapy exercises at home and give her immediate feedback on her execution while also transmitting the results to her therapist. Mercredi notes that YAKiT is already being used for storytelling, marketing, education reports, enhanced communication, or just having fun. Kinect for Window Dev Center. 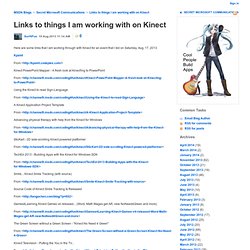