Informal Networks: The Company Behind the Chart. Many executives invest considerable resources in restructuring their companies, drawing and redrawing organizational charts only to be disappointed by the results. 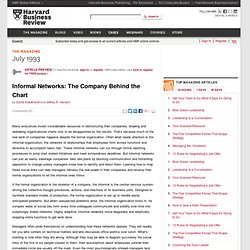 That’s because much of the real work of companies happens despite the formal organization. Often what needs attention is the informal organization, the networks of relationships that employees form across functions and divisions to accomplish tasks fast. These informal networks can cut through formal reporting procedures to jump start stalled initiatives and meet extraordinary deadlines.

But informal networks can just as easily sabotage companies’ best laid plans by blocking communication and fomenting opposition to change unless managers know how to identify and direct them. Learning how to map these social links can help managers harness the real power in their companies and revamp their formal organizations to let the informal ones thrive. Managers often pride themselves on understanding how these networks operate.

It’s A Vuca World! Shaping the organization of the future. Designing team based. Secrets of great teams: Why dream teams fail - Jun. 1, 2006. It may be tempting to recruit all-stars and let 'em rip. 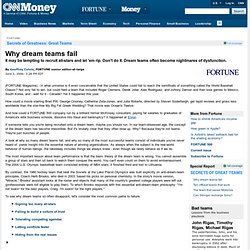 Don't do it. Dream teams often become nightmares of dysfunction. (FORTUNE Magazine) - In what universe is it even conceivable that the United States could fail to reach the semifinals of something called the World Baseball Classic? Not only fail to win, but could field a team that included Roger Clemens, Derek Jeter, Alex Rodriguez, and Johnny Damon and then lose games to Mexico, South Korea, and - wait for it - Canada? Yet it happened this year.

How could a movie starring Brad Pitt, George Clooney, Catherine Zeta-Jones, and Julia Roberts, directed by Steven Soderbergh, get tepid reviews and gross less worldwide than the star-free My Big Fat Greek Wedding? And how could a FORTUNE 500 company run by a brilliant former McKinsey consultant, paying fat salaries to graduates of America's elite business schools, dissolve into fraud and bankruptcy? If someone tells you you're being recruited onto a dream team, maybe you should run. Seven reasons why teams are more important than ever! Peter Honey, leading industrial psychologist and learning guru, needs no introduction. 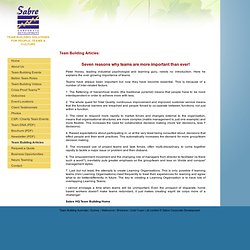 Here he explains the ever growing importance of teams. Teams have always been important but now they have become essential. This is because of a number of inter-related factors. 1. The flattening of hierarchical levels (the traditional pyramid) means that people have to be more interdependent in order to achieve more with less. 2. 3. 4. Network lens. 7 Reasons Why Top Teams are Vital in Times of Crisis. Why are effective teams so important in challenging times? 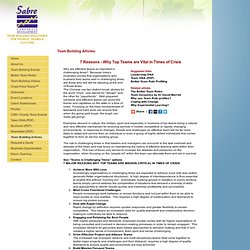 Because history invariably proves that organizations who husband their teams well in challenging times, are those who will still be standing at the end of those times. The Chinese use two distinct brush strokes for the word “crisis”, one stands for “danger” and the other for “opportunity”. Well prepared, cohesive and effective teams can avoid the former and capitalise on the latter in a time of crisis. Focusing on the basic fundamentals of teamwork and hard work can ensure that when the going gets tough, the tough can really get going! Examples abound in nature, the military, sport and especially in business of top teams being a natural and very effective mechanism for ensuring survival in hostile, competitive or rapidly changing environments. Teams in workplace can provide the edge between also-ran, champs - Kansas City Business Journal. Teams in the workplace is perhaps the most powerful organizational concept since the Roman Legions. 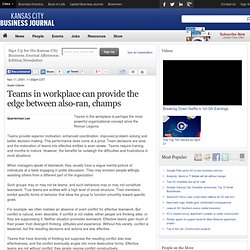 Teams provide superior motivation, enhanced coordination, improved problem-solving and better decision-making. This performance does come at a price. Team decisions are slow, and the maturation of teams into effective entities is even slower. Teams require training and months to mature. However, the benefits far outweigh the difficulties and frustrations in most situations. When managers speak of teamwork, they usually have a vague mental picture of individuals at a table engaging in polite discussion. Such groups may or may not be teams, and such behaviors may or may not constitute teamwork.

For example, we often mistake an absence of overt conflict for effective teamwork. Teams that have diversity of thinking but suppress the resulting conflict also lose effectiveness, and the conflict eventually erupts into more destructive forms.