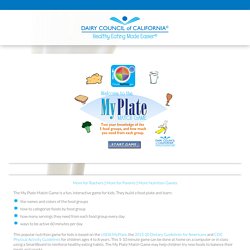 They build a food plate and learn: * the names and colors of the food groups * how to categorize foods by food group * how many servings kids need from each food group * ways to be active 60 minutes per day This popular nutrition game for kids is based the USDA MyPlate and the 2010 Dietary Guidelines for Americans for children ages 4 to 8 years. This 5-10 minute game can be done at home on a computer or in class using a SmartBoard to reinforce healthy eating habits. The My Plate Match Game may help children to try new foods to balance their meals and snacks. USDA food recommendations have over 100 years of history—evolving and expanding based on updated nutrition research. This activity complies with the Children's Online Privacy Protection Act as stated under the Federal Trade Commission Privacy Initiatives. Untitled. NUTRIENTS AND DIGESTION. Respiratory System.

Animal Systems: Respiratory System. Your respiratory system is all about exchanging gases with the environment. 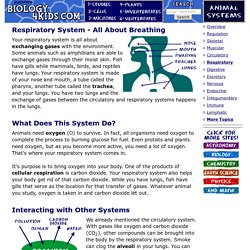 Some animals such as amphibians are able to exchange gases through their moist skin. Fish have gills while mammals, birds, and reptiles have lungs. Your respiratory system is made of your nose and mouth, a tube called the pharynx, another tube called the trachea, and your lungs. You have two lungs and the exchange of gases between the circulatory and respiratory systems happens in the lungs. Animals need oxygen (O) to survive.

It's purpose is to bring oxygen into your body. We already mentioned the circulatory system. Although it does not happen in all animals, your respiratory system also interacts with your digestive system. What can go wrong with your respiratory system? Smokers can have a build up of tar and clog the alveoli in the lungs and decrease the amount of oxygen your body can take in. KS2 Bitesize Science - Circulation : Read. Your Heart & Circulatory System. Listen Did you give your friends valentines and little heart-shaped candies on Valentine's Day? 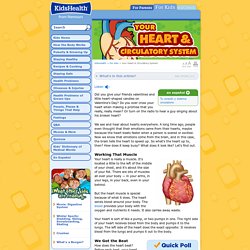 Do you ever cross your heart when making a promise that you really, really mean? Or turn on the radio to hear a guy singing about his broken heart? We see and hear about hearts everywhere. A long time ago, people even thought that their emotions came from their hearts, maybe because the heart beats faster when a person is scared or excited. Working That Muscle Your heart is really a muscle. But the heart muscle is special because of what it does. Your heart is sort of like a pump, or two pumps in one. <a href=" you ever listened to your heartbeat using a stethoscope? We Got the Beat How does the heart beat? Heart Parts The heart is made up of four different blood-filled areas, and each of these areas is called a chamber.

The two chambers on the bottom are called the ventricles (say: VEN-trih-kulz). DONATING BLOOD. Circulatory system. Anatomy of the Urinary System. Click Image to Enlarge How do the kidneys and urinary system work? 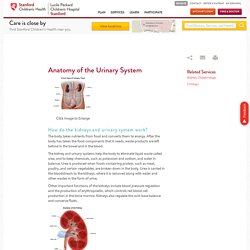 The body takes nutrients from food and converts them to energy. After the body has taken the food components that it needs, waste products are left behind in the bowel and in the blood. The kidney and urinary systems help the body to eliminate liquid waste called urea, and to keep chemicals, such as potassium and sodium, and water in balance. Urea is produced when foods containing protein, such as meat, poultry, and certain vegetables, are broken down in the body. Other important functions of the kidneys include blood pressure regulation and the production of erythropoietin, which controls red blood cell production in the bone marrow.

Kidney and urinary system parts and their functions: Two kidneys. Facts about urine: Adults pass about a quart and a half of urine each day, depending on the fluids and foods consumed.The volume of urine formed at night is about half that formed in the daytime.Normal urine is sterile. The Bladder.