In Relation to Cancer

Tumor With Teeth Found In Renaissance Graveyard. An ovarian tumor (teratoma) containing at least five teeth, and possibly some bone fragments, has been dug up in a graveyard in Lisbon, Portugal. 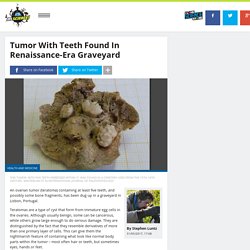 Teratomas are a type of cyst that form from immature egg cells in the ovaries. Although usually benign, some can be cancerous, while others grow large enough to do serious damage. They are distinguished by the fact that they resemble derivatives of more than one primary layer of cells. This can give them the nightmarish feature of containing what look like normal body parts within the tumor – most often hair or teeth, but sometimes eyes, hands or feet.

During 2010-2011, 42 bodies buried outside the Church and Convent of Carmo, Lisbon, were excavated. The archaeologists digging up the site recognized they had found something unusual and sent it to the University of Coimbra (one of the few university's in the world to predate the cemetery) to be examined. Garlic Is Better Than Non-Toxic; It’s Extremely Beneficial – REALfarmacy.com. By PAUL FASSA A little bit of knowledge is a dangerous thing when it overlooks all the details of the complete picture. 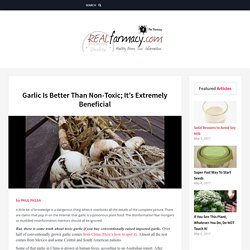 There are claims that pop in on the internet that garlic is a poisonous plant food. Scientists in Amsterdam Just Destroyed Breast Cancer Tumors in 11 Days Without Chemo. Research presented by Professor Nigel Bundred at the European Breast Cancer Conference in Amsterdam revealed that they had tested the effectiveness of a pair of drugs known as Herceptin (a.k.a trastuzumab) and Lapatinib. 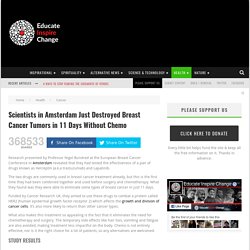 The two drugs are commonly used in breast cancer treatment already, but this is the first time they had been combined together and used before surgery and chemotherapy. What they found was they were able to eliminate some types of breast cancer in just 11 days. Funded by Cancer Research UK, they aimed to use these drugs to combat a protein called HER2 (human epidermal growth factor receptor 2) which affects the growth and division of cancer cells. It’s also more likely to return than other cancer types. What also makes this treatment so appealing is the fact that it eliminates the need for chemotherapy and surgery. 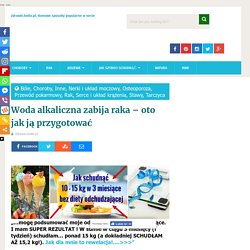 Disturbing: Researchers Finally Confirm That Cancer Is A Purely Man-Made Disease. Researchers from the University Of Manchester, United Kingdom, have concluded that cancer is a purely modern, man-made disease. 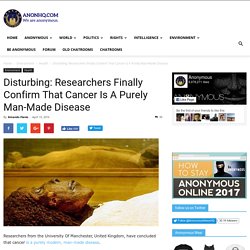 In the United Kingdom alone, Cancer claims more than 150,000 lives each year. Statistics also show that about one in three people in the United Kingdom is likely to get cancer. The researchers spent a great deal of time studying mummies, fossils and classical literature before arriving at their conclusion. The researchers said the disease is a man-made disease fuelled by the excesses of modern life. Cancergåtan är löst - TV Helse i Sverige. Why Don’t The Amish Get Cancer? Share Tweet Email A recent study published in the journal Cancer Causes and Control has revealed that Amish people have virtually no cancer within their population, and are considered the most healthy people in America. 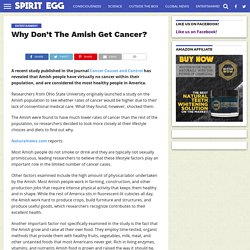 Researchers from Ohio State University originally launched a study on the Amish population to see whether rates of cancer would be higher due to their lack of conventional medical care. What they found, however, shocked them. Now Playing: The Truth About Cancer: A Global Quest 9 part docu-series. Starve Cancer To Death By Removing This One Thing From Your Diet – Natural Healing. Cancer rates have been rapidly rising throughout the years here lately and it seems there are many factors causing this. 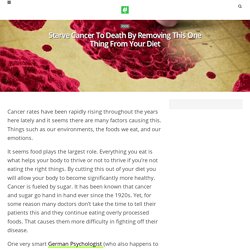 Things such as our environments, the foods we eat, and our emotions. It seems food plays the largest role. Everything you eat is what helps your body to thrive or not to thrive if you’re not eating the right things. Now Playing: The Truth About Cancer: A Global Quest 9 part docu-series. Medical Breakthrough: Any Type Of Cancer Can Be Cured In Just 2-16 Weeks – SPIRIT EGG. Share Tweet Email. 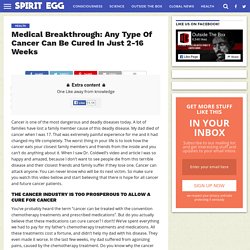 The Endocannabinoid System and How THC Kills Cancer. By Marco Torres Guest Writer for Wake Up World There are close to 20,000 studies on cannabinoids in the pubmed database, and few scientists who concentrate their work around cannabinoids can deny the tremendous therapeutic potential of cannabis. 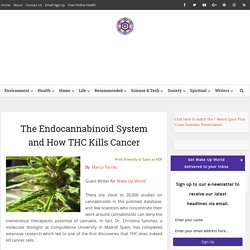 In fact, Dr. Christina Sanchez, a molecular biologist at Compultense University in Madrid Spain, has completed extensive research which led to one of the first discoveries that THC does indeed kill cancer cells. The endocannabinoid system is a group of receptors in the brain that are involved in a variety of physiological processes including appetite, pain-sensation, mood, and memory. Early Signs that Cancer is Growing in Your Body - Good Morning Center. Routine tests are not the only way to detect early cancer. 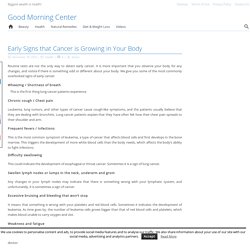 It is more important that you observe your body for any changes, and notice if there is something odd or different about your body. We give you some of the most commonly overlooked signs of early cancer: Wheezing / Shortness of breath This is the first thing lung cancer patients experience. This DIET Kills Cancer Cells and Cured Thousands of Cancer Patients in 42 Days! - ORGANIC AND HEALTHY. Rudolf Breuss was an Austrian doctor best known for his dedication to finding a natural cancer cure.

His years of study led him to develop a 42-day juicing diet designed to kill developing cancer cells. Since its introduction in 1980, more than 45,000 patients have reportedly found success with the treatment. The Breuss Total Cancer Treatment is a very rigid diet of fruits, vegetables and herbs that a person takes in liquid form for 42 days. Because cancer cells have a very different metabolism than normal cells, the Breuss diet is designed to starve the cancer cells to death by not providing any solid food proteins.

But the diet does not harm normal cells. Here Is How Mixing Baking Soda And Lemon Can Save 1000s Of Lives Each Year... Lemon and Baking soda Miraculous combination is 10,000 times stronger than Chemotherapy! Why do we not know about this? Because there are organizations that continue to profit from disease. Research: Plants Cure Cancer, Not Chemicals. By Sayer Ji Contributing Writer for Wake Up World Unbeknownst to most, a Copernican revolution has already taken place in cancer theory. Today, the weight of evidence indicates that plants and not chemicals are the solution for reversing the global cancer epidemic. Our understanding of what causes cancer has undergone something akin to a Copernican revolution in the past decade.

He suggests that the only objective of the cancer industry is profit, which is shared among Big Pharma, doctors, healthcare facilities and other participants in this industry. The conventional cancer treatments consist of taking chemotherapy toxins in the system, radiating the body with ions or removal of certain body parts, or a combination of all methods, in a great number of cases. Dr. In fact, Dr. As a result of his long research, he concluded that conventional cancer therapy reduces life expectancy and accelerates the deterioration of the system.

After losing several family members to cancer (including his mother and father), Ty refused to accept the notion that chemotherapy, radiation, and surgery were the most effective treatments available for cancer patients. He began a quest to learn all he possibly could about alternative cancer treatments and the medical industry. Potential 'universal' blood test for cancer discovered. The Lymphocyte Genome Sensitivity (LGS) test looks at white blood cells and measures the damage caused to their DNA when subjected to different intensities of ultraviolet light (UVA), which is known to damage DNA.

The results of the empirical study show a clear distinction between the damage to the white blood cells from patients with cancer, with pre-cancerous conditions and from healthy patients. (Stock image). Researchers from the University of Bradford have devised a simple blood test that can be used to diagnose whether people have cancer or not. The test will enable doctors to rule out cancer in patients presenting with certain symptoms, saving time and preventing costly and unnecessary invasive procedures such as colonoscopies and biopsies being carried out. Alternatively, it could be a useful aid for investigating patients who are suspected of having a cancer that is currently hard to diagnose.

The study looked at blood samples taken from 208 individuals. Story Source: New wonder drug matches and kills all kinds of cancer — human testing starts 2014. Stanford researchers are on track to begin human trials of a potentially potent new weapon against cancer, and would-be participants are flooding in following the Post’s initial report on the discovery. The progress comes just two months after the groundbreaking study by Dr Irv Weissman, who developed an antibody that breaks down a cancer’s defense mechanisms in the body. A protein called CD47 tells the body not to “eat” the cancer, but the antibody developed by Dr Weissman blocks CD47 and frees up immune cells called macrophages — which can then engulf the deadly cells.

The new research shows the miraculous macrophages effectively act as intelligence gatherers for the body, pointing out cancerous cells to cancer-fighting “killer T” cells. The T cells then “learn” to hunt down and attack the cancer, the researchers claim. The clinical implications of the process could be profound in the war on cancer. Could turmeric really boost your health? Image copyright iStock Bold health claims have been made for the power of turmeric. Piątka ogrodowych ziół zwalczających raka - Wolna Polska. Korzeń mniszka lekarskiego skuteczniejszy od chemioterapii - Wolna Polska. Shocking Revelation! Study Reveals Vegetarian Blood Is 8x More Effective At Killing Cancer Cells.

Treating Cancer Naturally: How It Can Fail – REALfarmacy.com. THIS Vitamin Kills Cancer Cells But Is Illegal In The US! ~ Organic And Healthy. Cancer thrives in an Acidic Environment. Do This To Make Your Body Alkaline... Do You Know Which Plastics Have The Highest Cancer Risk? Soda + syrop klonowy Niszczenie raka metodą wysokiego pH Niszczenie raka Chlorkiem cezu. Tam gdzie grzyb, tam guz nowotworowy. Jak się go pozbyć? – InfoZdrowie.

Your Body’s Acidic pH is Allowing Cancer to Multiply. Here is How to Restore Balance Fast. How To Starve Cancer To Death By Removing This One Thing From Your Diet. Healthy News and Information. So . . . It Turns Out Cancer Can Be Killed After All. Black Seed Oil Cures Many Cancers According to Numerous Studies. Healthy News and Information. The Root Cause Of Cancer and Why Has it Been Kept a Secret! Using Baking Soda to Help Beat Cancer Naturally. Why “Fighting Cancer” Is Bad For Your Health.