Discourse Pragmatics - Politeness. Politeness The words 'polite' and 'politeness' can be traced back to general notions related to cleanliness or to smooth, polished, refined, planned, civilized, or courtly activity. 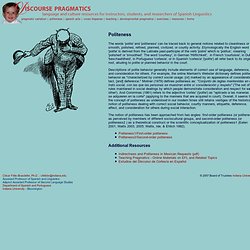 Etymologically the English word 'polite' is derived from the Latinate past-participle of the verb 'polire' which is 'politus', meaning 'polished' or 'smoothed'. The word 'courtesy', in German 'Höflichkeit', in French 'courtoisie', in Dutch 'beschaafdheid', in Portuguese 'cortesia', or in Spanish 'cortesía' ('polite') all refer back to its original root, alluding to polite or planned behavior in the court.

Descriptions of polite behavior generally include elements of correct use of language, deference, and consideration for others. For example, the online Merriam's Webster dictionary defines polite behavior as "characterized by correct social usage; [or] marked by an appearance of consideration, tact, [and] deference. " Additional Resources. Linguistic Politeness Research Group - Definitions of Politeness. It is remarkably difficult to come to a definition of politeness and impoliteness. 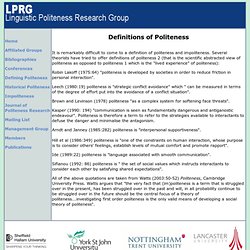 Several theorists have tried to offer definitions of politeness 2 (that is the scientific abstracted view of politeness as opposed to politeness 1 which is the "lived experience" of politeness): Robin Lakoff (1975:64) "politeness is developed by societies in order to reduce friction in personal interaction". Leech (1980:19) politeness is "strategic conflict avoidance" which " can be measured in terms of the degree of effort put into the avoidance of a conflict situation". Brown and Levinson (1978) politeness "as a complex system for softening face threats". Kasper (1990: 194) "communication is seen as fundamentally dangerous and antiganostic endeavour". Arndt and Janney (1985:282) politeness is "interpersonal supportiveness". Hill et al (1986:349) politeness is "one of the constraints on human interaction, whose purpose is to consider others' feelings, establish levels of mutual comfort and promote rapport".

Behrends, Wissenschaftszentrum Berlin E-Mail: <behrends@wzb.eu> Sociologists, philosophers, historians, and anthropologists met at the Social Science Center (WZB), Berlin, to discuss possibilities for an interdisciplinary and comparative investigation of the notion of “civility” in the modern era. The workshop consisted of six thematic panels as well as the presentation of a prospective project on civility that is being prepared by the convening researchers.

In his opening remarks DIETER GOSEWINKEL (WZB) outlined the main problems and prospects of research on the concept. He discussed the problems of defining the “civility” and finding the adequate fields for empirical research. The workshop’s first panel explored the history of the concept. The second panel dealt with the connection between civility and social rights. HELMUT DUBIEL (Giessen) and MERVYN FROST (King’s College London) explored the connection between civility and human rights on the third panel.