Online buying soars as coronavirus spreads around the world. With billions of people under stay-at-home directives during the coronavirus pandemic, ecommerce is booming across the planet. 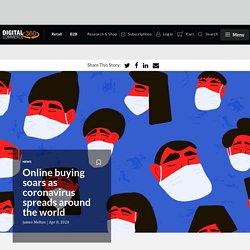 In North America, the number of online orders for web-only online retailers were up 52% year over year in the United States and Canada for the 2 weeks of March 22 through April 4, according to an online tracker from marketing platform Emarsys and analytics platform GoodData. Our lives after the coronavirus pandemic.

I do not see anything positive in this article, at the same time I am glad that I learned this information. For me, if - I know this information, it means that I will not be so naive in everything that happens. For people who care about freedom, privacy and personal rights, the world after the coronavirus looks much more disturbing. The trend towards nationalism and independence will continue, especially since populists can use the fear of “external” and “foreign”. One aspect of life that has been hit hard by the outbreak is culture, or rather, religion. People around the world will use COVID-19 as a good reason to require universal health care. – tetianatetiana

How Pandemics Change History. I believe that this is something that also does bring out the highest qualities. 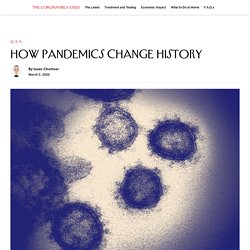 Indeed, novels are also written about these major events. Coronavirus in Canada: What you need to know about grocery shopping during the pandemic. Do you need to disinfect your purchases?

For a long time during this pandemic, I asked myself what I need to know or do when I make a grocery store. I think this information is very useful right now. But for me this information from the article “Wipe clean with disinfectant wipes or bleaching solution” is very interesting - about BLEACH. Because in Canada I did not feel bleach in public places and I think that it is not used for disinfection. I would like all people to take care of themselves and thereby help everyone with these actions. – tetianatetiana 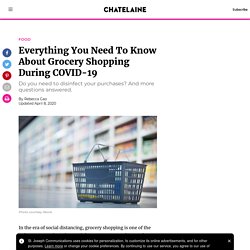 Photo courtesy iStock. In the era of social distancing, grocery shopping is one of the only reasons to leave home right now. Coronavirus plunges Canada's economy into the abyss. In every economic crisis over the last century, people have ultimately turned to the world of medicine to help make sense of the fear and uncertainty around them. 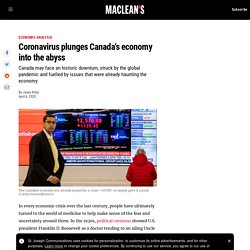 In the 1930s, political cartoons showed U.S. president Franklin D. Roosevelt as a doctor tending to an ailing Uncle Sam, whose bandages carried words like “banking” and “depression.” When the 1990s currency crisis in southeast Asia threatened to infect the rest of the world and trigger a global meltdown, economists and investors took to calling it the “Asian flu.” And in 2008, as America’s economy was felled by the financial crisis, then president Barack Obama urged lawmakers to “provide a blood infusion” to “make sure that the patient is stabilized.”

Virtual Museums and Concerts You Can Now See Online. Earth Matters - How the Coronavirus Is (and Is Not) Affecting the Environment. The coronavirus (COVID-19) epidemic is first and foremost an issue of human health and safety. 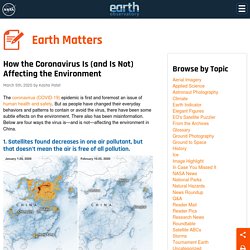 But as people have changed their everyday behaviors and patterns to contain or avoid the virus, there have been some subtle effects on the environment. There also has been misinformation. Below are four ways the virus is—and is not—affecting the environment in China. 21 Million Fewer Cellphone Users in China May Suggest a High CCP Virus Death Toll. The number of Chinese cellphone users dropped by 21 million in the past three months, Beijing authorities announced on March 19.

For me - from this article it is more important that the government wants to control people over the phone, and they justify it to society because of the coronavirus. That is, initially the government wanted more control over ordinary people, and after that they found how to present it to residents so that they agreed (because of their health, a new virus). "The Chinese regime requires all Chinese to use their cellphones to generate a health code. Only with a green health code are Chinese allowed to move in China now" – tetianatetiana

Deaths due to the CCP virus may have contributed to the high number of account closings. 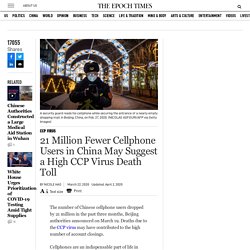 Cellphones are an indispensable part of life in China. “The digitization level is very high in China. People can’t survive without a cellphone,” Tang Jingyuan, a U.S. -based China affairs commentator, told The Epoch Times on March 21. “The Chinese regime requires all Chinese to use their cellphones to generate a health code. Bill Gates: La prochaine épidémie ? Nous ne sommes pas prêts. DAVID ICKE - THE TRUTH BEHIND THE CORONAVIRUS PANDEMIC: COVID-19 LOCKDOWN & THE ECONOMIC CRASH. 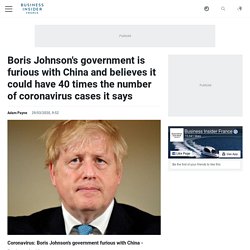 "Some of the reporting from China was not clear about the scale, the nature, the infectiousness of this," Minister for the Cabinet Office Michael Gove told the BBC.Scientists have reportedly told Johnson that China could have up to 40 times the number of cases it says.Estimates from Radio Free Asia show that up to 42,000 bodies have been cremated in Wuhan since the crisis.It could prompt the prime minister to abandon his deal with the Chinese telecoms giant Huawei.Visit Business Insider's homepage for more stories.

UK Prime Minister Boris Johnson's government is said to be furious over China's handling of the novel coronavirus, with one British official quoted on Sunday saying Beijing would face a "reckoning" once the COVID-19 crisis was over. Burger King's moldy Whopper ad is dividing marketing experts. Burger King made headlines when it launched its latest ad — showing a Whopper going moldy — on Wednesday. 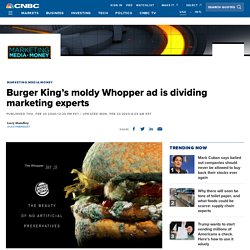 The spot was launched as the Restaurant Brands International chain announced it would remove artificial colors, flavors and preservatives from its signature sandwich in the U.S. More than 400 outlets already have the additive-free burger, and the company expects all Whoppers to follow by the end of the year. But featuring mold in a food ad breaks all the rules of meal promotion, which usually involves beautifully-shot items that have been set up by stylists. CNBC spoke to several experts to get their reactions. Some welcomed the move to show a “real” burger beyond its prime. Huib van Bockel, founder of drinks brand Tenzing Natural Energy and a former Red Bull and Unilever food marketing executive, praised its transparency.

The Dark Side of Tulum. Lauren Singer, Founder of Package Free, Is Leading the Zero-Waste Revolution. Donating clothes: 10 ways to give your unwanted clothing items a second life  (This story is presented by .) 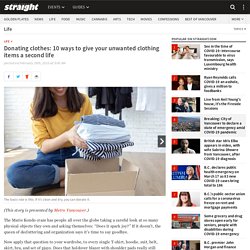 The Marie Kondo craze has people all over the globe taking a careful look at so many physical objects they own and asking themselves: “Does it spark joy?” If it doesn’t, the queen of decluttering and organization says it’s time to say goodbye. Now apply that question to your wardrobe, to every single T-shirt, hoodie, suit, belt, skirt, bra, and set of pjays. Europe embarks on economic revolution with landmark climate law to make region climate neutral by 2050. Europe wants to make it illegal by 2050 to emit more greenhouse gases than can be removed from the atmosphere. 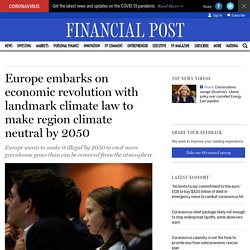 European Commission President Ursula von der Leyen unveiled a draft law on Wednesday that would commit the region to become the first climate-neutral continent by the middle of the century. The legal proposal is the cornerstone of the bloc’s Green Deal, a far-reaching strategy that foresees a radical overhaul of the European economy over the next three decades. “The Climate Law is the legal translation of our political commitment, and sets us irreversibly on the path to a more sustainable future,” von der Leyen said in a statement. “It offers predictability and transparency for European industry and investors. China normalises operations after COVID-19 spread.