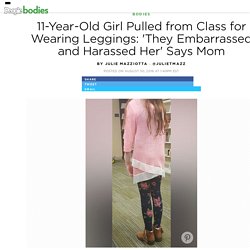 Kimberly Jones posted about the incident on Facebook Wednesday after her daughter Bella texted her, distraught, because she was removed from her sixth grade class and forced to wear sweatpants over her leggings, and then told she could not call her mom. Damn those dress codes! Young feminists are taking a stand. Some may question my use of the term “feminist” to describe the actions of these middle school girls, and others who have been raising a hue and cry about this in schools across the U.S. and Canada. 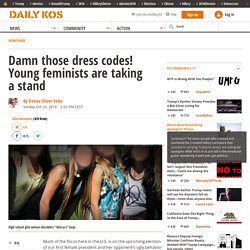 But it is apt, since questions of women’s rights to our own personhood, objectification of us as women, and “slut shaming” are clearly part of a long history of women’s battles to fight for our rights and are fundamental in feminist movements against patriarchy. I flashed back to Amelia Bloomer, whose bloomer costumes for women were mocked harshly. So much of what we, as older feminists have been fighting for, has become part and parcel of the way many young women and girls view the world, without having to adopt a specific label. They are using the language. To put my response to what my students told me in context: I don’t have children. My students on campus wear whatever suits them. I told them I had. Hi, I'm Maggie. Gryphon Gazette : Is dress code the best road? At St. 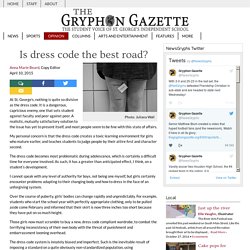 George’s, nothing is quite so divisive as the dress code. It is a dangerous, capricious enemy, one that sets student against faculty and peer against peer. A realistic, mutually satisfactory solution to the issue has yet to present itself, and most people seem to be fine with this state of affairs. My personal concern is that the dress code creates a toxic learning environment for girls who mature earlier, and teaches students to judge people by their attire first and character second.

The dress code becomes most problematic during adolescence, which is certainly a difficult time for everyone involved. I cannot speak with any level of authority for boys, not being one myself, but girls certainly encounter problems adapting to their changing body and how to dress in the face of an unforgiving system. Over the course of puberty, girls’ bodies can change rapidly and unpredictably.

The dress code system is innately biased and imperfect. The problem does not end there. High School Principal Says Dress Codes Help 'Preserve Girls' Virginity. A high school principal from Grand Rapids, Michigan, says he stands by his controversial opinion that girls should dress modestly to preserve their virginity. 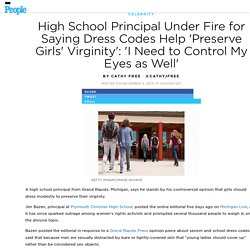 Jim Bazen, principal at Plymouth Christian High School, posted the online editorial five days ago on Michigan Live, and it has since sparked outrage among women’s rights activists and prompted several thousand people to weigh in on the divisive topic. Bazen posted the editorial in response to a Grand Rapids Press opinion piece about sexism and school dress codes. He said that because men are sexually distracted by bare or tightly-covered skin that “young ladies should cover up” rather than be considered sex objects.

“I stand by what I wrote because I think that dressing provocatively is degrading to women,” Bazen, 48, tells PEOPLE. “Now, I also wish I’d added, ‘Men, you need to control your eyes. “I’m coming at this from a biblical and Christian perspective,” he tells PEOPLE exclusively. “Dr. Middle School Girls Wear 'I Am More Than a Distraction' Shirts to Protest Dress Code. A group of girls at Frederick County, Maryland’s Urbana Middle School are protesting their school’s dress code with shirts that read “I Am Not a Distraction.” 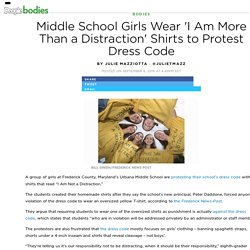 The students created their homemade shirts after they say the school’s new principal, Peter Daddone, forced anyone in violation of the dress code to wear an oversized yellow T-shirt, according to the Frederick News-Post. They argue that requiring students to wear one of the oversized shirts as punishment is actually against the dress code, which states that students “who are in violation will be addressed privately by an administrator or staff member.” The protestors are also frustrated that the dress code mostly focuses on girls’ clothing – banning spaghetti straps, shorts under a 4-inch inseam and shirts that reveal cleavage – not boys’. “I think the basis of the policy is keeping a safe, nurturing learning environment,” Saunders says. Wolfpacket : Dress Code Unfairly Targets Female Students. Students at CHS are consistently reminded that even though the weather may be warm, the dress code needs to be followed, especially by the “ladies.” 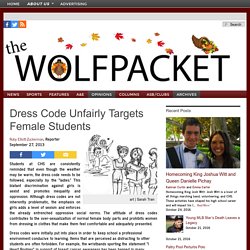 This blatant discrimination against girls is sexist and promotes inequality and oppression. Although dress codes are not inherently problematic, the emphasis on girls adds a level of sexism and enforces the already entrenched oppressive social norms. The attitude of dress codes contributes to the over-sexualization of normal female body parts and prohibits women from dressing in clothes that make them feel comfortable and adequately presented. Dress codes were initially put into place in order to keep school a professional environment conducive to learning. Items that are perceived as distracting to other students are often forbidden. While the goal of creating a professional school environment is a worthy one, by implying that male students will be distracted by normal female bodies perpetuates certain stereotypes.