"What If" planning tools 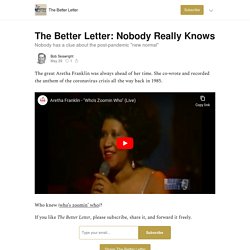 She co-wrote and recorded the anthem of the coronavirus crisis all the way back in 1985. Who knew (who’s zoomin’ who)? If you like The Better Letter, please subscribe, share it, and forward it freely. Share The Better Letter. When SimCity got serious: the story of Maxis Business Simulations and SimRefinery. Thumbnail of the SimRefinery title screen.1 SimCity wasn’t meant to be taken seriously. 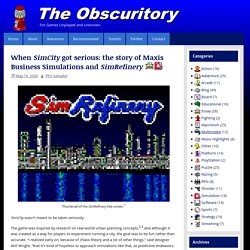 The game was inspired by research on real-world urban planning concepts,2,3 and although it was created as a way for players to experiment running a city, the goal was to be fun rather than accurate. “I realized early on, because of chaos theory and a lot of other things,” said designer Will Wright, “that it’s kind of hopeless to approach simulations like that, as predictive endeavors. Gro. ReLogoGettingStarted. STELLA Programming Language. Motivation Developers of intelligent applications face a problem today, since none of the currently ``healthy'' languages such as C++ or Java provide adequate environments to support symbolic programming tasks. 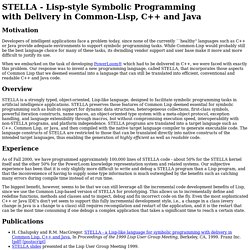 While Common-Lisp would probably still be the best language choice for many of these tasks, its dwindling vendor support and user base make it more and more difficult to justify its use. Knowledge Interchange Format. KIF has a declarative semantics. 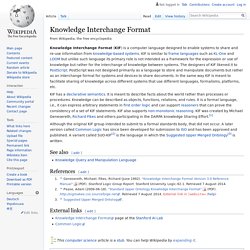 It is meant to describe facts about the world rather than processes or procedures. Knowledge can be described as objects, functions, relations, and rules. It is a formal language, i.e., it can express arbitrary statements in first order logic and can support reasoners that can prove the consistency of a set of KIF statements. KIF also supports non-monotonic reasoning. KIF was created by Michael Genesereth, Richard Fikes and others participating in the DARPA knowledge Sharing Effort.[1] Although the original KIF group intended to submit to a formal standards body, that did not occur. See also[edit] Knowledge Query and Manipulation Language References[edit] External links[edit] A 1986 video on software design methods pertaining to specific systems using expert knowledge. 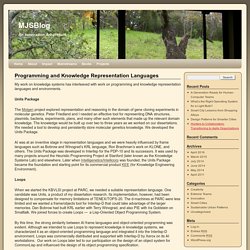 Units Package. Complexity Explorables. LOOPY: a tool for thinking in systems. That big spending bill contained a buried gem. Everything You Wanted to Know About Predictive Analytics (But Were Afraid to Ask): Christopher Penn on Marketing Smarts [Podcast] RAND TR825. North Korea: The War Game - The Atlantic. On the third weekend in March, while America was transfixed by the most exciting NCAA basketball tournament in years, Secretary of State Condoleezza Rice was in the Far East, in the midst of a series of meetings with her opposite numbers in six Asian countries. 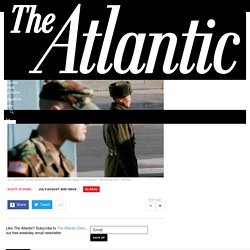 Arriving in Seoul, South Korea, on Saturday, she boarded a U.S. Army Black Hawk helicopter and flew to Command Post Tango, the underground bunker that would be the nerve center for the U.S. military in the event of a war against North Korea. Stanford Computational Journalism Lab. Steps to Applying Threat Intelligence. 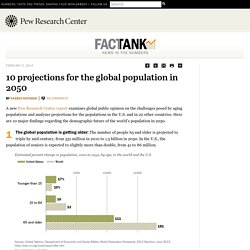 Here are 10 major findings regarding the demographic future of the world’s population in 2050. 1The global population is getting older: The number of people 65 and older is projected to triple by mid-century, from 531 million in 2010 to 1.5 billion in 2050. In the U.S., the population of seniors is expected to slightly more than double, from 41 to 86 million. 2The world is graying faster than the U.S.: The global median age, eight years less than in the U.S. in 2010, is projected to be only five years less by 2050. 3Who will be among the oldest?

4Trading young for old: Most countries, including the U.S., are projected to see the share of their population that is 65 and older surpass the share that is younger than 15 by mid-century. “You Have to Lead from Everywhere” Executive Summary Reprint: R1011D When responding to a complex, fast-moving crisis, leaders must constantly adapt their mental models and create a “unity of effort,” argues Allen, a retired U.S. 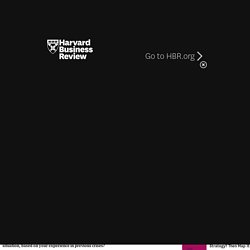 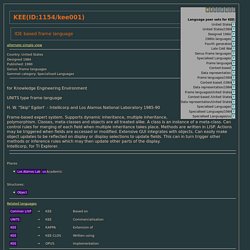