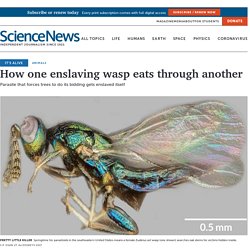 But in certain oak trees, the parasites themselves get played. “Creepy and awesome,” says Kelly Weinersmith of Rice University in Houston, who has helped reveal a Russian doll of nested parasitisms. The saga begins when two majestic live oak species in the southeastern United States send out new shoots, and female crypt gall wasps (Bassettia pallida) arrive to lay eggs.

A wasp mom uses the delivery ­end of her reproductive tract to drill through tree bark, injecting each of her eggs into a separate spot in the oak. Wasp biochemistry induces the tree to form a botanical womb with an edible lining largely free of oak defense chemicals. Another wasp species, a newly discovered Euderus, arrives, barely visible to the naked eye but “amazingly iridescent,” Weinersmith says. Story continues below image. Neural parasitology: how parasites manipulate host behaviour. The ability of parasites to alter the behaviour of their hosts fascinates both scientists and non-scientists alike. 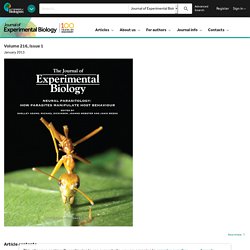 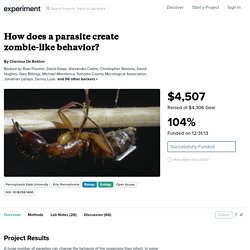 You must enable javascript to back a project</div> Pledged Funded Goal Days Success! Do Cats Control My Mind? - James Hamblin. New neuroscience research says that Toxo—the cysts in our brains from cats—can improve our self-control. 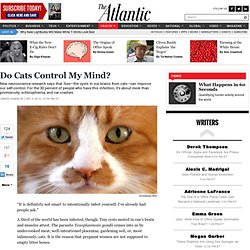 For the 30 percent of people who have this infection, it's about more than promiscuity, schizophrenia, and car crashes. “It is definitely not smart to intentionally infect yourself. I’ve already had people ask.” A third of the world has been infected, though. Tiny cysts nested in one's brain and muscles attest. Toxoplasma: Rats for Outdoor Cats. When a male rat senses the presence of a fetching female rat, a certain region of his brain lights up with neural activity, in anticipation of romance. 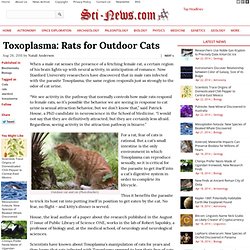 Now Stanford University researchers have discovered that in male rats infected with the parasite Toxoplasma, the same region responds just as strongly to the odor of cat urine. Toxoplasmosis. Getting to the bottom of the zombie ant phenomenon. It may sound like science fiction, but the body snatchers are for real. 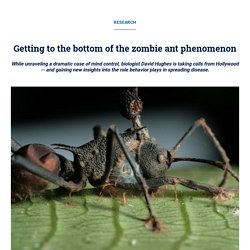 Gut microbes influence behavior. Gut bacteria linked to behavior: That anxiety may be in your gut, not in your head. For the first time, researchers at McMaster University have conclusive evidence that bacteria residing in the gut influence brain chemistry and behaviour. 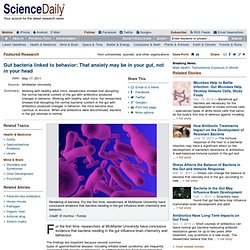 The findings are important because several common types of gastrointestinal disease, including irritable bowel syndrome, are frequently associated with anxiety or depression. In addition there has been speculation that some psychiatric disorders, such as late onset autism, may be associated with an abnormal bacterial content in the gut. "The exciting results provide stimulus for further investigating a microbial component to the causation of behavioural illnesses," said Stephen Collins, professor of medicine and associate dean research, Michael G. DeGroote School of Medicine. Collins and Premysl Bercik, assistant professor of medicine, undertook the research in the Farncombe Family Digestive Health Research Institute. Bacteria in the gut may influence brain development. A team of scientists from around the globe have found that gut bacteria may influence mammalian brain development and adult behavior. 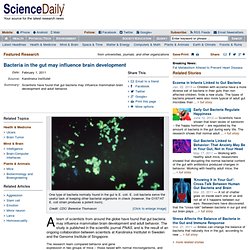 The study is published in the scientific journal PNAS, and is the result of an ongoing collaboration between scientists at Karolinska Institutet in Sweden and the Genome Institute of Singapore. That gut feeling. If aliens were to swoop in from outer space and squeeze a human down to see what we're made of, they would come to the conclusion that cell for cell, we're mostly bacteria. 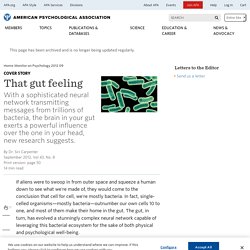 Gut bacteria may influence thoughts and behaviour – Neurophilosophy. THE human gut contains a diverse community of bacteria which colonize the large intestine in the days following birth and vastly outnumber our own cells. 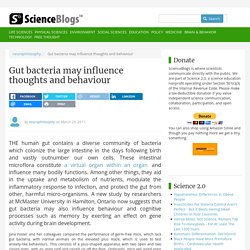 These intestinal microflora constitute a virtual organ within an organ and influence many bodily functions. Among other things, they aid in the uptake and metabolism of nutrients, modulate the inflammatory response to infection, and protect the gut from other, harmful micro-organisms. A new study by researchers at McMaster University in Hamilton, Ontario now suggests that gut bacteria may also influence behaviour and cognitive processes such as memory by exerting an effect on gene activity during brain development. Jane Foster and her colleagues compared the performance of germ-free mice, which lack gut bacteria, with normal animals on the elevated plus maze, which is used to test anxiety-like behaviours.

Microbes manipulate your mind. Microbes Manipulate Your Mind, in the July/ August issue of Scientific American MIND "The thought of parasites preying on your body or brain very likely sends shivers down your spine. Zombie Animals and the Parasites that Control Them. 12 Real Parasites That Control the Lives of Their Hosts. Attacks of the Brain-Controlling Parasites - Wired Science. Once upon a time, parasites were thought to live relatively simple lives: They hitched a ride on a host, sapping nutrients and energy but otherwise leaving it alone. But that was only part of the story. Many parasites actually take control, causing their hosts to act in self-destructive ways that further their invaders' interests.The Lymantria dispar baculovirus, for example, causes caterpillars to climb into treetops rather than hiding in bark.

When those that go uneaten by birds finally die and decompose (as pictured above), viral particles rain onto foliage below, infecting a new generation of caterpillars. "I think the reason people are a little creeped out by seeing pathogens control behavior is that we have examples of it around us all the time," said chemical ecologist Kelli Hoover of Pennsylvania State University, who describes L. dispar's gene target in a Sept. 9 Science study. Parasitic Mind Control.

Invasion Of The Mind-Controlling Zombie Parasites. Hide caption Toxoplasma gondii is a parasite, seen here in brain tissue, that can alter the behavior of the host. It can make rodents attracted to cats, leaving them vulnerable to getting eaten. Centers for Disease Control and Prevention A few months back, something terrible happened to millions of flies around Washington, D.C.