Information about zombies in history and pop culture.

Zombie. Zombies have a complex literary heritage, with antecedents ranging from Richard Matheson and H. 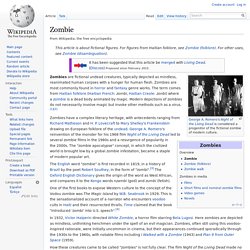 P. Lovecraft to Mary Shelley's Frankenstein drawing on European folklore of the undead. The Secret Behind Romero's Scary Zombies: 'I Made Them The Neighbors' George A. 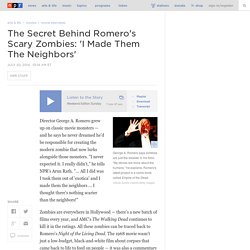 Zombies: The Real Story of the Undead. From "World War Z" to "The Walking Dead" to "Shaun of the Dead" to "Pride and Prejudice and Zombies" and countless brain-dead rip-offs, zombies — re-animated corpses with an unstoppable craving for human flesh, especially brains — have invaded pop culture like never before. 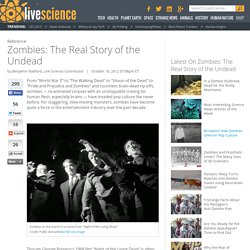 For staggering, slow-moving monsters, zombies have become quite a force in the entertainment industry over the past decade. A History of 'Real' Zombies. Zombies are all the rage these days — on television, in movies, books and now in the news. 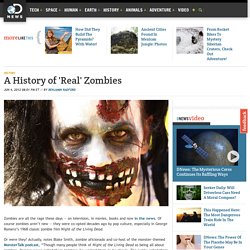 Of course zombies aren’t new — they were co-opted decades ago by pop culture, especially in George Romero’s 1968 classic zombie film Night of the Living Dead. Or were they? Actually, notes Blake Smith, zombie aficionado and co-host of the monster-themed MonsterTalk podcast, “Though many people think of Night of the Living Dead as being all about zombies, Romero never called them zombies; he wanted them to be ghouls. The public called them zombies, so the name stuck.” NEWS: Did Zombies Roam Medieval Ireland? Though many people treat the current “zombie apocalypse” as a fun pop culture meme, it’s important to realize that some people believe zombies are very real. Unlike today's malevolent movie zombies, the original Haitian zombies were not villains but victims.

DNEWS NUGGETS: Zombie Prankster Almost Shot. Zombies and the Plague — History.com Video. Max Brooks Is Not Kidding About the Zombie Apocalypse. Photo “I’ve never seen a zombie movie where someone drank from a puddle and died of explosive diarrhea.” 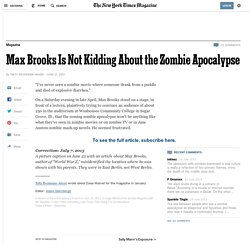 On a Saturday evening in late April, Max Brooks stood on a stage, in front of a lectern, plaintively trying to convince an audience of about 250 in the auditorium at Waubonsee Community College in Sugar Grove, Ill., that the coming zombie apocalypse won’t be anything like what they’ve seen in zombie movies or on zombie TV or in Jane Austen-zombie mash-up novels. He seemed frustrated. He’s talking about real zombies here, not the movie kind. Does the audience get that? “It’s not exciting, I get that,” he told the audience in the affable but slightly patronizing manner of an I.T. guy. Here’s a small sampling of other topics Brooks covers in his lecture: Chernobyl.

What’s clear from all this is that Brooks has a deep understanding of history and geopolitics — he isn’t just a standard-issue sci-fi author hopping on the zombie train. “Since 2001, people have been scared,” he explained. Zoinks! Tracing The History Of 'Zombie' From Haiti To The CDC : Code Switch. A still from the 1943 film I Walked With A Zombie. 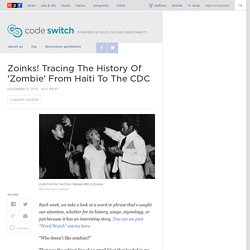 RKO/The Kobal Collection hide caption itoggle caption RKO/The Kobal Collection A still from the 1943 film I Walked With A Zombie. RKO/The Kobal Collection Each week, we take a look at a word or phrase that's caught our attention, whether for its history, usage, etymology, or just because it has an interesting story. "Who doesn't like zombies? " That was the subject line of an email blast that landed in my inbox recently from a major online retailer as it announced it was "bringing their Black Friday deals back to life. " With shows like The Walking Dead and movies like World War Z, plus a whole literary subgenre known simply as "zombie lit," the supernatural beings have been having a pop culture moment for some time now. While there's a long history and fascination with animated corpses in American literature and cinema, zombies aren't originally a product of the American imagination. 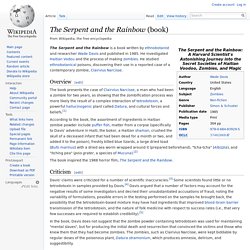 He investigated Haitian Vodou and the process of making zombies. He studied ethnobotanical poisons, discovering their use in a reported case of a contemporary zombie, Clairvius Narcisse. The book presents the case of Clairvius Narcisse, a man who had been a zombie for two years, as showing that the zombification process was more likely the result of a complex interaction of tetrodotoxin, a powerful hallucinogenic plant called Datura, and cultural forces and beliefs.[1] In the book, Davis does not suggest that the zombie powder containing tetrodotoxin was used for maintaining "mental slaves", but for producing the initial death and resurrection that convinced the victims and those who knew them that they had become zombies.