How to Cleanse Your Body from Parasites and Normalize Your Weight with Only Two Ingredients!

Fleas. Eliminating The Parasites That You Almost Certainly Have. By Thomas Corriher Parasites have far surpassed epidemic levels in the United States, with most sources estimating that a massive 85% of Americans have parasitic infections. 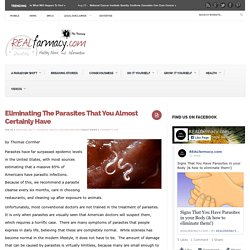 Because of this, we recommend a parasite cleanse every six months, care in choosing restaurants, and cleaning up after exposure to animals. Unfortunately, most conventional doctors are not trained in the treatment of parasites. It is only when parasites are visually seen that American doctors will suspect them, which requires a horrific case. There are many symptoms of parasites that people express in daily life, believing that these are completely normal. Identifying The Different Parasites Roundworms – Living in the stomach and intestines, these worms enter through undercooked and contaminated food. Symptoms of Parasite Infection Treatment Options If a conventional doctor believes that you have parasites, he will prescribe you an anti-parasitic pharmaceutical. Source: The Health Wyze Report Share: Comments comments. 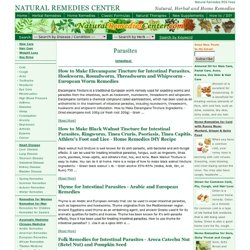 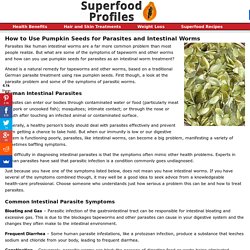 But what are some of the symptoms of tapeworm and other worms and how can you use pumpkin seeds for parasites as an intestinal worm treatment? Ahead is a natural remedy for tapeworms and other worms, based on a traditional German parasite treatment using raw pumpkin seeds. First though, a look at the parasite problem and some of the symptoms of parasitic worms. General Parasite Regimen. Antiparasitic General Regimen Summary: Use an antiparasitic regimen if parasites are suspected. 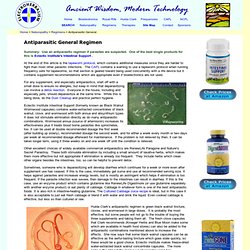 One of the best single products for this is Eclectic Institute's Intestinal Support . At the end of this article is the tapeworm protocol, which contains additional measures since they are harder to fight than most other parasitic infections. The CAFL contains a warning to use a tapeworm protocol when running frequency sets for tapeworms, so that section is geared toward being used concurrently with a rife device but it contains supplement recommendations which are appropriate even if bioelectronics are not used.

For any supplement, and especially antiparasitics, start off with a small dose to ensure no allergies, but keep in mind that deparasitizing can involve a detox reaction. Eclectic Institute Intestinal Support (formerly known as Black Walnut Wormwood capsules) contains water-extracted concentrates of black walnut, clove, and wormwood with both annua and absynthium types.

Parasites Cleanse Kit 3 Bottles (Hulda Clark) Worms and Parasites in humans and animals: natural herbal treatments. New research shows that parasites not only control the behavior of their hosts, they can change entire ecosystems to suit their needs. 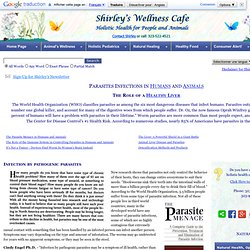 "Hookworms sink their teeth into the intestinal walls of more than a billion people every day to drink their fill of blood. " According to the World Health Organization, 3.5 billion people suffer from some type of parasitic infection. Not all of these people live in third world countries; many in the developed world have any number of parasitic infections, some of which are so highly contagious that extremely casual contact with something that has been handled by an infected person can infect another person. Symptoms may vary depending on the type and amount of infestation. The worms may go undetected for years with no apparent symptoms, or they may be seen in the stool. Cindy Engel Ph.D. - "Infection by pathogenic parasites may be a symptom of ill health, rather than the simple or single cause.

Adult worms live in the lumen of the small intestine. Dr.

Cannot cure pinworms... losing hope at Parasites Support Forum (MessageID: 1891300) 1st I would no way assume you have "just" pinworms. 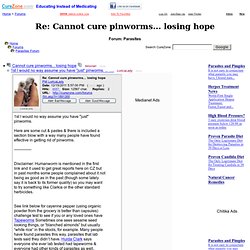 Here are some cut & pastes & there is included a section blow with a way many people have found effective in getting rid of pinworms. Disclaimer: Humanworm is mentioned in the first link and it used to get great reports here on CZ but in past months some people complained about it not being as good as in the past (though some lately say it is back to its former quality) so you may want to try something like Clarkia or the other standard herbicides.

See link below for cayenne pepper (using organic powder from the grocery is better than capsules) challenge test to see if you or any loved ones have Tapeworms Sometimes one sees sesame seed looking things, or “blanched almonds” but usually “white rice” in the stools, for example.