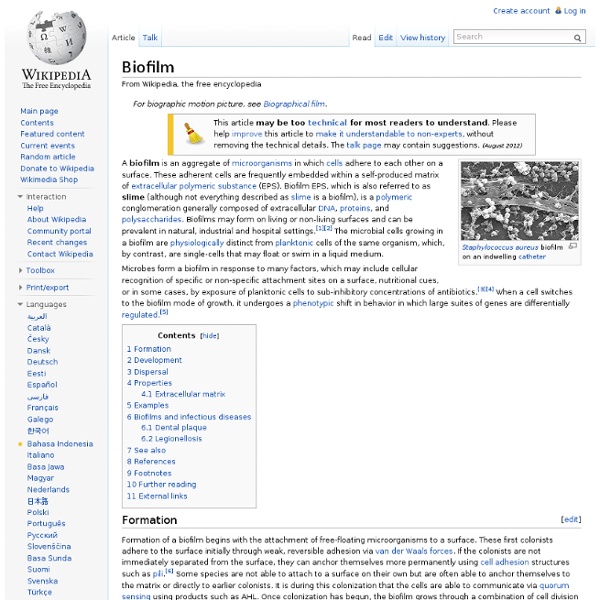 IUPAC definition Aggregate of microorganisms in which cells that are frequently embedded within a self-produced matrix of extracellular polymeric substance (EPS) adhere to each other and/or to a surface. Note 1: A biofilm is a fixed system that can be adapted internally to environmental conditions by its inhabitants. Note 2: The self-produced matrix of extracellular polymeric substance, which is also referred to as slime, is a polymeric conglomeration generally composed of extracellularbiopolymers in various structural forms.[1] Microbes form a biofilm in response to many factors, which may include cellular recognition of specific or non-specific attachment sites on a surface, nutritional cues, or in some cases, by exposure of planktonic cells to sub-inhibitory concentrations of antibiotics.[4][5] When a cell switches to the biofilm mode of growth, it undergoes a phenotypic shift in behavior in which large suites of genes are differentially regulated.[6] Formation[edit] Development[edit] Related:  Morgellons & Lyme • Research/parasites&protocol (theories) • .caisson test

Newly Discovered Rope Worm Infection Wow. This is amazing. And horrifying. Notice that he mentions the role of heavy metals toward the end. Obviously, a heavy metal cleanse such as EDTA and DMSA would be helpful in the process of cleansing and eliminating. These are the main ingredients of the most effective anti-parasite formulas. I've also bolded a few interesting things about these herbs that we might want to keep in mind. Parasite CleanseGreen hulls of black walnut: is known to have powerful effects on killing many varieties of parasites.The dried and ground green hull of the Black Walnut contains tannin, which is organic iodine, as well as juglandin.

Glutathione Thiol groups are reducing agents, existing at a concentration of approximately 5 mM in animal cells. Glutathione reduces disulfide bonds formed within cytoplasmic proteins to cysteines by serving as an electron donor. In the process, glutathione is converted to its oxidized form, glutathione disulfide (GSSG), also called L-(–)-glutathione. Once oxidized, glutathione can be reduced back by glutathione reductase, using NADPH as an electron donor.[3] The ratio of reduced glutathione to oxidized glutathione within cells is often used as a measure of cellular toxicity.[4] Biosynthesis[edit] Glutathione is not an essential nutrient, since it can be synthesized in the body from the amino acids L-cysteine, L-glutamic acid, and glycine. Cells make glutathione in two adenosine triphosphate (ATP)-dependent steps: First, gamma-glutamylcysteine is synthesized from L-glutamate and cysteine via the enzyme gamma-glutamylcysteine synthetase (glutamate cysteine ligase, GCL). Function[edit] Cancer[edit]

Hospital Acquired Infections Costly, Preventable A program to reduce hospital-acquired infections can save an average of $1.1 million a year, according to results of a new study. In 2002, one in every 20 hospitalized patients developed a healthcare-associated infection (HAI), making HAIs one of the leading causes of death and illness in the U.S., and costing up to $33 billion dollars, according to the Department of Health and Human Services (HHS). The 1.7 million reported HAIs resulted in an estimated 99,000 deaths in that year, wrote Hugh Waters, MS, PhD, of Johns Hopkins Bloomberg School of Public Health, and colleagues in the September/October issue of the American Journal of Medical Quality. There's been "substantial uncertainty" among hospitals on how reducing infections would impact their financial performance, according to the study authors. "Without a strong business case, hospitals may be reluctant to embark on meaningful efforts to improve safety," they wrote. The Keystone program has two main components: Emily P. false

Bacteria, Biofilms, Antibiotic Resistance and Infections Bacteria are interesting and abundant microorganisms that sometimes exist as separate cells. Many bacteria grow in colonies called biofilms, however. In a biofilm, bacteria are attached to each other and to a solid surface, They are also surrounded by a protective material which they secrete. Biofilms form in our bodies. Where Are Biofilms Found? Biofilms form in many places. A biofilm often has a slimy consistency and can be large enough for us to see without magnification. How Does a Biofilm Form? The first step in biofilm production is the formation of a conditioning film on a surface. Free-floating bacteria (also called planktonic bacteria) land on the conditioning film and stick to it. The bacterial cells become surrounded by a protective material that they release, which is sticky and helps attach them to each other and to the solid surface. The extracellular matrix of a biofilm protects the bacteria from attack by the host’s immune system. Biofilms and Infections

Carnicom Institute - CDB - Growth Progressions This paper will outline specific, identifiable and repeatable growth stages of the cross-domain bacteria (CDB) and its associated forms. It will be seen that a wide variety of growth forms will ultimately emerge from what appears to be a simple, non-descript spherical living entity; as such the term 'pleomorphic' is fully justified in this presentation. This is the case even when the study is restricted to the most primitive form of existence (i.e., the CDB) and this sets the stage to for us anticipate a high level of survivability and adaptibility for the organism. The outline of presentation is based primarily upon chronology. This image above represents the basis of all subsequent work here. The above image is a clear and unhindered presentation of the CDB as they have been isolated. The photograph above is an important one and it has been difficult to capture. What are the known methods of reproduction? Two types of cells exist : prokaryotic and eukaryotic.

Cell migration Cell migration is a central process in the development and maintenance of multicellular organisms. Tissue formation during embryonic development, wound healing and immune responses all require the orchestrated movement of cells in particular directions to specific locations. Errors during this process have serious consequences, including intellectual disability, vascular disease, tumor formation and metastasis. An understanding of the mechanism by which cells migrate may lead to the development of novel therapeutic strategies for controlling, for example, invasive tumour cells. Cells often migrate in response to specific external signals, including chemical signals and mechanical signals. Cell migration studies[edit] The migration of cultured cells attached to a surface is commonly studied using microscopy. Common features[edit] The processes underlying mammalian cell migration are believed to be consistent with those of (non-spermatozooic) locomotion.[3] Observations in common include:

Nosocomial infection A hospital-acquired infection, also known as a HAI or in medical literature as a nosocomial infection, is an infection whose development is favored by a hospital environment, such as one acquired by a patient during a hospital visit or one developing among hospital staff. Such infections include fungal and bacterial infections and are aggravated by the reduced resistance of individual patients.[1][dead link] In the United States, the Centers for Disease Control and Prevention estimated roughly 1.7 million hospital-associated infections, from all types of microorganisms, including bacteria, combined, cause or contribute to 99,000 deaths each year.[2] In Europe, where hospital surveys have been conducted, the category of Gram-negative infections are estimated to account for two-thirds of the 25,000 deaths each year. Nosocomial infections can cause severe pneumonia and infections of the urinary tract, bloodstream and other parts of the body. Types[edit] Cause[edit] Transmission[edit]

Biofilms and Infection | ENT Kent © 2007 – 2015 JW Fairley Content last updated 18 August 2014 Disclaimer All information and advice on this website is of a general nature and may not apply to you. Complexity of biofilm. © 2003 Center for Biofilm Engineering Montana State University-Bozeman What is a biofilm? A biofilm is a community of micro-organisms, attached to a wet or moist surface. Individual micro-organisms can only be seen under a microscope. Two marvels of biological structural engineering in niche environments. Micro-organisms attach themselves to all kinds of surfaces. The plaque that builds up between the gum and the tooth is a biofilm. Biofilms also build up in humans. Biofilms start as just a few bugs forming a thin layer. Five stages of biofilm development. Graphic by Peg Dirckx and David Davies &copy 2003 Center for Biofilm Engineering Montana State University. A bug’s life Bugs, germs, bacteria, micro-organisms – we think of them as dirty and dangerous, to be avoided, controlled, exterminated. Disclaimer

Carnicom Institute - Morgellons : The Breaking of Bonds and the Reduction of Iron Three methods that appear to interfere with the molecular bonding of the iron-dipeptide complex that is now understood to be characteristic of the "Morgellons" growth structure have been established and identified. The iron-protein complex is believed to be of, or similar to, the "Rieske Protein" (iron-sulfur) form. These three methods also appear to be variably successful in reducing the oxidation state of the encapsulated iron from the Fe(III) state to the Fe(II) state. The discovered methods involve the use of ascorbic acid (Vitamin C), N-acetyl cysteine (NAC) and glutathione. The results of applying glutathione appear to be especially promising at this time, as it appears that a major disruption in the bond structure has taken place after approximately 72 hours. This result has been a primary target of research through this past year, and it may represent an important potential inhibitor to the structure growth. Listen to a Research Discussion on This Topic Additional Discussion:

Vector space Vector addition and scalar multiplication: a vector v (blue) is added to another vector w (red, upper illustration). Below, w is stretched by a factor of 2, yielding the sum v + 2w. An example of a vector space is that of Euclidean vectors, which may be used to represent physical quantities such as forces: any two forces (of the same type) can be added to yield a third, and the multiplication of a force vector by a real multiplier is another force vector. In the same vein, but in a more geometric sense, vectors representing displacements in the plane or in three-dimensional space also form vector spaces. Vectors in vector spaces do not necessarily have to be arrow-like objects as they appear in the mentioned examples: vectors are best thought of as abstract mathematical objects with particular properties, which in some cases can be visualized as arrows. Introduction and definition[edit] The concept of vector space will first be explained by describing two particular examples: and

MRSA Biofilms - MRSA Medical MRSA Infection CAMRSA Staphylococcus aureus - Biofilms... Enterococcus faecalis, Staphylococcus aureus, Staphylococcus epidermidis in Biofilm Formations... Prior to 1984, enterococci were members of the genus Streptococcus: thus Enterococcus faecalis was known as Streptococcus faecalis. A characteristic of many pathogenic strains of Staphylococcus epidermidis is the production of a slime resulting in biofilm formation. MRSA resistant bacterium are often found in biofilm formations - Biofilms are 'protective coatings' which attract various strains of the staph bacterium to form a matrix-type of formation that protect the inner core and prevent antibiotic influence. The formation of bacterial biofilms on implant material is widely accepted as the leading cause of the local progressive tissue destruction resulting in osteolysis and implant loosening. It is generally assumed that the infection persists because bacterium organised as biofilms escape the host defence mechanisms.

Coping with chronic, rare, and invisible diseases and disorders - DYING, SURVIVING, AND AGING WITH GRACE • Helpful websites and other resources • Managing pain • Rare and undiagnosed diseases • Memoirs of coping with chronic, rare, or invisible diseases or special health problems • Coping with invisible chronic illnesses Helpful websites and other resources Because I write about illness and medical research and the professionals who try to help those with medical problems, I find myself wanting to recommend links that don't really fit into the other categories on this site, or even into the concept of the site. What are invisible illnesses? Rare and undiagnosed diseases • National Organization for Rare Disorders (NORD). [Back to Top] Accord Alliance Promotes comprehensive and integrated approaches to care that enhance the health and well-being of people and families affected by disorders of sex development (DSD, which includes some conditions referred to as "intersex") After Surgery to Slim Down, the Bills Can Pile Up (Lesley Alderman, NYTimes, 12-31-10). Arthritis Autoimmune diseases [Go Top]