Putting Reflections back into the spotlight. Once renowned as the creator of Driver, Reflections subsequently faded from prominence, handing the limelight to its sibling Ubisoft studios. 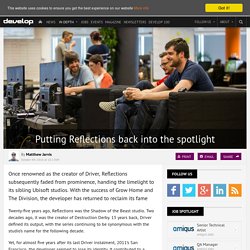 With the success of Grow Home and The Division, the developer has returned to reclaim its fame Twenty-five years ago, Reflections was the Shadow of the Beast studio. Two decades ago, it was the creator of Destruction Derby. 15 years back, Driver defined its output, with the series continuing to be synonymous with the studio’s name for the following decade. Yet, for almost five years after its last Driver instalment, 2011’s San Francisco, the developer seemed to lose its identity. It contributed to a kaleidoscopic selection of parent publisher Ubisoft’s biggest releases – Just Dance, Far Cry and Watch Dogs – but only ever in a supporting role. Then, in 2015, Grow Home arrived. “We are at a tipping point in the history of Reflections,” observes Pauline Jacquey (pictured), who took charge as MD in early 2013. I’m not looking for scale here. Sponsored: 3 ways Ubisoft Toronto builds a strong studio culture. 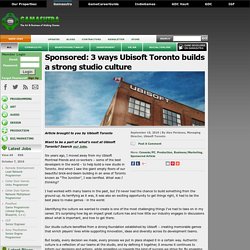 Search our jobs. Six years ago, I moved away from my Ubisoft Montreal friends and co-workers – some of the best developers in the world – to help build a new studio in Toronto. IGN SEA - A Moment With Ubisoft Philippines Studio's Chip Go. Back in May, Ubisoft announced that it was opening a production studio in thePhilippines during the second quarter of 2016. 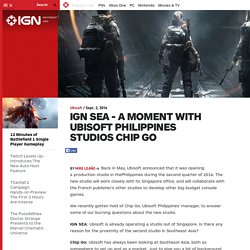 The new studio will work closely with its Singapore office, and will collaborate with the French publisher's other studios to develop other big-budget console games. We recently gotten hold of Chip Go, Ubisoft Philippines' manager, to answer some of our burning questions about the new studio. IGN SEA: Ubisoft is already operating a studio out of Singapore. Is there any reason for the proximity of the second studio in Southeast Asia? Chip Go: Ubisoft has always been looking at Southeast Asia, both as somewhere to set up and as a market. They quite literally don't make games the way they used to. Spend any time with your grandparents and at some stage the age-old phase “they don’t make them like they use to” will pop up as nostalgia gets the better of them. 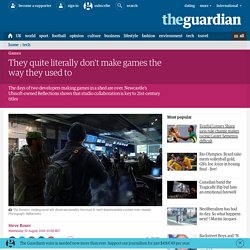 Usually it’s just the rose-tinted glasses talking, but for video games it’s a fact: they quite literally don’t make them like they used to. Back in the 1980s, when the industry was in its infancy, games were often created by two-person teams consisting of one programmer and one artist. In the 1990s, sprites gave way to 3D modelling, and development teams mushroomed in size, hoovering up specialists in disciplines across animation, level design, character modelling and artificial intelligence. Today, creating the most advanced, triple-A games has become too big a task for a single developer leading to the rise of what is best described as a modular approach, where different developers work on different parts of a single game.

Old dog, new tricks One developer that is pioneering the modern modular approach is no spring chicken. The Division isn't just Ubisoft's next game, it's the company's future. This week doesn't mark just the launch of Ubisoft's latest new franchise with the release of Tom Clancy's The Division, the leadership at Ubisoft tell us. 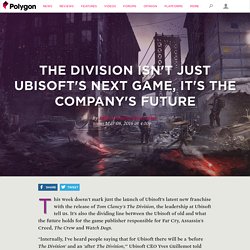 Ubisoft is GREAT – A blog about games. With my last blog post concerning my opinions on what is AAA game production I talked with a lot of my friends, coworkers, ex-coworkers and people around the Internet about the impact on these kind of posts and other things. 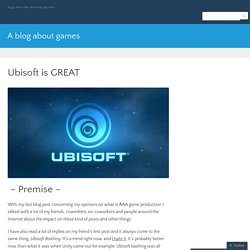 I have also read a lot of replies on my friend’s first post and it always come to the same thing, Ubisoft Bashing. It’s a trend right now, and I hate it. It’s probably better now than what it was when Unity came out for example. Ubisoft bashing was all over the place like it was the only bad thing that ever happened in the industry. That was pissing me off at the time and even now, I’m not even at Ubisoft anymore and that pisses me off. 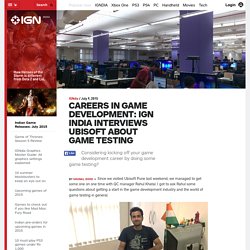 I got to ask Rahul some questions about getting a start in the game development industry and the world of game testing in general. For the sake of those who don't know what QA testing is, what does it usually entail? How Ubisoft Shanghai went from porting games to pretty damn awesome in less than a decade. Mary-Anne Lee | February 10, 2014 Corinne Le Roy had just come back from the south of Russia when Ubisoft CEO Yves Guillemot asked if she wanted to go to China. 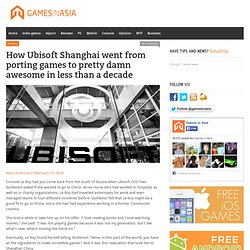 An ex-nurse who had worked in hospitals as well as in charity organizations, Le Roy had travelled extensively for work and even managed teams in four different countries before. Guillemot felt that Le Roy might be a good fit to go to China, since she had had experience working in a former Communist country. She took a while to take him up on his offer. “I love reading books and I love watching movies,” she said. Meet the editors pushing Ubisoft to be better than Nintendo, Rockstar, Valve and Blizzard. Serge Hascoet joined Ubisoft in 1987 as a designer and tester of sorts, working on Iron Lord and Skateball for the home computers of the day. 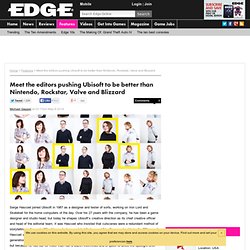 Over his 27 years with the company, he has been a game designer and studio head, but today he shapes Ubisoft’s creative direction as its chief creative officer and head of the editorial team. It was Hascoet who insisted that cutscenes were a redundant method of storytelling in the early ’00s, Hascoet who mandated that every Ubisoft game should aim for 60fps, and Hascoet who is driving the company towards open worlds and systemic games as it transitions to a new generation of hardware. His contribution to games is immeasurable – not simply because of its enormity, but because he has sat for fewer than half-a-dozen interviews and is quick to direct the spotlight onto anyone else.

He refuses to be photographed individually, and is only prepared to go on record for the sake of his staff. How Rayman Legends Is Made!