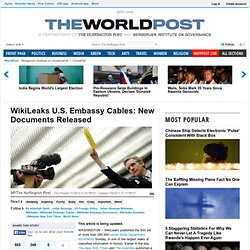 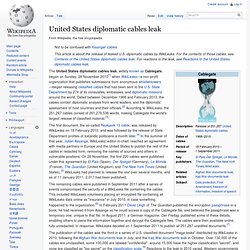 State Department by 274 of its consulates, embassies, and diplomatic missions around the world. Dated between December 1966 and February 2010, the cables contain diplomatic analysis from world leaders, and the diplomats' assessment of host countries and their officials.[2] According to WikiLeaks, the 251,287 cables consist of 261,276,536 words, making Cablegate the world's largest release of classified material.[3] The publication of the cables was the third in a series of U.S. classified document "mega-leaks" distributed by WikiLeaks in 2010, following the Afghan War documents leak in July, and the Iraq War documents leak in October. 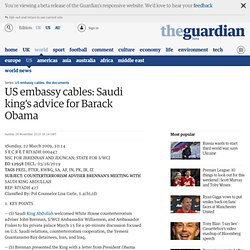 Saudi-relations, counterterrorism cooperation, the Yemeni Guantanamo Bay detainees, Iran, and Iraq. -- (S) Brennan presented the King with a letter from President Obama expressing a personal message of friendship, appreciation for our close and collaborative relationship and concern over the disposition of Yemeni detainees at Guantanamo. 2. (S) PLEDGES OF FRIENDSHIP: Brennan asserted that the U.S. 3. 4. 5. US embassy cables: The job of the media is not to protect the powerful from embarrassment. Is it justified? 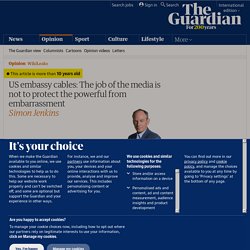 Should a newspaper disclose virtually all a nation's secret diplomatic communication, illegally downloaded by one of its citizens? The reporting in the Guardian of the first of a selection of 250,000 US state department cables marks a recasting of modern diplomacy. Clearly, there is no longer such a thing as a safe electronic archive, whatever computing's snake-oil salesmen claim. No organisation can treat digitised communication as confidential. An electronic secret is a contradiction in terms. Anything said or done in the name of a democracy is, prima facie, of public interest. In this light, two backup checks were applied. The state department knew of the leak several months ago and had ample time to alert staff in sensitive locations.

The US Diplomatic Leaks: A Superpower's View of the World - SPIEGEL ONLINE - News - International. What does the United States really think of German Chancellor Angela Merkel? 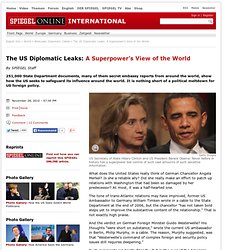 Is she a reliable ally? Did she really make an effort to patch up relations with Washington that had been so damaged by her predecessor? At most, it was a half-hearted one. The tone of trans-Atlantic relations may have improved, former US Ambassador to Germany William Timken wrote in a cable to the State Department at the end of 2006, but the chancellor "has not taken bold steps yet to improve the substantive content of the relationship.

" That is not exactly high praise. And the verdict on German Foreign Minister Guido Westerwelle? Such comments are hardly friendly. Secretary of State Hillary Clinton's emissaries also learn of a special "Iran observer" in the Azerbaijani capital of Baku who reports on a dispute that played out during a meeting of Iran's Supreme National Security Council. A Political Meltdown. Library of Congress Blocks Access To Wikileaks.