EMVs - DESIGNERS OF SOLAR SYSTEMS: 1999 interview with Dr. Norman Bergrun author of "Ringmakers of Saturn" Is an alumnus of Ames Research Laboratory, NACA (National Advisory Committee for Aeronautics) predecessor of Ames Research Center, NASA where he worked twelve years as a research scientist. 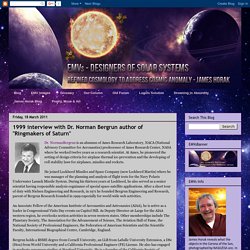 At Ames, he pioneered the setting of design criteria for airplane thermal ice-prevention and the developing of roll stability laws for airplanes, missiles and rockets. He joined Lockheed Missiles and Space Company (now Lockheed Martin) where he was manager of the planning and analysis of flight tests for the Navy Polaris Underwater Launch Missile System. During his thirteen years at Lockheed, he also served as a senior scientist having responsible analysis cognizance of special space-satellite applications. After a short tour of duty with Nielsen Engineering and Research, in 1971 he founded Bergrun Engineering and Research, parent of Bergrun Research founded in 1999 especially for world wide web activities. 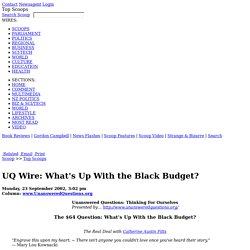 The Real Deal with Catherine Austin Fitts "Engrave this upon my heart: ~ There isn't anyone you couldn't love once you've heard their story. " --- Mary Lou Kownacki"What is relevant is what solves the problem. If we had thought through real relevancies, we would be on Sirius by now. " ---- Peter Medewar It is time to deal with the 64 dollar question --- the biggest crazy aunt in the living room. The questions that need to be raised in any effort to find the truth about a significant event related to power and money in the US --- and answered if we are to ever find the truth of how our world works --- are: I do not know the answer to these questions. When dealing with challenging uncertainty, I find that many researchers simply delete the existence of such uncertainty from their reality. 1. 2. 3.

SCENARIO #1. . % PROBABILITY SCENARIO #1 IS TRUE ______ (You fill in) 3. Le Metropole Cafe. Jaw-Dropping Crimes of the Big Banks. Preface: Not all banks are criminal enterprises. 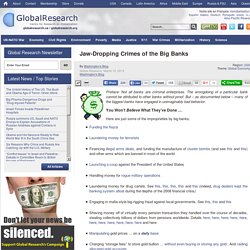 The wrongdoing of a particular bank cannot be attributed to other banks without proof. But – as documented below – many of the biggest banks have engaged in unimaginably bad behavior. You Won’t Believe What They’ve Done … Here are just some of the improprieties by big banks: Funding the NazisLaundering money for terroristsFinancing illegal arms deals, and funding the manufacture of cluster bombs (and see this and this) and other arms which are banned in most of the worldLaunching a coup against the President of the United StatesHandling money for rogue military operationsLaundering money for drug cartels.

Image by William Banzai. In an age of 'realists' and vigilantes, there is cause for optimism. The Secret Sun: Unified Weird Theory: An Introduction. Hey, you wanted weird... 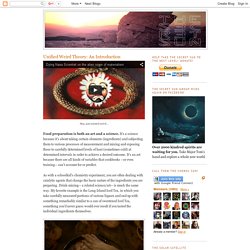 Food preparation is both an art and a science. It's a science because it's about taking certain elements (ingredients) and subjecting them to various processes of measurement and mixing and exposing these to carefully determined levels of heat (sometimes cold) at determined intervals in order to achieve a desired outcome. It's an art because there are all kinds of variables that cookbooks --or even training-- can't account for or predict. As with a schoolkid's chemistry experiment, you are often dealing with catalytic agents that change the basic nature of the ingredients you are preparing. Drink-mixing-- a related science/art-- is much the same way. With cooking it's also important to choose the right ingredients in the best available quality. I find it's best to prepare several different types of cuisine. But for me, that's not only a waste of energy, it's also extremely short-sighted and self-limiting. Let me retrace my steps here...

I barely cracked it. A New Paradigm: The Growing Rejection of Psi Skepticism. This has been a heck of a year in terms of psi and controversy. 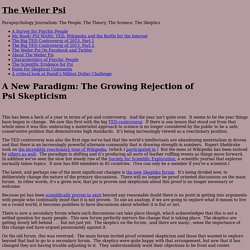 And the year isn’t quite over. It seems to be the year things have begun to change. We saw this first with the big TED controversy. If there is one lesson that stood out from that whole mess it was this: embracing a materialist approach to science is no longer considered by the public to be a safe, conservative position that demonstrates high standards. It’s being increasingly viewed as a reactionary position. The TED controversy was also the first sign we’ve had that the world’s intellectuals are abandoning materialism in droves and that there is an increasingly powerful alternate community that is drawing strength in numbers. The latest, and perhaps one of the most significant changes is the new Skeptiko forum. Because psi has been scientifically proven to exist beyond any reasonable doubt there is no point in getting into arguments with people who continually insist that it is not proven.