What you need to know in Finance / raising money

Financial planning for startups. Over lunch last week, I asked a Redpoint entrepreneur, who had recently sold his company, how his board could have been more helpful to him. 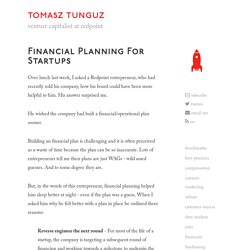 His answer surprised me. He wished the company had built a financial/operational plan sooner. Building an financial plan is challenging and it is often perceived as a waste of time because the plan can be so inaccurate. Lots of entrepreneurs tell me their plans are just WAGs - wild assed guesses. And to some degree they are. But, in the words of this entrepreneur, financial planning helped him sleep better at night - even if the plan was a guess. The importance of optionality - StartupCFO. It seems like there is no end to the supply of venture capital these days. 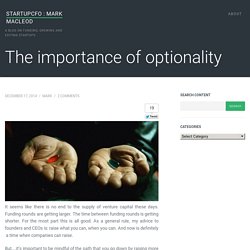 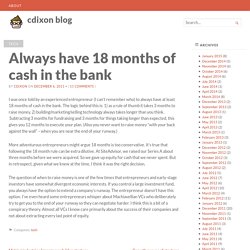 The logic behind this is: 1) as a rule of thumb it takes 3 months to raise money, 2) building/marketing/selling technology always takes longer than you think. Subtracting 3 months for fundraising and 3 months for things taking longer than expected, this gives you 12 months to execute your plan. Why investor updates are really, really important. Why investor updates are really, really important I’ve spent 20 years as a founder, and during 10 of those years I had investors. 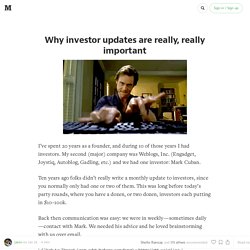 My second (major) company was Weblogs, Inc. (Engadget, Joystiq, Autoblog, Gadling, etc.) and we had one investor: Mark Cuban. Ten years ago folks didn’t really write a monthly update to investors, since you normally only had one or two of them. This was long before today’s party rounds, where you have a dozen, or two dozen, investors each putting in $10–100k. Back then communication was easy: we were in weekly — sometimes daily — contact with Mark. . [ Click to Tweet (can edit before sending) : ]

How to Raise Money. September 2013 Most startups that raise money do it more than once. 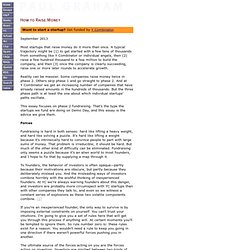 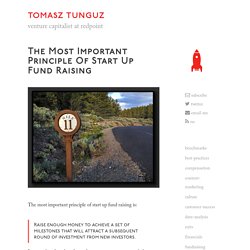 The Top Ten Fundraising Fails. Fundraising isn’t easy, even if done well, its fraught with all sorts of ambiguity and frustrations. 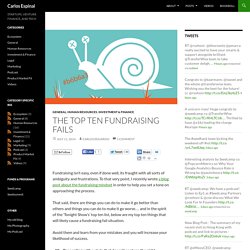 To that very point, I recently wrote a blog post about the fundraising mindset in order to help you set a tone on approaching the process. That said, there are things you can do to make it go better than others and things you can do to make it go worse… and in the spirit of the ‘Tonight Show’s’ top ten list, below are my top ten things that will likely cause a fundraising fail situation. Avoid them and learn from your mistakes and you will increase your likelihood of success. How to Present and Answer Questions in a Team Presentation or VC Pitch. I sit through a lot of presentations. 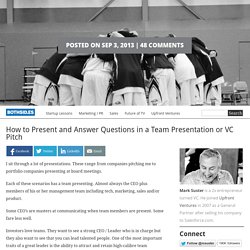 These range from companies pitching me to portfolio companies presenting at board meetings. Each of these scenarios has a team presenting. Almost always the CEO plus members of his or her management team including tech, marketing, sales and/or product. Some CEO’s are masters at communicating when team members are present. Numbers Can Ruin A Good Story. As I was reading Josh Kopelman‘s excellent post on the seed boom and Series A bust, I got thinking of some words of wisdom Mike Arrington once shared with me. 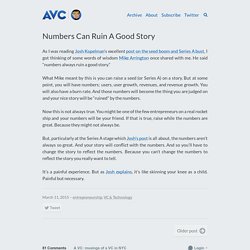 He said “numbers always ruin a good story.” What Mike meant by this is you can raise a seed (or Series A) on a story. But at some point, you will have numbers; users, user growth, revenues, and revenue growth. Breaking Down a Typical VC/Startup Diligence Process. Seven Surprises About Convertible Notes That Founders Should Know. James Geshwiler1/12/15 Over the past two years, there has been an explosion of the use of convertible notes for seed rounds. 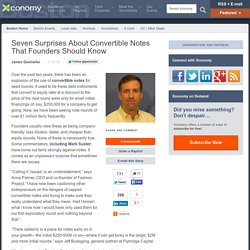 It used to be these debt instruments that convert to equity later at a discount to the price of the next round were only for small initial financings of, say, $250,000 for a company to get going. Now, we have been seeing note rounds of over $1 million fairly frequently. Founders usually view these as being company-friendly: less dilution, faster, and cheaper than equity rounds. Startups: Go fast, but pitch slow. Techstars program mantra is DO MORE FASTER. Coined by Brad Feld and David Cohen in the earlier days, the saying reminds founders that they are on the clock, and have the opportunity to get years worth of work done in just 3 months. But when it comes to demo day, the culmination of the program, the advice is the opposite. Instead of going fast, we tell the CEOs to go slow and to say less.

Revenue Multiples And Growth. When you say “the stock is trading at 20x revenues” people rightly shake their head and say “that is nuts.” I got a lot of tweets like that in reaction to my comments about the Uber valuation in the LeWeb breakfast chat. However, what people fail to realize is these things happen in a moment in time and that stocks won’t trade at 20x revenues forever. Let’s take a fictional company that has $1bn in revenues in 2014 and goes public at $20bn, 20x revenues. Let’s say it will double revenues in 2015, then grow 60% in 2016, and 40% in 2017, and 30% in 2018. So here are the revenue numbers So, let’s now look at profits, since valuations are ultimately a function of profits, not revenues.

Pricing A Follow-On Venture Investment. Today on MBA Mondays, I am going to walk you through some math that our team does when looking at a venture investment in a company that is starting to scale its business. Let's assume we have a portfolio company. I will call it fit.sy. Determining Valuation Multiples. Last week on MBA Mondays, I talked about valuing an internet marketplace business. How to make a cap table. Summary: A cap table lists who owns what in a startup. It calculates how the option pool shuffle and seed debt lower the Series A share price. Ten Realities of Taking Venture Capital Money. If you take venture capital money... Entrepreneurs Have Control When Things Work, VCs Have Control When They Don't. On startups burn rates. Bill Gurley gave an interview a few weeks ago in the WSJ where he sounded alarm on the very high cash burn rates of big startups these days.

This is How Startups “Level Up” After Raising Money. Burn Rates: How Much? In the comments to last week's Burn Rate post, I was asked to share some burn rates from our portfolio. Ten Good Reasons to Take Venture Capital Money.