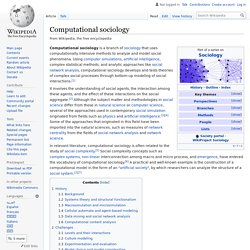 Using computer simulations, artificial intelligence, complex statistical methods, and analytic approaches like social network analysis, computational sociology develops and tests theories of complex social processes through bottom-up modeling of social interactions.[1] In relevant literature, computational sociology is often related to the study of social complexity.[5] Social complexity concepts such as complex systems, non-linear interconnection among macro and micro process, and emergence, have entered the vocabulary of computational sociology.[6] A practical and well-known example is the construction of a computational model in the form of an "artificial society", by which researchers can analyze the structure of a social system.[2][7] History[edit] Background[edit] Agent-based models have had a historical influence on Computational Sociology.

Impact[edit] Methamphetamine Markets, Personal Relationships, and Families. Image: Victor Habbick It is not legal to market methamphetamine in America. 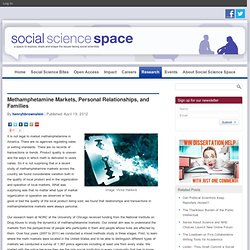 There are no agencies regulating sales or setting standards. There are no records of transactions or trends. Product quality is uneven and the ways in which meth is delivered to users varies. So it is not surprising that in a recent study of methamphetamine markets across the country we found considerable variation both in the quality of local product and in the organization and operation of local markets. Our research team at NORC at the University of Chicago received funding from the National Institute on Drug Abuse to study the dynamics of methamphetamine markets. Markets for different drugs are organized and operate in different ways. What’s wrong with the Big Society? by John Brewer. Sociology and the riots by Mark Doidge. Riots, respect and research by Abby Day.

Riot sanctions by Howard Wollman. Letters: Sociologists' offer to unravel the riots. One of the first things that disappears when considering disturbances such as these is perspective. 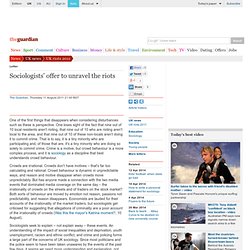 One loses sight of the fact that nine out of 10 local residents aren't rioting, that nine out of 10 who are rioting aren't local to the area, and that nine out of 10 of these non-locals aren't doing it to commit crime. That is to say, it is a tiny minority who are participating and, of those that are, it's a tiny minority who are doing so solely to commit crime. Crime is a motive, but crowd behaviour is a more complex process, and it is sociology as a discipline that best understands crowd behaviour. Crowds are irrational. Crowds don't have motives – that's far too calculating and rational. Sociologists seek to explain – not explain away – these events. Professor John Brewer President, BSA. American Sociological Review. Why Russians think Americans don't own their homes. University of Arizona sociologist Jane Zavisca says the two countries are polar opposites when it comes to mortgage financing. 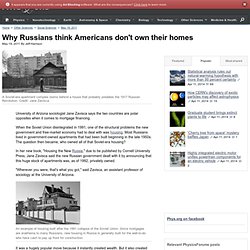 When the Soviet Union disintegrated in 1991, one of the structural problems the new government and free-market economy had to deal with was housing. Most Russians lived in government-owned apartments that had been built beginning in the late 1950s. The question then became, who owned all of that Soviet-era housing? The “Reverse Discrimination Sentiment” - Innovations. As Peter Schmidt reported in The Chronicle, new research to be presented at the American Educational Research Association next week finds that Americans “see minority students as having much greater advantages in seeking access to college than is actually the case.” 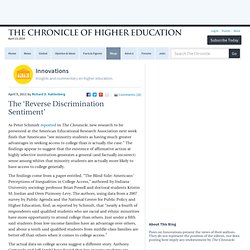 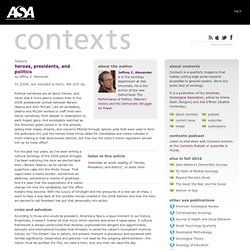 Alexander In 2008, we needed a hero. We still do. Political narratives are all about heroes, and never was it more plainly evident than in the 2008 presidential contest between Barack Obama and John McCain. Like all candidates, Obama and McCain worked to craft their own heroic narratives, from despair to redemption to, each hoped, glory. Listen to this article Download an audio reading of “Heroes, Presidents, and Politics”, or listen here: For the past two years, as I’ve been writing a cultural sociology of the 2008 power struggle, I’ve been watching the hero we elected back then—Barack Obama—as he carried his superhero cape into the White House. Crisis and Salvation According to those who would be president, Americans face a unique moment in our history.

The threatening crisis is not just a matter of survival but transcendence. Factoidz. Secretly forced brain implants Pt IV: Intel expert on the doctors, children, military research - National Human Rights. Human Right to Private Life - The right to privacy is the right to individual autonomy that is violated when states interfere with, penalise or prohibit actions which essentially only concern the individual. 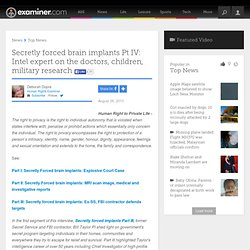 The right to privacy encompasses the right to protection of a person’s intimacy, identity, name, gender, honour, dignity, appearance, feelings and sexual orientation and extends to the home, the family and correspondence. See: AnooX - Social Networking based Search engine & News.