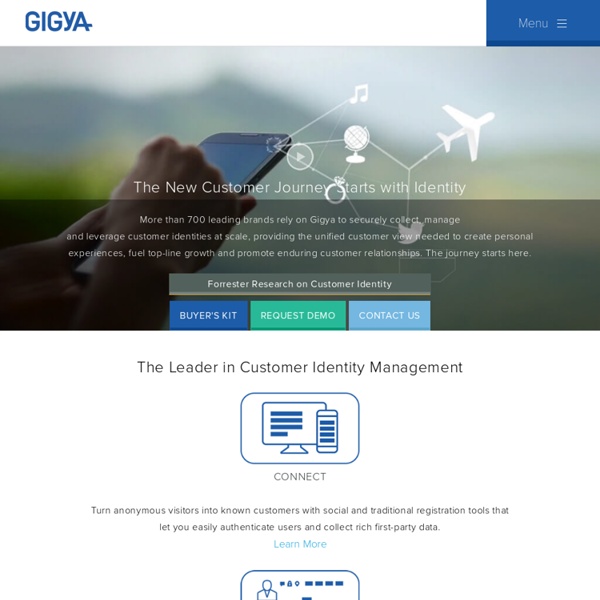 The tools you need to connect with consumers, harness rich data, and make marketing relevant. Establish authentic relationships with your users with technologies such as Social Login and Registration-as-a-Service that allow your users to leverage their real identities on your brand’s websites and applications.Learn More Collect and normalize permission-based identity and behavior data with products like Identity Storage to gain an unparalleled understanding of your users, while ensuring you comply with social network and data storage policies.Learn More Turn your visitors into loyal users by offering them a completely social on-site experience with Social Plugins and Gamification and by personalizing your marketing campaigns through the NEXUS Partner Ecosystem.Learn More Resources for Connected Consumer Management Webinar: Increase Sales with Google Wallet

10 Chat Widgets to Consider Embedded chat in a website provides the ability to more closely connect with your readers or customers, depending on the instance. Chat widgets provide real-time feedback and spur thought-provoking discussions - features lacking in e-mail. However the disadvantages should be acknowledged too. In some cases, widgets may slow down the page load or take away from the overall site experience rather than enhance it. However I encourage everyone to give some of the following chat widgets a try and make your own conclusions. Let's take a look at some of the top ones... Help Haiti Now Webcast Featuring Major Celebs Airs Friday Night Hoping to raise money for the Haiti earthquake relief effort, Bono, Jay-Z, Justin Timberlake, Bruce Springsteen, Taylor Swift, Alicia Keys, and Coldplay and somewhere around 100 other stars will entertain viewers on both the web and traditional TV tomorrow night at 8 p.m. ET in a benefit called Hope For Haiti Now: A Global Benefit for Earthquake Relief. The telethon was organized by MTV Networks and George Clooney, and other networks taking part will include the websites of MySpace, YouTube, Hulu, AOL, Fancast, VH1, CBS, MSN, Bing, Yahoo, Rhapsody, TV.com, BET and CNN. The event will be streamed by mobile providers AT&T, Verizon and Sprint, too. There will be more than 30 networks involved once all's said and done.

Subway Map Visualization jQuery Plugin » TechBubble I have always been fascinated by the visual clarity of the London Underground map. Given the number of cities that have adopted this mapping approach for their own subway systems, clearly this is a popular opinion. At a conference some years back, I saw a poster for the Yahoo! Developer Services. How Social Commerce Works: The Social Psychology of Social Shopping As a social psychologist, I’m interested in how social commerce works. Not for academic reasons, but for a purely practical reason. Understanding why it makes commercial sense to help people to connect where they buy and buy where they connect provides businesses with a strategic advantage; the opportunity to reap the rewards of a powerful insight-led social commerce strategy, as opposed to merely deploying social commerce as a set of tactical tools. Jumping to the conclusion of a rather long post, I think that a psychologically informed understanding of how social commerce works points to the possibility of six particularly effective social commerce strategies. But first the obvious.

Business group chat, file sharing, group decision making: Campfire Current Campfire customers can sign in here. Hello, We launched Campfire back in 2006 so teams could easily collaborate online in real-time. Hope For Haiti Jay-Z, Justin Timberlake, Bono To Headline MTV's Justin Timberlake, Coldplay, Alicia Keys, Bruce Springsteen, Wyclef Jean, Bono, The Edge and Jay-Z will lead the all-star lineup of performers for Friday night's "Hope for Haiti Now: A Global Benefit for Earthquake Relief" telethon. More than 100 stars have signed on to help raise funds for the MTV Networks-sponsored show, which will benefit the victims of last week's devastating 7.0-magnitude earthquake on the impoverished island. Several one-of-a-kind collaborations will highlight the event, including a hookup between U2's Bono and The Edge with Jay-Z and Rihanna in London and a jam featuring Kid Rock, Keith Urban and Sheryl Crow in Los Angeles; like all the night's performances, the collabos will be available for download on iTunes for 99 cents the next day. Also appearing in New York with Wyclef and Springsteen will be Jennifer Hudson, Mary J. All donations will directly benefit Oxfam America, Partners in Health, Red Cross, UNICEF and Wyclef's Yele Haiti Foundation.

Timeless Persuasion Principles for Uncertain Times - by Tim Ash Dr. Robert Cialdini is an internationally renowned persuasion expert and President of Influence At Work. He has researched persuasion techniques partially by putting himself through a wide variety of training and indoctrination environments where convincing others was paramount. He has also conducted formal university research studies to refine his findings. His books have sold in the millions of copies over an extended period of time. He is simply the world’s highest authority on persuasion and influence. Download Battlegram X for Mac - Chat client for Battle.net Chat client for Battle.net. Free Battlegram is a client that connects to the public chat interface ("Chat") of Blizzard Entertainment's Battle.net Internet gaming service. It enables Mac users of Battle.net to communicate with other Battle.net users without having to use one of Blizzard's game clients.

Press Releases Blackbaud Supports NetHope in its Efforts to Restore Communications in HaitiDonation will provide 20 humanitarian organizations working in Haiti with critical IT resources Charleston, S.C. (January 21, 2010) – Blackbaud, Inc., (Nasdaq: BLKB) today announced that it is making a $50,000 donation in support of NetHope, an information technology collaboration of 28 leading international humanitarian organizations, which is working to restore communications infrastructure in Haiti. When an emergency hits, NetHope reaches out to its members, including organizations like Heifer International, Plan International and Save the Children, and coordinates relief efforts—particularly when telecommunications infrastructure is damaged. Blackbaud is making the donation in the context of a larger partnership in support of NetHope’s mission to provide communication technology and practices to serve people in the developing world.

10 Web Apps To Build The Next Big Thing Without Writing Any Code Ever wished that someone would overlay some data that fascinates you on a Google Map? Ever have an idea for a new desktop widget to take the computing world by storm? Well, no matter what your skill level is, there are tools out there in the world that will help you realize your dreams just by dragging-and-dropping what you need and in the order you want it. Take a look through these ten solutions — which range from common, everyday type of Google Maps mashups to heavy-hitting, enterprise-level applications — and be amazed at how very little work can bring big results. DevHub: A point-and-click solution for developing a site, with monetization in place from the day you open it up. The themes are customizable, so your site needn’t be immediately recognizable as being from DevHub; there is some branding indicating that your site is a DevHub site, but it is pretty unobtrusive.

Shwowp Launches In Limited Beta, Invites You To Join TechCrunch Disrupt finalist Shwowp announces today that it is opening up its social purchase sharing platform to its 2000-strong waiting list plus extending an invite to the first 500 TechCrunch readers to sign up here. Founded by Whuffie Factor author Tara Hunt, Cassandra Girard and Jerome Paradis, the Montreal-based Shwowp organizes consumer data in order to help vendors better target discounts and promotions and help consumers control their purchase information, which up to this point has only existed in silos. Beta users can now forward all receipts and order confirmations to wow@shwowp.com as well as directly upload them. Shwowp will then aggregate the information, allowing you to add photos, comments, track trends and share your shopping history with friends through Twitter, Facebook and email. Hunt says Shwowp’s future plans include adding about 50 stores per week to its database and opening the service up to all users in November.

Aftershock Hazards in Haiti RESTON, Va.—The aftershock sequence of the magnitude-7 earthquake that struck near Port-au-Prince, Haiti, on Jan. 12, 2010, will continue for months, if not years. The frequency of events will diminish with time, but damaging earthquakes will remain a threat. U.S. Geological Survey Director Marcia McNutt asked a team of USGS earthquake scientists to provide an evaluation of the earthquakes facing Haiti now and in the future. Here is the statement in its entirety from the U.S. Free Websites Performance, Availability, Traffic Monitoring Here's what our monitoring tools can do for IT Consultants, ISPs, ISVs, Web Developers and Web Designers Imagine how much you could grow your business if you weren't chained to your desk. Monitor.Us makes this possible.