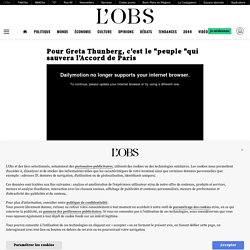 10 déc. 2020 In Must-Watch Video, Greta Thunberg Warns Humanity 'Still Speeding in Wrong Direction' on Climate. Teen climate leader Greta Thunberg on Thursday reiterated her demand that humanity end its inaction on the planetary emergency as she warned—five years after the Paris agreement was signed—the world is "speeding in the wrong direction" in terms of emission reductions. 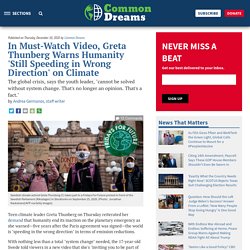 With nothing less than a total "system change" needed, the 17-year-old Swede told viewers in a new video that she's "inviting you to be part of the solution. " Thunberg shared the 3-minute video on Twitter Thursday—two days before the Paris climate agreement's five-year anniversary. While "a lot has happened" since the accord was finalized December 12, 2015 to limit global warming to well below 2 degrees Celsius and pursue a goal of a 1.5 degrees Celsius temperature threshold, "the action needed is still nowhere in sight," said Thunberg. In fact, she warned, "We are still speeding in the wrong direction. " 9 déc. 2020 « Nos dirigeants ont ruiné mon enfance et mon futur » : ces jeunes activistes qui bousculent les consciences. Elles ont respectivement 9 ans, 15 ans et 24 ans. 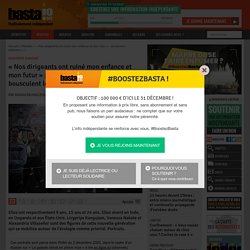 13 nov. 2020 Post-election, youth climate activists celebrate, recuperate, and organize. Now that President-elect Joe Biden has won the White House, Claire Hedberg is ready to finally get back to her chemistry homework. 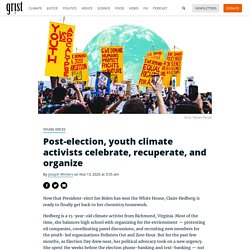 Hedberg is a 15-year-old climate activist from Richmond, Virginia. Most of the time, she balances high school with organizing for the environment — protesting oil companies, coordinating panel discussions, and recruiting new members for the youth-led organizations Polluters Out and Zero Hour. But for the past few months, as Election Day drew near, her political advocacy took on a new urgency. She spent the weeks before the election phone-banking and text-banking — not only for the Biden campaign, but for down-ballot races in Virginia, including progressive candidates for Congress, mayor, and the local school board. “I gave up my whole October for this,” Hedberg said, describing the chaotic lead-up to November 3. 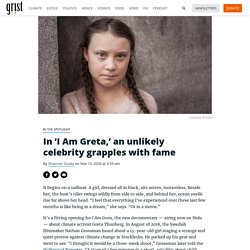 A girl, dressed all in black, sits astern, motionless. Beside her, the boat’s tiller swings wildly from side to side, and behind her, ocean swells rise far above her head. “I feel that everything I’ve experienced over these last few months is like being in a dream,” she says. 17 sept. 2020 Jancovici : Sortir du désastre écologique - The SwissBoxConversation - 17/09/2020. Portuguese youth are suing 33 countries over the climate crisis By Jonathan Watts on Sep 6, 2020. This story was originally published by The Guardian and is reproduced here as part of the Climate Desk collaboration. 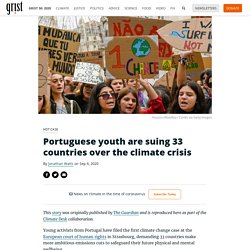 Young activists from Portugal have filed the first climate change case at the European court of human rights in Strasbourg, demanding 33 countries make more ambitious emissions cuts to safeguard their future physical and mental wellbeing. The crowdfunded legal action breaks new ground by suing multiple states both for the emissions within their borders and also for the climate impact that their consumers and companies have elsewhere in the world through trade, fossil-fuel extraction, and outsourcing. The plaintiffs — four children and two young adults — want the standard-setting court to issue binding orders on the 33 states, which include the E.U. as well as the U.K., Norway, Russia, Turkey, Switzerland, and Ukraine, to prevent discrimination against the young and protect their rights to exercise outdoors and live without anxiety. 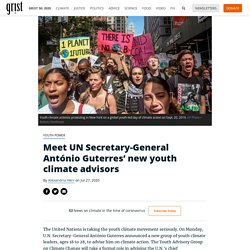 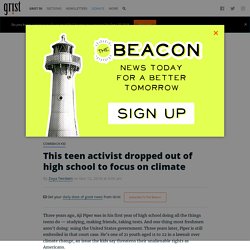 And one thing most freshmen aren’t doing: suing the United States government. Three years later, Piper is still embroiled in that court case. He’s one of 21 youth aged 11 to 22 in a lawsuit over climate change, an issue the kids say threatens their unalienable rights as Americans. It’s been a bumpy road, and victory is nowhere in sight. The government has tried to derail Juliana v.

That means Piper’s future is in limbo, too. How to build a climate movement before your 17th birthday. Three kids learned about Greta Thunberg for Earth Day, and their reactions are 100% wholesome. Teresa Chin is a senior editor at Grist. 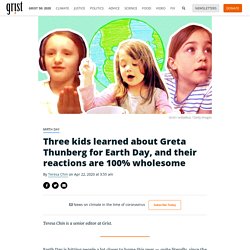 Earth Day is hitting people a lot closer to home this year — quite literally, since the coronavirus pandemic means most of us are trying not to leave our houses. Shifting gears: The climate protest movement in the age of coronavirus. This story was originally published by Yale Environment 360 and is reproduced here as part of the Climate Desk collaboration. 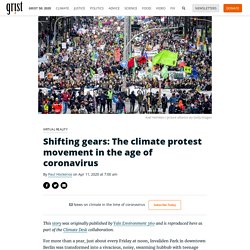 The petition is certainly an impressive step, but it is neither groundbreaking nor a lawsuit. Want the lowdown on what the petition actually means and how it could effect change? Keep reading. The Convention on the Rights of the Child is an international human rights treaty adopted by the U.N. The 16 kids who brought the petition to the U.N. this week are arguing that their rights as laid out under the treaty are being violated by world governments that aren’t doing enough to combat climate change. Greta Thunberg laisse sa colère s'exprimer au sommet de l'ONU. Climat, la jeunesse s’organise et se mobilise. Côme Girschig : « Nous sommes légitimes pour parler et agir  pour le climat.

Meet the other Greta Thunbergs at the first-ever U.N. Youth Climate Summit. Less than 24 hours after young people took to the streets for what was probably the largest climate protest in history, hundreds of youth organizers and young environmental leaders from around the world were up bright and early Saturday morning at the U.N. headquarters in New York City for the first-ever Youth Climate Summit. A few notable names such as Greta Thunberg, Jamie Margolin, Alexandria Villaseñor, and Isra Hirsi held court in busy U.N. halls and chambers, giving media interviews and demanding that world leaders take climate action. But in quieter corners of the U.N. complex, where people weren’t flocking, Grist spoke to a handful of unknown Gretas who are fighting no less vigorously than Thunberg for climate action.

Greta! Thousands of Amazon employees walk out for climate strike. “Were gonna strike cause the waters are rising, we’re gonna strike cause people are dying,” an Amazon organizer sang into a bullhorn in front of a crowd of around 3,000 at Amazon’s headquarters in Seattle on Friday. Behind him, the Amazon spheres — two geodesic domes reminiscent of Buckminster Fuller’s failed experiment — glinted in the sunlight. Someone held a sign in front of the spheres reading: “Spheres are cool.

Don’t wanna live in one.” Amazon employees have been organizing in the name of climate change for months now. Greta Thunberg et Fridays for Future, prix d’Ambassadeur de la Conscience 2019. Greta Thunberg to Congress: ‘You’re not trying hard enough. Sorry.’ This story was originally published by the Guardian and is reproduced here as part of the Climate Desk collaboration. At a meeting of the Senate climate crisis task force on Tuesday, lawmakers praised a group of young activists for their leadership, their gumption, and their display of wisdom far beyond their years.

They then asked the teens for advice on how Congress might combat one of the most urgent and politically contentious threats confronting world leaders: climate change. Greta Thunberg, the 16-year-old Swedish activist who has galvanized young people across the world to strike for more action to combat the impact of global warming, politely reminded them that she was a student, not a scientist — or a senator. “Please save your praise. We don’t want it,” she said. ‘Never give up’: Greta Thunberg takes climate strike to the White House. This story was originally published by HuffPost and is reproduced here as part of the Climate Desk collaboration. WASHINGTON — Greta Thunberg, the famous 16-year-old Swedish environmental activist who kicked off a global movement of students leaving school to demand action on the climate crisis, joined other youth activists at a rally outside the White House on Friday. A few hundred people, mostly teenagers and young children, gathered on the Ellipse south of the White House carrying signs that read “I want you to panic!”

And “Why are we studying for a future we won’t have?” SOLIDARITÉ AVEC LA GRÈVE POUR LE CLIMAT. 246 291 personnes ont signé. Greta Thunberg: We need a ‘concrete plan’ for climate action, not nice words. This story was originally published by the Guardian and is reproduced here as part of the Climate Desk collaboration. Unprecedented pressure exerted by young activists will push world leaders to address the unfolding climate crisis, even with a recalcitrant U.S. under Donald Trump, Greta Thunberg told the Guardian. Greta Thunberg adds her voice to a new song by The 1975. Soutenez-vous la démarche de Greta Thunberg, militante pour le climat ? How 21 meddling kids could force a climate turnaround. Le Bulletin de Ruffin #57 : préparons la crise ! Aix-la-Chapelle : la mobilisation des jeunes pour le climat continue de plus belle.