Topuniversities. Free online courses from world-leading universities: sounds a bit too good to be true, doesn’t it? 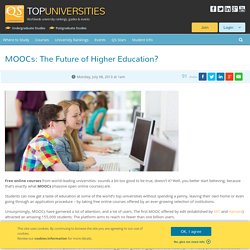 Well, you better start believing, because that’s exactly what MOOCs (massive open online courses) are. Students can now get a taste of education at some of the world’s top universities without spending a penny, leaving their own home or even going through an application procedure – by taking free online courses offered by an ever-growing selection of institutions. Unsurprisingly, MOOCs have garnered a lot of attention, and a lot of users. The first MOOC offered by edX (established by MIT and Harvard) attracted an amazing 155,000 students. The platform aims to reach no fewer than one billion users. Anant Agarwal - The Colbert Report - 2013-24-07 - EdX. Who Is Driving the Online Locomotive? - Advice. 50 Top Sources Of Free eLearning Courses.

Whether you are looking for a master’s degree program, computer science classes, a K-12 curriculum, or GED study program, this list gives you a look at 50 websites that promise education for free. 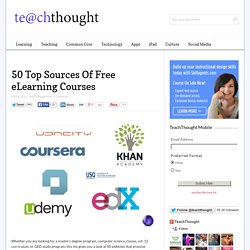 From databases that organize over 1,000,000 students throughout 16 universities, to a small library of documents for those interested in history, the opportunities for free online learning continue to expand as the Internet becomes a crucial component in education. Effective Habits of Power Users: A Look At Recent MOOC Research. Recently published research on student behavior in the first edX MOOC reveals some interesting insights about the persistence of certificate earners and about the time they put into the various course activities. 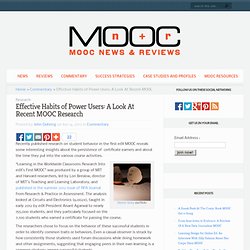 “Learning in the Worldwide Classroom: Research Into edX’s First MOOC” was produced by a group of MIT and Harvard researchers, led by Lori Breslow, director of MIT’s Teaching and Learning Laboratory, and published in the summer 2013 issue of RPA Journal from Research & Practice in Assessment. The analysis looked at Circuits and Electronics (6.002x), taught in early 2012 by edX President Anant Agarwal to nearly 155,000 students, and they particularly focused on the 7,100 students who earned a certificate for passing the course.

The researchers chose to focus on the behavior of these successful students in order to identify common traits or behaviors. Even before the study, the forum use surprised faculty. Saylor.org – Free Online Courses Built by Professors. What is a MOOC?

Bill Gates' classroom of the future - Mar. 8, 2013. The Professors Behind the MOOC Hype - Technology. Dave Chidley for The Chronicle Paul Gries, of the U. of Toronto, has taught MOOCs on computer science. 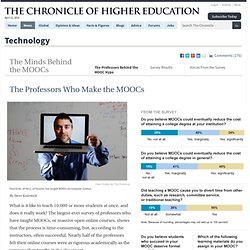 By Steve Kolowich What is it like to teach 10,000 or more students at once, and does it really work? The largest-ever survey of professors who have taught MOOCs, or massive open online courses, shows that the process is time-consuming, but, according to the instructors, often successful. Nearly half of the professors felt their online courses were as rigorous academically as the versions they taught in the classroom.

The survey, conducted by The Chronicle, attempted to reach every professor who has taught a MOOC. Hype around these new free online courses has grown louder and louder since a few professors at Stanford University drew hundreds of thousands of students to online computer-science courses in 2011. Princeton University's Robert Sedgewick is one of them. Study at the OU - Degrees, Diplomas, Courses, Certificates and Qualifications. The Stanford Education Experiment Could Change Higher Learning Forever.

Sebastian Thrun and Peter Norvig in the basement of Thrun's guesthouse, where they record class videos.Photo: Sam Comen Stanford doesn’t want me. 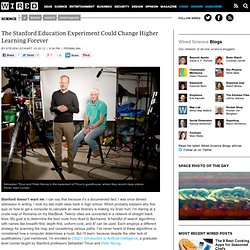 I can say that because it’s a documented fact: I was once denied admission in writing. I took my last math class back in high school. Which probably explains why this quiz on how to get a computer to calculate an ideal itinerary is making my brain hurt. Oh, the irony: Coursera suspends online course about how to run an online course. A Coursera instructor offering an online course on how to manage an online course has apparently given her students – all 40,000 of them – an unintentional lesson on how not to do just that. 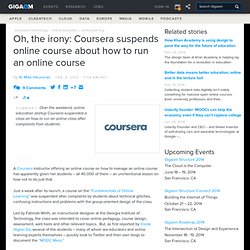 Just a week after its launch, a course on the “Fundamentals of Online Learning” was suspended after complaints by students about technical glitches, confusing instructions and problems with the group-oriented design of the class. Led by Fatimah Wirth, an instructional designer at the Georgia Institute of Technology, the class was intended to cover online pedagogy, course design, assessment, web tools and other relevant topics. But, as first reported by Inside Higher Ed, several of the students – many of whom are educators and online learning experts themselves – quickly took to Twitter and their own blogs to document the “MOOC Mess.”

The MOOC Honeymoon is Over: Three Takeaways from the Coursera Calamity. The honeymoon with MOOCs is over. 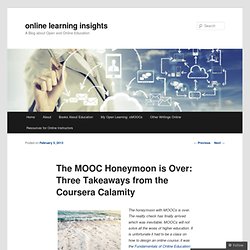 The reality check has finally arrived which was inevitable. MOOCs will not solve all the woes of higher education. It is unfortunate it had to be a class on how to design an online course; it was the Fundamentals of Online Education: Planning and Application [FOE] offered through Coursera that brought things to a screeching halt. But this experience can provide an opportunity for institutions to re-focus—identify the role and purpose of MOOCs and move forward with a thoughtful, purposeful strategy. 14 Articles on MOOCs. Size Isn’t Everything – Cathy Davidson – The Chronicle Review – The Chronicle of Higher Education Wired UK raises the possibility that the university may have to restructure itself. 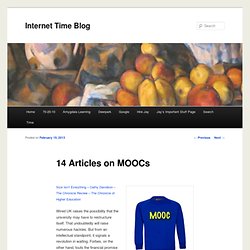 That undoubtedly will raise numerous hackles. But from an intellectual standpoint, it signals a revolution in waiting. Forbes, on the other hand, touts the financial promise of investments in MOOC’s and other digital educational offerings. Entrepreneurs and college administrators are already heeding that siren call. Moodle.org: open-source community-based tools for learning. Daphne Koller: What we're learning from online education. Online learning: Campus 2.0. When campus president Wallace Loh walked into Juan Uriagereka's office last August, he got right to the point. 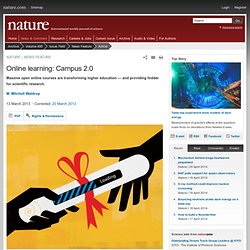 “We need courses for this thing — yesterday!” Uriagereka, associate provost for faculty affairs at the University of Maryland in College Park, knew exactly what his boss meant. Jump Off the Coursera Bandwagon - Commentary. By Doug Guthrie Like lemmings, too many American colleges are mindlessly rushing out to find a way to deliver online education, and more and more often they are choosing Coursera.

The company, founded this year by two Stanford University computer scientists, has already enrolled more than two million students, has engaged 33 academic institutions as partners, and is offering more than 200 free massive open online courses, or MOOC's. A college's decision to jump on the Coursera bandwagon is aided—and eased—by knowing that academic heavyweights like Harvard, Stanford, and the Massachusetts Institute of Technology are already on board. As one college president described it to The New York Times, "You're known by your partners, and this is the College of Cardinals. " Introduction to Online Learning: Are You Ready to Be an Online Learner? "Change is the end result of all true learning. 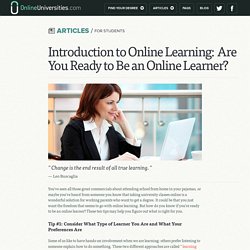 " — Leo Buscaglia You’ve seen all those great commercials about attending school from home in your pajamas, or maybe you’ve heard from someone you know that taking university classes online is a wonderful solution for working parents who want to get a degree. It could be that you just want the freedom that seems to go with online learning. But how do you know if you’re ready to be an online learner? These ten tips may help you figure out what is right for you. MOOC's and Other Faster Horses.