What is a MOOC? To MOOC or Not to MOOC – WorldWise. MOOCs have become a media obsession. 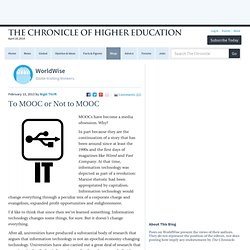 Why? In part because they are the continuation of a story that has been around since at least the 1990s and the first days of magazines like Wired and Fast Company. At that time, information technology was depicted as part of a revolution: Marxist rhetoric had been appropriated by capitalism. Information technology would change everything through a peculiar mix of a corporate charge and evangelism, expanded profit opportunities and enlightenment.

I’d like to think that since then we’ve learned something. After all, universities have produced a substantial body of research that argues that information technology is not an epochal economy-changing technology. These sources must induce at least some suspicion about the wider claims concerning MOOCs, or massive open online courses. Why this obsession with MOOCs? Second, because it taps into a vein of middle-class anger over tuition costs. And there is a historical irony about all this, too. Return to Top. Online Universities: Compare 2014's Best Universities. Coursera. Veertigduizend studenten in de zaal. HIST103: World History in the Early Modern and Modern Eras (1600-Present)

This course will present a comparative overview of world history from the 17th century to the present era. 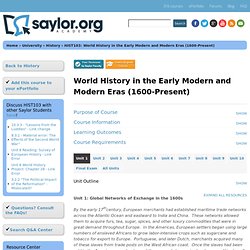 You will examine the origins of major economic, political, social, cultural, and technological trends of the past 400 years and explore the impact of these trends on world societies. This course will be structured chronologically and thematically, with each unit focusing on a significant historical subject. The units will include representative primary-source documents and images that illustrate important overarching themes, such as the emergence of modern nation-states, the economic and technological interactions between Western and non-Western peoples, the changing social and cultural perceptions about religion and the state, and the development of physical and virtual networks of information exchange. This course is designed to align with Thomas Edison State College TECEP examination.

MOOCs and Historical Research. At first glance one might imagine that the challenges presented by massive open online courses (MOOCs) have everything to do with teaching and nothing to do with historical research. 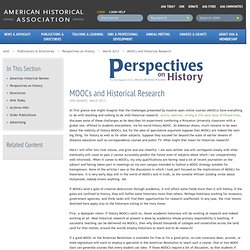 Jeremy Adelman, writing in this same issue of Perspectives, discusses some of these challenges as he describes his experiment combining a Princeton University classroom with a global one, offered to students everywhere, via his world history MOOC. As Adelman shows, much remains to be seen about the viability of history MOOCs, but for the sake of speculative argument suppose that MOOCs are indeed the next big thing, for history as well as for other subjects.

Suppose they succeed far beyond the scale of earlier dreams of distance education such as correspondence courses and public TV. What might that mean for historical research? Here I will offer two rival visions, one grim and one cheerful. If MOOCs send a gale of creative destruction through academia, it will affect some fields more than it will history. MOOCs face challenges in teaching humanities. Even as massive open online courses (MOOCs) continue to assume an increasingly prominent role in education, regularly enrolling thousands of students from around the world in classes taught by professors from dozens of universities, their rapid growth has sparked a backlash focused on the potential loss of diversity and interaction in education. 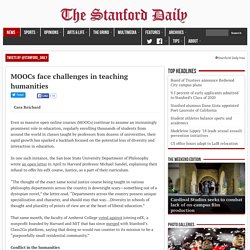 In one such instance, the San Jose State University Department of Philosophy wrote an open letter in April to Harvard professor Michael Sandel, explaining their refusal to offer his edX course, Justice, as a part of their curriculum. “The thought of the exact same social justice course being taught in various philosophy departments across the country is downright scary—something out of a dystopian novel,” the letter read. Introduction to Digital Humanities. MOOCs are perhaps the hottest topic both in the DH community and throughout the education system. 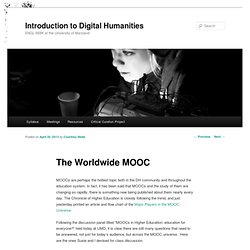 In fact, it has been said that MOOCs and the study of them are changing so rapidly, there is something new being published about them nearly every day. The Chronicle of Higher Education is closely following the trend, and just yesterday printed an article and flow chart of the Major Players in the MOOC Universe. Following the discussion panel titled “MOOCs in Higher Education: education for everyone?” Held today at UMD, it is clear there are still many questions that need to be answered, not just for today’s audience, but across the MOOC universe. Here are the ones Susie and I devised for class discussion. Funding • Where is the money coming from? Access • What are issues with public vs. private institutions? Purpose & Benefits • What can you “do” with a MOOC? Pedagogy • How do MOOCs differ from a traditional campus-based education? 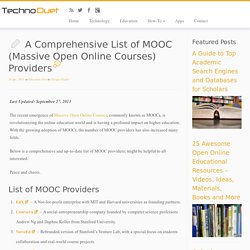 Why the campus is still king in the age of the MOOC. With higher education increasingly going online and the recent arrival of Massive Open Online Courses (MOOCs), many have predicted the death of the university campus. 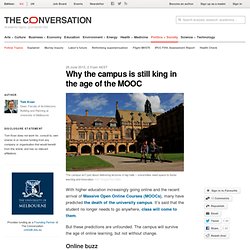 It’s said that the student no longer needs to go anywhere, class will come to them. But these predictions are unfounded. The campus will survive the age of online learning, but not without change. Online buzz MOOCs might be novel right now, but the truth is teaching materials, such as lectures, have been available for little or no cost to students for longer than most can remember. Yet even OU still engages with students on campuses – not only their own, but also on underused campuses of other institutions. Before MOOCs were even thought of, many institutions had also done away with campuses all together.