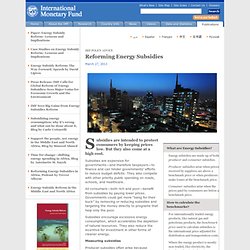 But they also come at a high cost. Subsidies are expensive for governments—and therefore taxpayers—to finance and can hinder governments’ efforts to reduce budget deficits. They also compete with other priority public spending on roads, schools, and healthcare. All consumers—both rich and poor—benefit from subsidies by paying lower prices. Subsidies encourage excessive energy consumption, which accelerates the depletion of natural resources. Energy/files/edcc-whitepaper. Rio Declaration - Rio Declaration on Environment and Development. 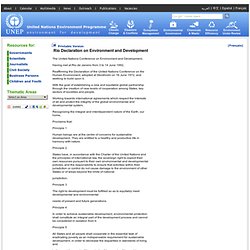 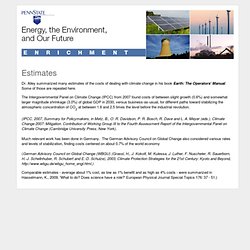 Alley summarized many estimates of the costs of dealing with climate change in his book Earth: The Operators' Manual. Publications & Documents. PISA › Publications & Documents 3-December-2013 English, PDF, 554kb PISA 2012 Results - Italy The Programme for International Student Assessment (PISA) is a triennial international survey which aims to evaluate education systems worldwide by testing the skills and knowledge of 15-year-old students. 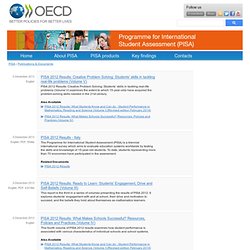 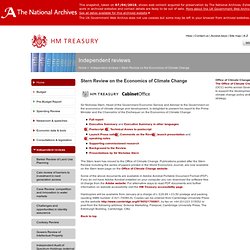 Publications posted after the Stern Review including the series of papers printed in the World Economics Journal, are now available on the Stern team page on the Office of Climate Change website. Some of the above documents are available in Adobe Acrobat Portable Document Format (PDF). If you do not have Adobe Acrobat installed on your computer you can download the software free of charge from the Adobe website. For alternative ways to read PDF documents and further information on website accessibility visit the HM Treasury accessibility page.

Golden Rule. Book with "Dieu, la Loi, et le Roi" ("God, the law and the king") on one page and the golden rule on the other, by Bernard d'Agesci. 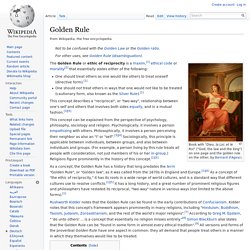 One should treat others as one would like others to treat oneself (directive form).[1]One should not treat others in ways that one would not like to be treated (cautionary form, also known as the Silver Rule).[1] This concept describes a "reciprocal", or "two-way", relationship between one's self and others that involves both sides equally, and in a mutual fashion.[3][4] This concept can be explained from the perspective of psychology, philosophy, sociology and religion. Psychologically, it involves a person empathizing with others. Philosophically, it involves a person perceiving their neighbor as also an "I" or "self".[3][4] Sociologically, this principle is applicable between individuals, between groups, and also between individuals and groups.

Lesson 12.2 Enrichment: Scarcity and Government Intervention in Colonial Massachusetts. Serious European settlement of Cape Cod in Massachusetts, USA began with the arrival of the Pilgrims in 1620. 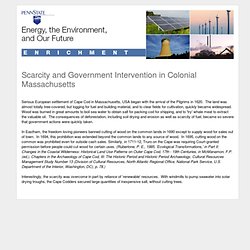 The land was almost totally tree-covered, but logging for fuel and building material, and to clear fields for cultivation, quickly became widespread. Wood was burned in great amounts to boil sea water to obtain salt for packing cod for shipping, and to 'try' whale meat to extract the valuable oil. The consequences of deforestation, including soil drying and erosion as well as scarcity of fuel, became so severe that government actions were quickly taken. In Eastham, the freedom-loving pioneers banned cutting of wood on the common lands in 1690 except to supply wood for sales out of town. In 1694, this prohibition was extended beyond the common lands to any source of wood. Global Gaps in Clean Energy RD&D - global_gaps. 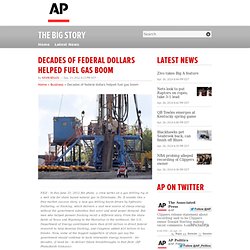 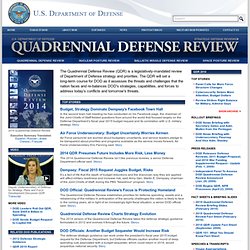 The QDR will set a long-term course for DOD as it assesses the threats and challenges that the nation faces and re-balances DOD's strategies, capabilities, and forces to address today's conflicts and tomorrow's threats. Top Stories Budget, Strategy Dominate Dempsey’s Facebook Town Hall In the second town hall meeting he has conducted on his Facebook page, the chairman of the Joint Chiefs of Staff fielded questions from around the world that focused largely on the Defense Department’s fiscal year 2015 budget request and its correlation with U.S. military strategy.

Lesson 11.4 Enrichment: Living with Wind Turbines and Coal Exhaust. We can't look at all of the externalities of all of the different energy sources. 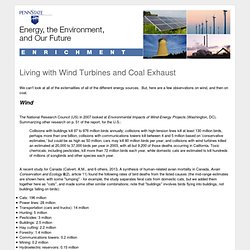 But, here are a few observations on wind, and then on coal. Wind The National Research Council (US) in 2007 looked at Environmental Impacts of Wind-Energy Projects (Washington, DC). Summarizing other research on p. 51 of the report, for the U.S. Collisions with buildings kill 97 to 976 million birds annually; collisions with high-tension lines kill at least 130 million birds, perhaps more than one billion; collisions with communications towers kill between 4 and 5 million based on 'conservative estimates,' but could be as high as 50 million; cars may kill 80 million birds per year; and collisions with wind turbines killed an estimated at 20,000 to 37,000 birds per year in 2003, with all but 9,200 of those deaths occurring in California.

Power lines might carry electricity from wind energy, but also might carry electricity made with oil and gas, or other sources. Coal Levy et al. Global Patterns of Carbon Dioxide. Almost any discussion of global warming begins or ends with carbon dioxide. Because of its molecular structure, carbon dioxide is a greenhouse gas, which means it allows visible light from the Sun to pass through the atmosphere while absorbing and reemitting infrared energy, heating the Earth.

Greenhouse gases act as insulation and are responsible for making Earth’s climate comfortable—without them, our planet would have an average temperature of -18 Celsius (0 Fahrenheit). Since the beginning of the Industrial Revolution, people have been releasing carbon dioxide into the atmosphere by burning fossil fuels and clearing forests. By adding extra greenhouse gases to the atmosphere, people are raising the planet’s temperature with wide-ranging impacts. FULL TEXT OF THE CONVENTION, ARTICLE 2. Lesson 11.2 Enrichment: Coal Mining Jobs. Suppose that we consider the fates of two people, a coal miner from a mid-latitude place such as Poland or Pennsylvania, and a subsistence farmer from a low-latitude place such as the Sahel. Suppose further that because of resource depletion and technological change including cheap fracked gas, the coal-miner's job is ultimately unsustainable; in contrast, the farmer's job was sustainable if very difficult in the face of natural weather events, but is being made ultimately unsustainable by the additional stress from climate change.

(Yes, we just made several suppositions, and the individual case here may not be accurate, but the broader issues are relevant.) In the coal miner's case, even though the job is ultimately going to be lost for economic reasons, some triggering event is likely to control the exact timing, and that event may be the start of a new government regulation to limit climate change. Legistlative Analysis. Effects of a Carbon Tax on the Economy and the Environment - 44223_Carbon_0.pdf. Green Button: Enabling Energy Innovation. Posted by Monisha Shah and Nick Sinai on May 02, 2013 at 09:12 AM EDT This article is cross-posted from the Council on Environmental Quality blog Last year, in response to the Obama Administration’s call to action, 35 utilities and energy providers committed to provide 36 million homes and businesses with their own energy usage information in the consensus, industry-standard Green Button format.

Not only are utilities implementing Green Button Download My Data across the country for homes and businesses to securely download their information, but utilities in California and the Mid-Atlantic are beginning to implement Green Button Connect My Data functionality— making it easier for their customers to securely transfer their own energy usage data to authorized third parties, based on affirmative (opt-in) customer consent and control.

Ethics in Climate Change — Rock Ethics Institute. "If we did not take action to solve this crisis, it could indeed threaten the future of human civilization...I believe it's deadly accurate. But again, we can solve it. " Al Gore According to the Environmental Justice Foundation, every year climate change is attributable for the deaths of over 300,000 people, seriously affects a further 325 million people, and causes economic losses of US $125 billion. Four billion people are vulnerable to the effects of climate change and 500-600 million people – around 10% of the planet’s human population – are at extreme risk.