Why I’m bothered by ‘solving real-world problems with MOOCs’ I read A New Use for MOOCs: Real-World Problem Solving with interest on many levels: pedagogy, innovative partnerships, leveraging massive groups of people in novel ways. 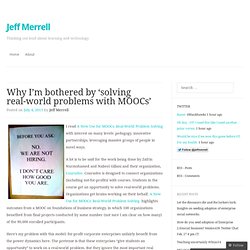 A lot is to be said for the work being done by Zafrin Nurmohamed and Nabeel Gillani and their organization, Coursolve. Coursolve is designed to connect organizations (including not-for-profits) with courses. Students in the course get an opportunity to solve real-world problems. Organizations get brains working on their behalf. A New Use for MOOCs: Real-World Problem Solving highlights outcomes from a MOOC on foundations of business strategy, in which 100 organizations benefited from final projects conducted by some number (not sure I am clear on how many) of the 90,000 enrolled participants. MOOCs and the McDonaldization of Education – George Ritzer. Blog George Ritzer, Introduction to Sociology. 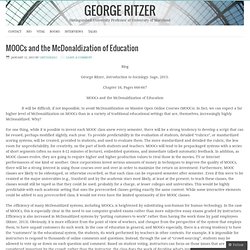 Sage, 2013. Chapter 16, Pages 666-667 MOOCs and the McDonaldization of Education It will be difficult, if not impossible, to avoid McDonaldization on Massive Open Online Courses (MOOCs). For one thing, while it is possible to invent each MOOC class anew every semester, there will be a strong tendency to develop a script that can be reused, perhaps modified slightly, each year. The efficiency of many McDonaldized systems, including MOOCs, is heightened by substituting non-human for human technology.

MOOCs tend to limit, if not eliminate, the processes that might serve to make education less McDonaldized. References Lewin, Tamar. Ritzer, George. Ritzer, George, ed. xMOOC vs. cMOOC - MOOC Pedagogy. I only learned recently that I’ve not been enrolled in MOOC classes at all, but have instead been involved with something called an xMOOC. 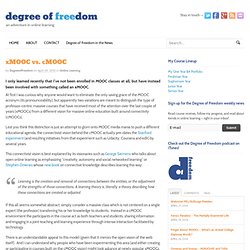 At first I was curious why anyone would want to eliminate the only saving grace of the MOOC acronym (its pronounceability), but apparently two variations are meant to distinguish the type of professor-centric massive courses that have received most of the attention over the last couple of years (xMOOCs) from a different vision for massive online education built around connectivity (cMOOCs). Lest you think this distinction is just an attempt to glom onto MOOC media mania to push a different educational agenda, the connectivist vision behind the cMOOC actually pre-dates the Stanford experiment (and resulting initiatives from that experiment such as Udacity, Coursera and edX) by several years. 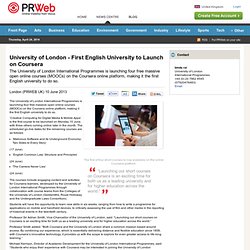 ‘Creative Computing for Digital Media & Mobile Apps’ is the first course to be launched on Monday 10 June, with three others coming online later in the month. Who is “buying” MOOCs? It’s Monday morning. 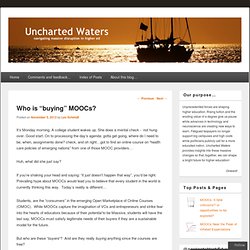 A college student wakes up. She does a mental check - not hung over. Good start. On to processing the day’s agenda: gotta get going, where do I need to be, when, assignments done? Check, and oh right…got to find an online course on “health care policies of emerging nations” from one of those MOOC providers… Huh, what did she just say? If you’re shaking your head and saying: “it just doesn’t happen that way”, you’d be right. The Ultimate Student Guide to xMOOCs and cMOOCs. The education media declared 2012 the year of the MOOC, and even mainstream news featured numerous stories about Massive Open Online Courses, some suggesting that this new type of course would revolutionize the model of higher education. 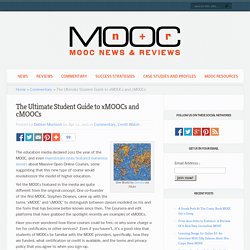 Yet the MOOCs featured in the media are quite different from the original concept. One co-founder of the first MOOC, Stephen Downes, came up with the terms ‘xMOOC’ and ‘cMOOC’ to distinguish between classes modeled on his and the form that has become better known since then. The Coursera and edX platforms that have grabbed the spotlight recently are examples of xMOOCs. Have you ever wondered how these courses could be free, or why some charge a fee for certificates or other services? CLIPP Board » Durham BB & MOOCs. This post covers the two keynotes I attended at the recent Blackboard users group in Durham. 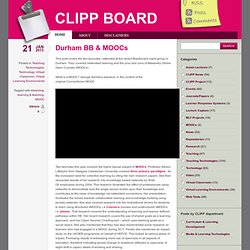 They covered networked learning and the pros and cons of Massively Online Open Courses (MOOCs). What is a MOOC? George Siemens explains, in the context of the original Connectivism MOOC Two keynotes this year covered the highly topical subject of MOOCs. Professor Allison Littlejohn from Glasgow Caledonian University covered three primary paradigms for the increased need for collective learning by citing her own research papers. Jeremy Knox of Edinburgh University covered the MOOC Pedagogy, developing for Coursera in his keynote on day 2. Jeremy stated that their Coursera course (‘E-Learning and Digital Cultures) is being viewed as a complement to on campus learning – not a disruptive area. 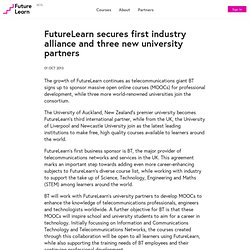 The University of Auckland, New Zealand’s premier university becomes FutureLearn’s third international partner, while from the UK, the University of Liverpool and Newcastle University join as the latest leading institutions to make free, high quality courses available to learners around the world. What Are the Opportunities—and Risks—in the Massive Open Online Course (MOOC) Business Model? European Journal of Open, Distance and E-Learning. The European Journal of Open, Distance and E-Learning – EURODL is an electronic, multi-media journal on distance and e-learning distributed on the Internet. 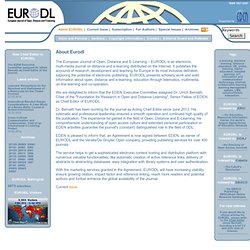 It publishes the accounts of research, development and teaching for Europe in its most inclusive definition, exploring the potential of electronic publishing. EURODL presents scholarly work and solid information about open, distance and e-learning, education through telematics, multimedia, on-line learning and co-operation. We are delighted to inform that the EDEN Executive Committee assigned Dr. MOOCs as ecologies – or – why i work on MOOCs. Finally a few minutes with me putting down my new guitar attachment, the cottage plans and the general fun of having a two and a five year old and a partner doing her phd to talk about some of the interesting work coming up. 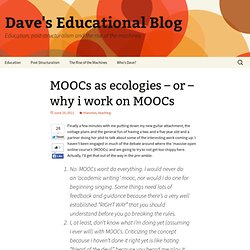 I haven’t been engaged in much of the debate around where the ‘massive open online course’s (MOOCs) and am going to try to not get too chippy here. Actually, I’ll get that out of the way in the pre-amble. No. MOOCs wont do everything. I would never do an ‘academic writing’ mooc, nor would i do one for beginning singing. Higher education: The attack of the MOOCs. xMOOC? cMOOC? EDCMOOC – E-Learning & Digital Cultures. I’ve been meaning to jot down my notes on the E-Learning and Digital Cultures (EDCMOOC) course for some time; last week, the University of Edinburgh published a detailed report on their Spring 2013 Coursera offerings, which has given me a bit of a prod to write this post.

The course began on 28th January, and ran for 5 weeks. In a sense, it had begun before the start date, as the course team had encouraged students to connect through social media channels in preparation. This had passed me by though as I’d not been paying enough attention to the pre-course emails. 99 Best Online College Resources on Open Courseware & MOOCs. With the increasing popularity of online education has come a profusion of Massively Open Online Courses (MOOCs), Open Courseware (OCW), Open Educational Resources (OER), and other general educational resources that can be accessed online. MOOCs are usually full courses with actual assignments and a similar structure to a traditional college class, whereas OCW and OER are simply resources, such as textbooks, class rubrics, and other corollary materials that students can use to guide their independent learning.

This collection isn’t intended as an ordered ranking comparing the quality of these sites, but a repository of great resources for anyone who wants to learn more about MOOCs and OCW. Many companies have set up platforms that anyone can use to create and promote MOOCs, and as the MOOC format gets more popular, there will doubtlessly be heavy competition to create the best course creation and hosting service.