DIRE STRAITS LYRICS - Brothers In Arms. These mist-covered mountains Are a home now for me But my home is the lowlands And always will be Some day you'll return to Your valleys and your farms And you'll no longer burn To be brothers in arms Through these fields of destruction Baptisms of fire I've witnessed your suffering As the battle raged high And though they did hurt me so bad In the fear and alarm You did not desert me My brothers in arms There's so many different worlds So many different suns And we have just one world But we live in different ones Now the sun's gone to hell And the moon riding high Let me bid you farewell Every man has to die But it's written in the starlight And every line in your palm We're fools to make war On our brothers in arms Thanks to James, Francis, faye, Deanna, sharon for correcting these lyrics. 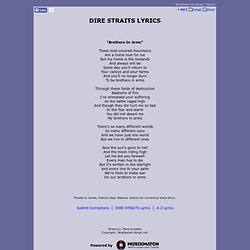 Writer(s): Mark Knopfler Copyright: Straitjacket Songs Ltd. DIRE STRAITS lyrics are property and copyright of their owners. " John Schumann. COLD CHISEL LYRICS - Khe Sanh. I left my heart to the sappers round Khe Sanh And my soul was sold with my cigarettes to the blackmarket man I've had the Vietnam cold turkey From the ocean to the Silver City And it's only other vets could understand About the long forgotten dockside guarantees How there were no V-dayheroes in 1973 How we sailed into Sydney Harbour Saw an old friend but couldn't kiss her She was lined, and I was home to the lucky land And she was like so many more from that time on Their lives were all so empty, till they found their chosen one And their legs were often open But their minds were always closed And their hearts were held in fast suburban chains And the legal pads were yellow, hours long, paypacket lean And the telex writers clattered where the gunships once had been But the car parks made me jumpy And I never stopped the dreams Or the growing need for speed and novacaine COLD CHISEL lyrics are property and copyright of their owners. 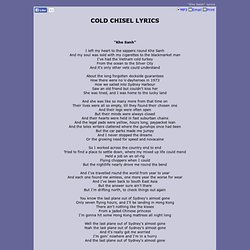 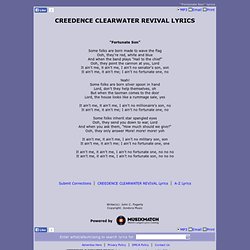 The eastern world it is exploding Violence flarin', bullets loadin' You're old enough to kill but not for votin' You don't believe in war but whats that gun you're totin'? 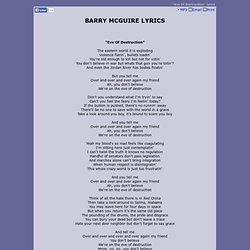