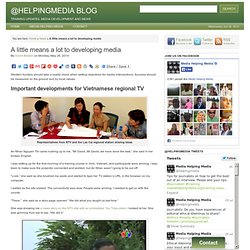 Success should be measured on the ground and by local values. Important developments for Vietnamese regional TV Representatives from NTV and the Lao Cai regional station sharing ideas An Nhan Nguyen Thi came rushing up to me, “Mr David, Mr David, we have done the task,” she said in her broken English. I was setting up for the first morning of a training course in Vinh, Vietnam, and participants were arriving. “Look,” she said as she brushed me aside and started to type her TV station’s URL in the browser on my computer. I waited as the site loaded. “There,” she said as a story page opened. She was showing me a news story on the NTV site with an embedded You Tube video.

Google Adsense running on an NTV news story embedded in their site Her boss, Ngoc, who doesn’t speak a word of English, came over and joined in. Everyone started to laugh. Early steps in a multimedia strategy. Helpingmedia : At the end of 7 days training ... Vietnamese to launch hyperlocal news show. The news team at NTV (Nghe An TV and Radio) has taken the first step in creating an hour-long breakfast news show using only existing resources. 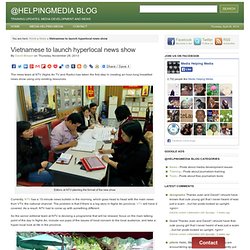 Editors at NTV planning the format of the new show Currently, NTV has a 15-minute news bulletin in the morning, which goes head to head with the main news from VTV, the national channel. The problem is that if there is a big story in Nghe An province, VTV will have it covered. As a result, NTV had to come up with something different. Vietnamese to launch hyperlocal news show. Triple boost for Vietnamese regional TV station. TV viewers in the Dak Lak province of Vietnam are now enjoying a new breakfast news and current affairs show, devised three months ago and launched a month later. 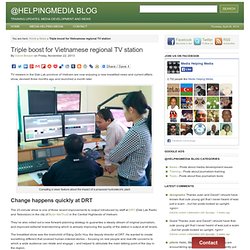 Compiling a news feature about the impact of a proposed hydroelectric plant Change happens quickly at DRT. Vietnamese broadcasters adapting for a digital future. DRT, Dak Lak Radio and Television, in Buon Ma Thuot A number of Vietnamese regional broadcasters are preparing for the switch to digital, with the help of journalism trainers and media consultants enlisted by the Fojo Media Institute. 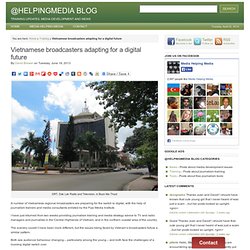 I have just returned from two weeks providing journalism training and media strategy advice to TV and radio managers and journalists in the Central Highlands of Vietnam, and in the northern coastal area of the country. The scenery couldn’t have been more different, but the issues being faced by Vietnam’s broadcasters follow a similar pattern. Journalism training manual published in Vietnamese.

A booklet containing a dozen training modules for radio and television journalists has been produced in order to help those attending media workshops at a number of Vietnamese regional TV stations. 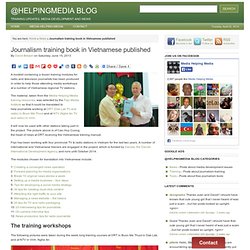 The material, taken from the Media Helping Media training resources, was selected by the Fojo Media Institute so that it could be translated to help journalists working at DRT (Dak Lak TV and radio) in Buon Ma Thuot and at NTV (Nghe An TV and radio) in Vinh. It will now be used with other stations taking part in the project. The picture above is of Cao Huy Cuong, the head of news at DRT receiving the Vietnamese training manual. Long Prison Terms for ‘Dissident’ Vietnam Bloggers. After attending a training course in Bangkok organized by Vietnam Reform Party or Viet Tan, 14 people were arrested by Vietnam authorities for allegedly participating in “activities aimed at overthrowing the people's administration.” 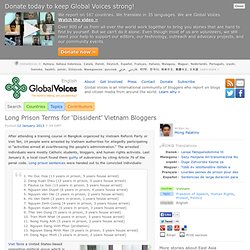 The arrested individuals were mostly Catholic students, bloggers, and human rights activists. Last January 9, a local court found them guilty of subversion by citing Article 79 of the penal code. RWB can prove innocence of convicted blogger Paulus Le Son. Reporters Without Borders is appalled at the groundless verdict handed down yesterday by a court in northern city of Vinh against eight bloggers and cyber dissidents. 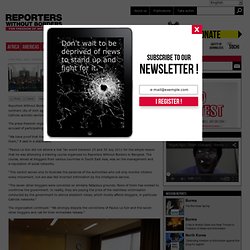 They were among a total of 14 Catholic activists sentenced to between three and 13 years’ imprisonment. What happened on the day of the Appeal Hearing for the members of The Free Journalist Network. Nguyen Hoang Vi - Passing the watching eyes of the security agents who were surrounding my house to attend the trial was difficult. 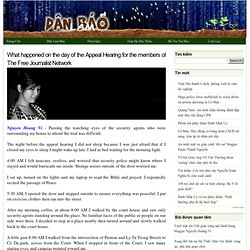 The night before the appeal hearing I did not sleep because I was just afraid that if I closed my eyes to sleep I might wake up late. I laid in bed waiting for the morning light. 4:00 AM I felt insecure, restless, and worried that security police might know where I stayed and would barricade me inside. Strange noises outside of the door worried me. I sat up, turned on the lights and my laptop to read the Bible and prayed. I repeatedly recited the passage of Peace. 5:30 AM, I opened the door and stepped outside to ensure everything was peaceful.

After my morning coffee, at about 8:00 AM I walked by the court house and saw only security agents standing around the place. A little past 8:00 AM I walked from the intersection of Pasteur and Ly Tu Trong Streets to Co Da park, across from the Court. . - I suggest you show me your ID card. - What! Civil Rights Defenders – Vietnam tightens grip on bloggers. A high profile appeals hearing against Dieu Cay and two other bloggers, in Ho Chi Minh City on 28 December, show that heavy-handed muffling of dissenting opinions continues in Vietnam. 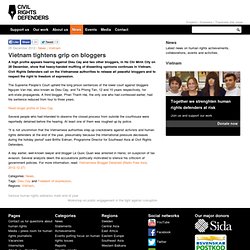 Civil Rights Defenders call on the Vietnamese authorities to release all peaceful bloggers and to respect the right to freedom of expression. The Supreme People’s Court upheld the long prison sentences of the lower court against bloggers Nguyen Van Hai, also known as Dieu Cay, and Ta Phong Tan, 12 and 10 years respectively, for anti-state propaganda. A third blogger, Phan Thanh Hai, the only one who had confessed earlier, had his sentence reduced from four to three years. Read longer profile of Dieu Cay Several people who had intended to observe the closed process from outside the courthouse were reportedly detained before the hearing. A day earlier, well-known lawyer and blogger Le Quoc Quan was arrested in Hanoi, on suspicion of tax evasion. Court upholds long jail sentences for bloggers on appeal. Reporters Without Borders condemns the rulings that courts issued today in the cases of three bloggers – Nguyen Van Hai (also known as Dieu Cay), Ta Phong Tan and Phan Thanh Hai (also known as Anhbasaigon) – and yesterday in the case of Nguyen Van Khuong, an investigative journalist also known as Hoang Khuong. 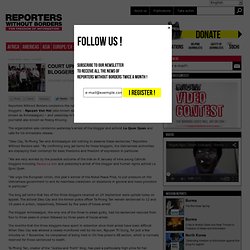 After the incident, she was followed daily by secret agents who captured photographs of her every move. Friday, July 13, 2012, was no exception. About 50 Vietnamese bloggers, including Vi Hoang Nguyen, were gathered at Huong Dong Restaurant 4 (Binh Thanh District, Saigon) to celebrate the birthdays of bloggers Tien Kim Trinh, Trang Dem, and Hang Minh Bui. After they left the party, the car of Vi Hoang Nguyen, Hang Bui, Lee Nguyen, Quyet Le and Mrs. Facebook’s foreign foes: five countries to conquer for new growth. Newspapers in Vietnam and the Caucasus benefit from sharing ideas. Vietnam: State of Social Media one year after Facebook block. When Vietnam blocked Facebook, everyone was talking about a smaller China. One year after the government's endeavor, Facebook Vietnam tells another story. Not only does Vietnam remain on the list of 10 countries with the fastest growth of Facebook users, Facebook marketing is enjoying a boom in this country with Facebook marketing agencies mushrooming all over Internet.

How many people in Vietnam are using Twitter, Zing me, go.vn and Facebook. Become a global media brand in 60 minutes. Journalism training without gimmicks. Between the Lines: Wave of independent journalism breaking over Vietnam. Whoever said that newspapers are dying hasn't been to Vietnam lately. I'm just back from two weeks of training young journalists in Hanoi and Ho Chi Minh City, and not only print media but the profession in general is thriving. This may come as news to those who equate a relatively closed political system with a compliant and monotonal press.

But in Vietnam, as in China, another doctrinaire communist state, the move toward a market economy has made rigid censorship impossible. Interested in measuring how media is helping media? Apply to be Director of Research and Learning at the Internews Center for Innovation and Learning. Viet Nam urged to release jailed blogger.