Radioactive Acoustic Chords (ver 4) by Imagine Dragons. Billy Jean Tab by The Civil Wars. FLEETWOOD MAC LYRICS - Dreams. Awake My Soul Chords (ver 2) by Mumford And Sons. Wholl Stop The Rain Chords by Creedence Clearwater Revival. Volcano tab by Damien Rice. How to Play Roxanne by The Police on an Acoustic Guitar. Outside Villanova Chords (ver 3) by Eric Hutchinson. JUSTIN TIMBERLAKE LYRICS - What Goes Around... / ...Comes Around Interlude. Hey girl, is he everything you wanted in a man? 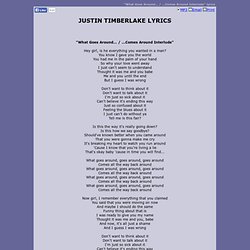 You know I gave you the world You had me in the palm of your hand So why your love went away I just can't seem to understand Thought it was me and you babe Me and you until the end But I guess I was wrong Don't want to think about it Don't want to talk about it I'm just so sick about it Can't believe it's ending this way Just so confused about it Feeling the blues about it I just can't do without ya Tell me is this fair? Is this the way it's really going down? Is this how we say goodbye? Should've known better when you came around That you were gonna make me cry It's breaking my heart to watch you run around 'Cause I know that you're living a lie That's okay baby 'cause in time you will find...

Love Interruption Chords by Jack White. Little Black Submarines Chords (ver 4) by Black Keys. Dont Think Twice Chords (ver 2) by Bob Dylan. Stand By Me Chords by Ben E King. All My Loving Chords by Beatles. Squeeze Box Chords by Who. BOB MARLEY LYRICS - I Shot The Sheriff. (I shot the sheriff But I didn't shoot no deputy, oh no! 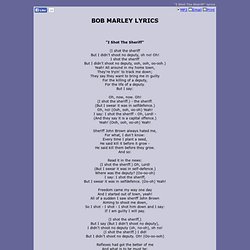 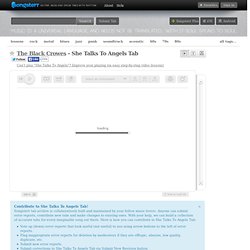 All new features are added to (or later) version only. Please upgrade to the latest Flash Player! Contribute to She Talks To Angels Tab! Songsterr tab archive is collaboratively built and maintained by your fellow music lovers. Anyone can submit error reports, contribute new tabs and make changes to existing ones. Vote up (down) error reports that look useful (not useful) to you using arrow buttons to the left of error reports. Tab Error Reports on rhythm figure there are harmonics on the 12th and 7th frets. No error reports so far. Revisions Have a better version of She Talks To Angels Tab in Guitar Pro format? Submit New Revision. The Story I Heard Chords (ver 2) by Blind Pilot. Ryan Lizza: Why Won’t Obama Rein in the N.S.A.? On March 12, 2013, James R. 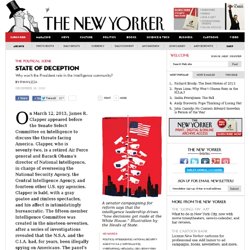 Clapper appeared before the Senate Select Committee on Intelligence to discuss the threats facing America. Clapper, who is seventy-two, is a retired Air Force general and Barack Obama’s director of National Intelligence, in charge of overseeing the National Security Agency, the Central Intelligence Agency, and fourteen other U.S. spy agencies. Clapper is bald, with a gray goatee and rimless spectacles, and his affect is intimidatingly bureaucratic.

The fifteen-member Intelligence Committee was created in the nineteen-seventies, after a series of investigations revealed that the N.S.A. and the C.I.A. had, for years, been illegally spying on Americans. The panel’s mission is to conduct “vigilant legislative oversight” of the intelligence community, but more often it treats senior intelligence officials like matinée idols. Toward the end of the hearing, Feinstein turned to Senator Ron Wyden, of Oregon, also a Democrat, who had a final question. “It does not?”