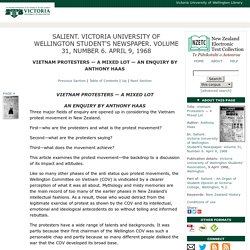 First—who are the protesters and what is the protest movement? Second—what are the protesters saying? Third—what does the movement achieve? This article examines the protest movement—the backdrop to a discussion of its impact and attitudes. Like so many other phases of the anti status quo protest movements, the Wellington Committee on Vietnam (COV) is vindicated by a clearer perception of what it was all about. The protesters have a wide range of talents and backgrounds. Barry Mitcalfe, had been little more than a spectator of the changing fashions in the protest movement until he formed the COV. He lectured, and still does in Polynesian studies at the Wellington Teachers College. The Guardian archive - click on this page for the article. Britain's biggest anti-Vietnam war demonstration ended in London yesterday with an estimated 300 arrests; 86 people were treated for injuries, and 50, including 25 policemen, one with a serious spine injury, were taken to hospital. 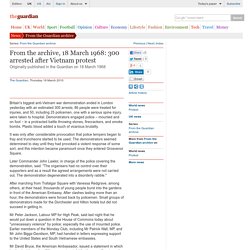 Demonstrators engaged police – mounted and on foot – in a protracted battle throwing stones, firecrackers, and smoke bombs. Plastic blood added a touch of vicarious brutality. It was only after considerable provocation that police tempers began to fray and truncheons started to be used. The demonstrators seemed determined to stay until they had provoked a violent response of some sort, and this intention became paramount once they entered Grosvenor Square.

Later Commander John Lawlor, in charge of the police covering the demonstration, said: "The organisers had no control over their supporters and as a result the agreed arrangements were not carried out. Mr David Bruce, the American Ambassador, issued a statement in which he thanked the police. VietnamWar. Scroll down for photos and personal accounts. There was a vocal and well-organised anti-war movement in New Zealand. Worldwide protest against the war centred on the policies and actions of the United States government. Critics of the war accused the New Zealand government of simply doing what the US told it to, and called for a more independent, less submissive foreign policy position. 161 Battery civic parade in Auckland, New Zealand and the Vietnam War. Scroll down for Personal accounts. The withdrawal of combat troops from Vietnam did nothing to stem the growth of the anti-war movement in New Zealand. 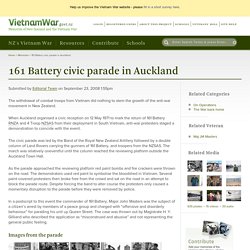 When Auckland organised a civic reception on 12 May 1971 to mark the return of 161 Battery RNZA and 4 Troop NZSAS from their deployment in South Vietnam, anti-war protesters staged a demonstration to coincide with the event. Book launch - "NZ and the Vietnam War:Politics and Diplomacy" at the Grand Hall, Parliament. It’s now forty years since New Zealand first sent combat forces to the war in Vietnam. 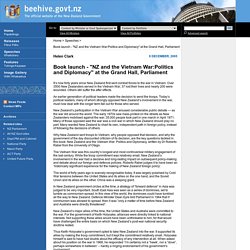 Over 3500 New Zealanders served in the Vietnam War; 37 lost their lives and nearly 200 were wounded. Others still suffer the after effects. An earlier generation of political leaders made the decision to send the troops. Today’s political leaders, many of whom strongly opposed New Zealand’s involvement in the war, must now deal with the longer term fall out for those who served. New Zealand’s participation in the Vietnam War aroused considerable public debate — as the war did around the world. Why New Zealand sent troops to Vietnam, why people opposed that decision, and why the government of the day discounted criticism of its decision, are the key questions tackled in this book: New Zealand and the Vietnam War: Politics and Diplomacy, written by Dr Roberto Rabel from the University of Otago.

Anti-Vietnam War protests in Queen Street, Auckland. A civic reception for 161 Battery on its return from Vietnam was disrupted by protesters who accused New Zealand soldiers of being murderers and threw red paint to symbolise the Vietnamese blood they had on their hands. 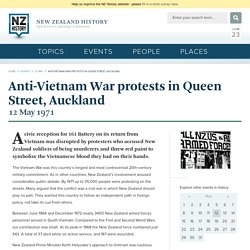 The Vietnam War was this country’s longest and most controversial 20th-century military commitment. As in other countries, New Zealand’s involvement aroused considerable public debate. By 1971 up to 35,000 people were protesting on the streets. Many argued that the conflict was a civil war in which New Zealand should play no part. They wanted this country to follow an independent path in foreign policy, not take its cue from others. Between June 1964 and December 1972 nearly 3400 New Zealand armed forces personnel served in South Vietnam. New Zealand Prime Minister Keith Holyoake’s approach to Vietnam was cautious. Image: Anti-war protest (VietnamWar.govt.nz)