Today's Document. The National Archives Catalog. Documents. Aggression from the North. Ngo-Dinh Diem Birthday Greetings to President Kennedy. Records of the Office of Strategic Services (RG 226): Entry 211. The Text Message » Vietnam and the Ironies of History. “This is an American soldier – he is your friend.” 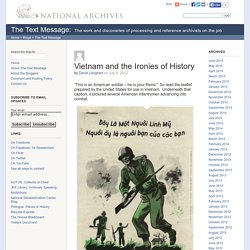 So read the leaflet prepared by the United States for use in Vietnam. Underneath that caption, it pictured several American infantrymen advancing into combat. The time, however, was not the 1960s; it was mid-1945 and World War II in the Pacific was drawing to a close. To speed the war’s conclusion, the United States needed the cooperation and assistance of those populations still under Japanese occupation. Even as the victorious allied powers discussed high policy for the region, often contentiously, action on the ground continued. Bombing Missions Over Laos From 1965-1973. Saigon Anniversary: How Young Vietnamese View the Vietnam War. Today, April 30, red flags are festooning the streets of Hanoi, the Vietnamese capital, to mark the fourth decade since the U.S. 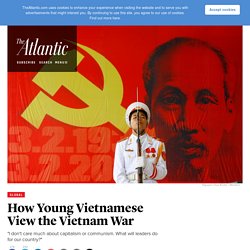 -backed South Vietnamese government surrendered to communist North Vietnamese troops and ended the Vietnam War. But most Vietnamese are too young to remember the day in 1975 when Saigon fell, celebrated in Hanoi as Reunification Day. For the nearly 70 percent of the population under age 40, April 30 is just a day off from work or school. On 10th Anniversary, 53% in U.S. See Iraq War as Mistake.

WASHINGTON, D.C. -- Ten years have passed since the United States and its allies invaded Iraq, and it appears the majority of Americans consider this a regrettable anniversary. 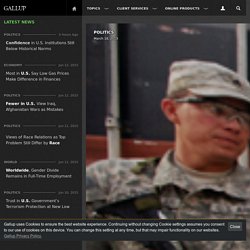 Fifty-three percent of Americans believe their country "made a mistake sending troops to fight in Iraq" and 42% say it was not a mistake. The March 7-10 results mark the first time Gallup has asked this question since the full withdrawal of American troops in December 2011. Although majorities or near-majorities have viewed the conflict as a mistake continuously since August 2005, the current 53% is down from the high point of 63% in April 2008. News Release. For Immediate Release: January 24, 2012 Further information: Rachel Flor (617) 514-1662, rachel.flor@jfklfoundation.org BOSTON– The John F. 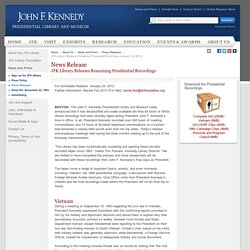 Kennedy Presidential Library and Museum today announced that it has declassified and made available the final 45 hours of White House recordings that were secretly taped during President John F. Kennedy’s time in office. In all, President Kennedy recorded over 248 hours of meeting conversations and 12 hours of dictabelt telephone conversations on a system that remained a closely held secret even from his top aides. Vietnam Scholars Group. Rel1_skunks_bogies. 1969 RALLY TO SUPPORT VIETNAM WAR POLICY. Letter from National Mobilization Committee to End the War in Vietnam, 08/01/1968. On 10th Anniversary, 53% in U.S. See Iraq War as Mistake. Online Databases. Finding Aids: Reference Information Paper 90 Table of Contents. Secret Cold War Documents Reveal NSA Spied on Senators …along with journalists, civil rights leaders, Muhammad Ali and a Washington Post humor columnist.

One of the NSA’s targets, Senator Frank Church. 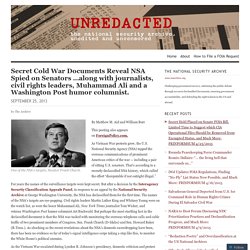 By Matthew M. Aid and William Burr This posting also appears on ForeignPolicy.com. May41970JASParticle.pdf. The Legacy of the Vietnam War, Noam Chomsky interviewed by Paul Shannon. "American imperialism has suffered a stunning defeat in Indochina. 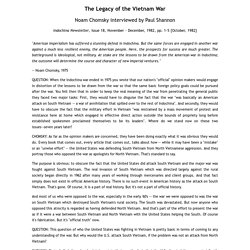 But the same forces are engaged In another war against a much less resilient enemy, the American people. Here, the prospects for success are much greater. The battleground is ideological, not military. What We Don’t Know About Vietnam Can Still Hurt Us. AS the war in Afghanistan drags on with no definitive victory in sight for the United States and American troops begin to withdraw, comparisons to the Vietnam War are once again in the air, 50 years after both Washington and Hanoi decided to beef up their forces in South Vietnam. 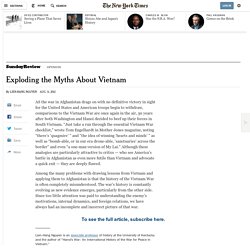 “Just take a run through the essential Vietnam War checklist,” wrote Tom Engelhardt in Mother Jones magazine, noting “there’s ‘quagmire’ ” and “the idea of winning ‘hearts and minds’ ” as well as “bomb-able, or in our era drone-able, ‘sanctuaries’ across the border” and even “a one-man version of My Lai.” Although these analogies are particularly attractive to critics — who see America’s battle in Afghanistan as even more futile than Vietnam and advocate a quick exit — they are deeply flawed. Americans Look Back at Vietnam War. Nras36_10_kuznick_peter_j.pdf. NSA spied on Martin Luther King, other Vietnam War critics. The National Security Agency eavesdropped on civil rights icon Martin Luther King Jr. and heavyweight boxer Muhammad Ali as well as other leading critics of the Vietnam War in a secret program later deemed "disreputable," declassified documents have revealed. 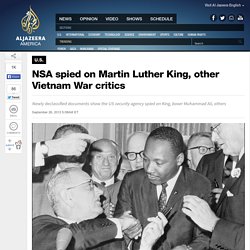 The six-year spying program, dubbed "Minaret," had been exposed in the 1970s but the targets of the surveillance were kept secret until now. The documents showed the NSA tracked King and his colleague Whitney Young, boxing star Muhammad Ali, journalists from The New York Times and The Washington Post, and two members of Congress, Sen. Kimball on Schmitz, 'Richard Nixon and the Vietnam War: The End of the American Century' 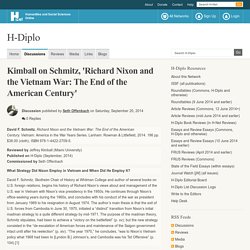 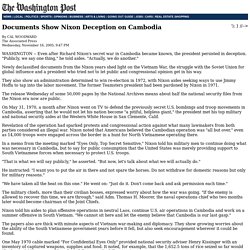 "Publicly, we say one thing," he told aides. "Actually, we do another. " Dalai Lama History - The US wanted to deploy the Dalai Lama in Vietnam. As is well documented elsewhere on this site, the Dalai Lama was on the CIA payroll from 1959 until at least 1974. He was provided with $180,000 per year as part of the US anti-communist propaganda efforts.

The six volumes of formerly secret histories (the Agency's belated response to a Freedom of Information Act (FOIA) request by National Security Archive senior fellow John Prados) document CIA activities in South and North Vietnam, Laos, and Cambodia in unprecedented detail. The histories contain a great deal of new material and shed light on aspects of the CIA's work that were not well known or were poorly understood. The new revelations include: The CIA and U.S. Embassy engaged in secret diplomatic exchanges with enemy insurgents of the National Liberation Front, at first with the approval of the South Vietnamese government, a channel which collapsed in the face of deliberate obstruction by South Vietnamese officials [Document 2 pp. 58-63].