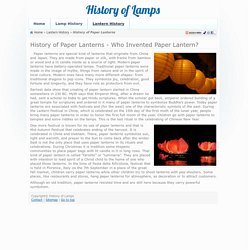 They are made from paper or silk, with frame from bamboo or wood and a lit candle inside as a source of light. Modern paper lanterns have battery-operated lamps. Traditional paper lanterns were made in the image of myths, things from nature and or in the spirit of local culture. Modern ones have many more different shapes: from traditional dragons to pop icons. They symbolize joy, celebration, good fortune and longevity, and they have role as protectors from evil. Earliest data show that creating of paper lantern started in China somewhere in 230 BC.

One more festival is known for its use of paper lanterns and that is Mid-Autumn Festival that celebrates ending of the harvest. Although an old tradition, paper lanterns resisted time and are still here because they carry powerful symbolism. Vietnamese Traditional Toys. Children learn by taking an imitation of whatever happens in the world around them. 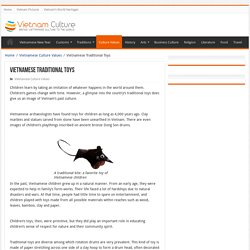 Children’s games change with time. However, a glimpse into the country’s traditional toys does give us an image of Vietnam’s past culture. Vietnamese archaeologists have found toys for children as long as 4,000 years ago. Clay marbles and statues carved from stone have been unearthed in Vietnam. There are even images of children’s playthings inscribed on ancient bronze Dong Son drums. Countries of the Francophone : The Research and Training Centre for Community Development, Hanoi, Vietnam. Paper Art: Landforms for Kids. Discover Vietnam and Make Vietnamese Bánh Mì (Sandwiches!) We’re starting this fall with a continuation of our wonderful series “Around the World in 12 Dishes.” 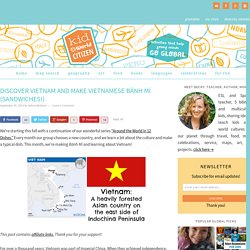 Every month our group chooses a new country, and we learn a bit about the culture and make a typical dish. This month, we’re making Bánh Mì and learning about Vietnam! This post contains affiliate links. Thank you for your support! Map of Vietnam, Vietnam Map. History of Vietnam Settlements in the region of the Red River Valley in Vietnam had already existed some 5000 years ago. 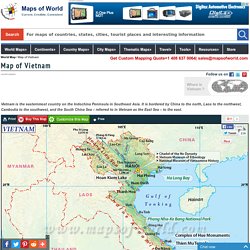 The entire region was ruled by China from 111 BC and ended in 938 AD when revolts toppled the Chinese ruling dynasty who ruled the land. China attempted to invade a number of times after the independence but was always met with resistance. In the 17th century, Vietnam was divided into two kingdoms, one ruled by the Nguyen dynasty and another by the Tay Son. In 1802, a French-backed Nguyen lord defeated the Tay Son, creating the single kingdom of Vietnam. In 1890, the region was invaded and conquered by France, becoming a French protectorate.

Vietnam was briefly conquered by Japan during the World War II and in 1945, Ho Chi Minh - the leader of the Vietnamese Communist Party, declared the country's independence. Cherry Blossom Art from a Recycled Soda Bottle. Pink blossoms will soon appear on trees, and the National Cherry Blossom Festival starts on March 20. 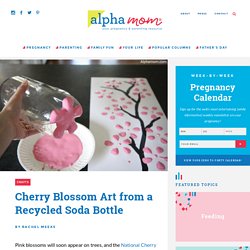 In 1912 the city of Tokyo, Japan, gave Washington, D.C., a beautiful gift of 3,000 cherry blossom trees. This year celebrates the 100th anniversary of that gift. Make cherry blossom artwork with a recycled 2-liter soda bottle as a stamp! Here are the detailed instructions. Start by using dark paint to paint a branch on poster board. I cut this piece of poster board in half lengthwise because I want it to look more like an art panel than a poster. Once the branch is painted, let it dry before continuing with the stamping. Now let’s do the stamping. Chinese New Year paper lantern - used red packets. Only stapler and scissors needed. Chinese New Years, New Year's and Chinese. Behance. / Made In Vietnam is a collective of shorts that depict the beauty of Vietnamese traditional crafting art applied in the contemporary context. / A…

This is a 11 minute video examining in depth how the North Vietnamese and the Vietcong exploited the United States through there unique fighting st… How to make Vietnamese Fresh Spring Roll (GOI CUON) The ImaginationBox Chinese New Year simple lantern art - make a beautiful fingerprint blossom lantern with this free template. Au.pinterest. Create Chinese paper lanterns.

Vietnamese Crafts for Children. With these Vietnamese crafts children can have fun and be creative while learning about Vietnam's culture. A hands on experience with these Vietnamese crafts is a simple way to introduce many cultural topics while instilling a sense of pride in Vietnamese heritage. For those seeking more craft ideas for home or groups, the Chao Ban Vietnam Adoption Newsletter provides a simple Vietnamese cultural craft in each issue for children. Make a Vietnamese Beaded Flag This is a fun Vietnamese culture project for children - create your own flag in beads. (Cindy Roberts) Vietnam: Educator's guide. This guide is designed to be used in conjunction with LEARN NC’s slideshows on Vietnam and Cambodia. 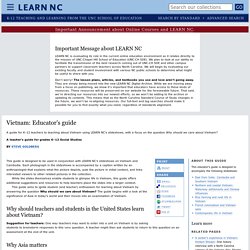 Each photograph in the slideshows is accompanied by a caption written by an anthropologist that explains what the picture depicts, puts the picture in initial context, and links interested viewers to other related pictures in the collection. While the slides themselves enable students to glimpse life in Vietnam, this guide offers additional suggestions and resources to help teachers place the slides into a larger context. This guide aims to ignite student (and teacher) enthusiasm for learning about Vietnam by answering the question Why should we care about Vietnam?