What different styles of head coverings say about Israeli Jewish men. What you wear can say a lot about who you are and what you believe. 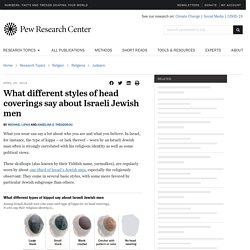 In Israel, for instance, the type of kippa – or lack thereof – worn by an Israeli Jewish man often is strongly correlated with his religious identity as well as some political views. These skullcaps (also known by their Yiddish name, yarmulkes), are regularly worn by about one-third of Israel’s Jewish men, especially the religiously observant. They come in several basic styles, with some more favored by particular Jewish subgroups than others. Among Israeli men who say they usually wear a large black fabric kippa, a majority identify as Haredi (also known as ultra-Orthodox) Jews (58%).

By contrast, most of those who wear a black crocheted or knitted kippa (59%) say they are Masorti (“traditional”) Jews. Meanwhile, among Israeli men who do not usually wear a head covering, 73% are Hiloni (“secular”) Jews, and about a quarter (27%) are Masorti (“traditional”). The "Amalekites" Are Alive and Well on Planet Earth Today! Deuteronomy 25:19, Blot out Amalek.The Hebrew name Amalek literally means “I am king.” 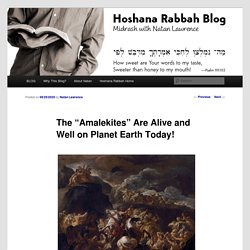 Remember how the people of Amalek attacked the children of Israel as they were coming out of Egypt (Exod 17:8)? These heathens attacked the weary, stragglers and weak Israelites who were falling behind in the rear ranks (Deut 25:18). For this evil deed, Elohim put a curse on them. What can we learn about Israel’s ancient enemies and it relates to us today? Who are the modern “Amalekites” and how can the saints defeat them? Urim and Thummim Definition and Meaning - Bible Dictionary. Urim and Thummim [N] [T] [S] The terms "Urim" and "Thummim" have traditionally been understood as "light(s)" and "perfection(s)" or as "perfect light. 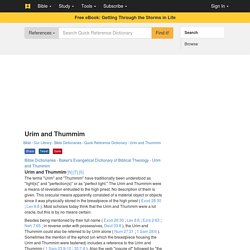 " The Urim and Thummim were a means of revelation entrusted to the high priest. No description of them is given. Urim and Thummin – Site Title. Biblical References. 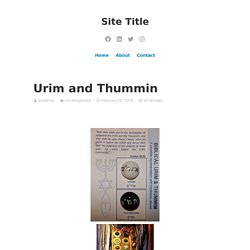 —Biblical Data:Objects connected with the breastplate of the high priest, and used as a kind of divine oracle. Since the days of the Alexandrian translators of the Old Testament it has been asserted that mean “revelation and truth” (δήλωσις καὶ ἀλήθεια), or “lights and perfections” (φωτισμοὶ καὶ τελεότητες); the τελειότης καὶ διδαχή of Symmachus (Jerome, “perfectio et doctrina”; Field, “Hexapla” on Deut. xxxiii. 8); and the φωτισμοί καὶ τελειώσεις of Aquila and Theodotion. The Vulgate has “doctrina [after Symmachus; Old Latin, “ostensio” or “demonstratio”] et veritas.” Chinese Occultism: Chinese Occultism: Urim and Thummim. Sacred Texts Confucianism Index Previous Next Buy this Book at Amazon.com Chinese Occultism, by Paul Carus, [1907], at sacred-texts.com The Chinese method of divination may help us to understand the Urim and Thummim of the Hebrews which are so ancient that details of their method are practically forgotten. 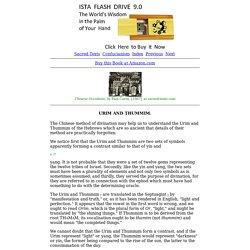 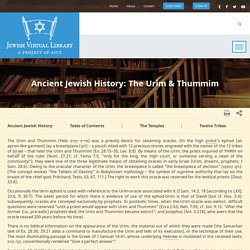 אוּרִים וְתֻמִּים) was a priestly device for obtaining oracles. On the high priest's ephod (an apron-like garment) lay a breastpiece (חֹשֶׁן) – a pouch inlaid with 12 precious stones engraved with the names of the 12 tribes of Israel – that held the Urim and Thummim (Ex. 28:15–30; Lev. 8:8). By means of the Urim, the priest inquired of YHWH on behalf of the ruler (Num. 27:21; cf. Atenism & Early Judaism. © Charles Chandler After the exile of the Amarna heretics, Atenism resurfaced in Judaism.1,2,3:31 So the obvious inference is that the exiles went to Canaan, where they started teaching a new faith to the Habirus. 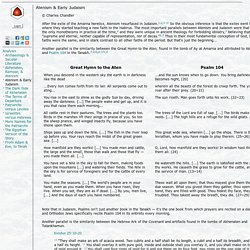 The most important parallels between Atenism and Judaism were that they were the only monotheisms in practice at the time,4 and they were unique in ancient theology for forbidding idolatry,5 believing that God is "supreme and eternal, neither capable of representation, nor of decay. "6:5 Thus in their most fundamental conception of God, the two faiths were the same, and in stark contrast to all other faiths of the period.

But that's just the beginning... Exodus 25:10-20 10 "They shall make an ark of acacia wood. Figure 1. Ark of Anubis, as found in Tut's tomb. References. The Talmud A Gateway to the Common Law.

Akedah. The Name of G-d. Please note: This page contains the Name of God. 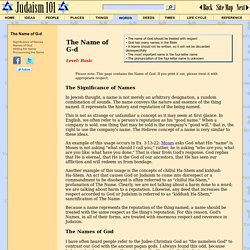 If you print it out, please treat it with appropriate respect. The Significance of Names In Jewish thought, a name is not merely an arbitrary designation, a random combination of sounds. The Way: Yahweh, The amalgamated Enlil and Enki. ‘The Way’ will reveal the major alterations made to the Bible, theological and historical coverups – all part of the Great Deception. 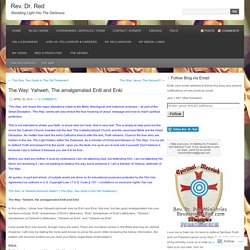 ‘The Way’ series will also reveal the true meaning of Jesus’ message and how to reach spiritual perfection. This is not intended to shake your faith, or prove God isn’t real. God is very real. This is simply to help point out the errors the Catholic Church inserted into the text. The institutionalized Church and the canonized Bible are the Great Deception.

Before you read any further, it must be understood I am not attacking God, but defending Him. All quotes, in part and whole, of outside works are done so for educational purposes protected by the Fair Use Agreement as outlined in U.S. The Tetragrammaton. Reprinted with permission from The Jewish Religion: A Companion, published by Oxford University Press. 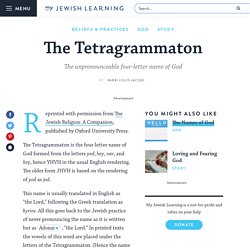 The Tetragrammaton is the four-letter name of God formed from the letters yod, hey, vav, and hey, hence YHVH in the usual English rendering. The older form JHVH is based on the rendering of yod as jod. This name is usually translated in English as "the Lord," following the Greek translation as kyrios. All this goes back to the Jewish practice of never pronouncing the name as it is written but as <audio src=" controls> Your browser does not support the <code>audio</code> element. Pronounced: ah-doe-NYE, Origin: Hebrew, a name for God. THE MEANING OF THE TETRAGRAMMATON. This is four Hebrew letters (Yod, He, Waw and He) called the "Tetragrammaton".

The four characters are the four Hebrew letters that correspond to YHWH and are transliterated IAUE or Yahweh. Yahweh is the name of the Almighty Father in Heaven that people commonly call "The LORD" or "God". Miscellaneous words and phrases. SEPHER YETZIRAH. (Translated from the Original Hebrew by William Wynn Westcott) The Sepher Yetzirah is one of the most famous of the ancient Qabalistic texts. It was first put into writing around 200 AD. Westcott's Translation of the Sepher Yetzirah was a primary source for the rituals and Knowledge Lectures of the Golden Dawn. This is the Third Edition of Westcott's translation, first published in 1887. The "Sepher Yetzirah," or "Book of Formation," is perhaps the oldest Rabbinical treatise of Kabalistic philosophy which is still extant.

Three important books of the "Zohar," or "Book of Splendor," which is a great storehouse of Kabalistic teaching, have been translated into English by S. Overview of Jewish Dietary Laws & Regulations. Kashrut is the body of Jewish law dealing with what foods can and cannot be eaten and how those foods must be prepared.

The word "Kashrut" comes from the Hebrew meaning fit, proper or correct. The word "kosher," which describes food that meets the standards of kashrut, is also often used to describe ritual objects that are made in accordance with Jewish law and are fit for ritual use. Food that is not kosher is referred to as treif (literally torn). Kosher is not a style of cooking and therefore there is no such thing as "kosher-style" food. Haredi: The Ultra orthodox society in Israel 1/5. The Talmud. Secret World of Hasidism. Masoretic Text. The Torah texts that we read today are believed by some to be the same as those given to Moses and the people of Israel by God.

Judaism is not Zionism. We would like to take a few minutes of your time to prevent you from making a terrible mistake that may have disastrous results for many. Hasidic Judaism - Ultra-Orthodox Jews - Hasidism. By Lisa Katz Hasidic Judaism is one movement within Haredi Judaism. Hasidic Jews are called Hasidim in Hebrew. Union hymnal : Central Conference of American Rabbis. Skip to main content. Theology: Judaism. History, Beliefs of Jewish Religion / Jews. Truth About The Star Of David, Who's Star Is This Really?

This reflects the fact that the Bible is actually a collection of individual books (such as Genesis, Exodus, Isaiah, Song of Songs, and many others). Similarly, another traditional name for the Torah, Humash (“of Five”), indicates that the Torah itself is a book composed of five books. Perhaps our conception of the Bible as one book is a result of our having one-volume printed Bibles; in ancient times, individual books were published in smaller scrolls; the word Bible, however, comes from the Greek ta biblia, which is plural and means books. Where did the Bible come from? Did you like this article? 11b Judaism: scriptures, Father Abraham - Tanakh, Torah, Mishnah, Talmud. DNA Science and the Jewish Bloodline ◕ Texe Marrs w/ Dr Deagle 1.22.14. What’s the difference between Talmud, Mishnah, and Torah? The Talmud and the New World Order. Are you Torah Jews or Talmudic Jews? Please help me. As a Christian, I support Israel, and I do defend the Jews.