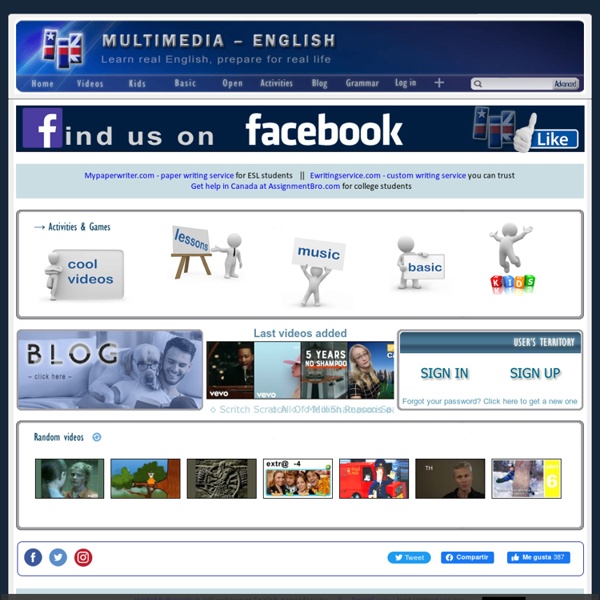 British Pathé Uploads Entire 85,000-Film Archive to YouTube in HD British Pathé, the U.K. newsreel archive company, has uploaded its entire 100-year collection of 85,000 historic films in high resolution to YouTube. The collection, which spans 1896 to 1976, comprises some 3,500 hours of historical footage of major events, notable figures, fashion, travel, sports and culture. It includes extensive film from both World War I and World War II. Learn English free with USA Learns! Learn English, anytime day or night. A site for adults to improve English speaking, pronunciation, listening, reading, spelling, writing and grammar. Start Now Inspiration/Kidspiration Assignment Page Inspiration™ or Kidspiration™ Inspiration is a visual thinking and learning tool that can be used for brainstorming, planning, and organizing information through the use of flowcharts, diagrams, outlines, concept maps, or mind maps. Inspiration (or Kidspiration for K-5 students) can be used across the curriculum in many ways to support learning. The following are some general examples of learning tools. For additional examples, see the Educator's section of the company's web site with searchable examples and lesson plans, or visit the Inspired Learning Community for cross-curricular integration ideas for K-12 classrooms. Assignment Create a tool to help students organize, share, prioritize, analyze or otherwise use information gathered within their individual roles of the WebQuest activity.

How can film help you teach or learn English? What can film and video add to the learning experience? Kieran Donaghy, who won the British Council’s TeachingEnglish blog award tells us why film is such a good resource and recommends some useful websites, in one of our top five articles of all time, illustrated by artist Jamie Johnson. Language teachers have been using films in their classes for decades, and there are a number of reasons why film is an excellent teaching and learning tool. Learning from films is motivating and enjoyable Motivation is one of the most important factors in determining successful second-language acquisition.

How to use songs in the English language classroom What makes for a successful song-based lesson? Adam Simpson, second-time winner of the British Council’s Teaching English blog award for his post on conditionals (written with Paul Mains), explains. One of the big problems we all face, whether teaching English to children or adults, is maintaining learners’ interest throughout our lessons.

Oscar Week Special: Seven Teaching Resources on Film Literacy The Academy Awards are just around the corner, and there are a number of nominated films that can be great teaching tools for educators this year. With the abundance of media messages in our society, it's important to ensure students are media literate. The Oscars provide a great opportunity to use the year's best films to teach students about media and film literacy. Not to mention, films can also be an engaging teaching tool for piquing interest in a variety of subjects and issues. In this compilation, you'll find classroom resources from around the web that cover many of this year's nominated films, as well as general resources for using film as a teaching tool.

English as a Second Language (ESL) Provide fun activities to help students study English vocabulary, writing and spelling. Improve pronunciation and comprehension. Improve students' academic English as well as their social English. Make decisions on instruction based on individual student data. ESL teachers help their students to develop proficiency in all aspects of their English language use at one time, a huge task. These students do not have the luxury of having heard and spoken the language for years before they must read and write it.

Teaching ESL with the Internet We've created this page to provide resources, lessons, and ideas on teaching with the Internet. The printable activities for classroom use come in two main lesson formats: scavenger hunts and Internet worksheets. We also have several discussion forums where you can share your ideas and links to other web sites about the Internet. What’s on your mind? This EFL lesson is designed around a short film by Shaun Higton and the theme of Facebook. Students practise vocabulary related to social media, watch a short film, and talk about Facebook. Step 1

Activities Another guest post from Lee Shutler. Until recently Lee has been working as an Academic Manager for the BC in . He is now teaching in East Kent in the and co-authoring on a Middle School textbook for the German market. In a teaching generation so-called drilling seems to have shifted in its position on the EFL agenda.