How can film help you teach or learn English? 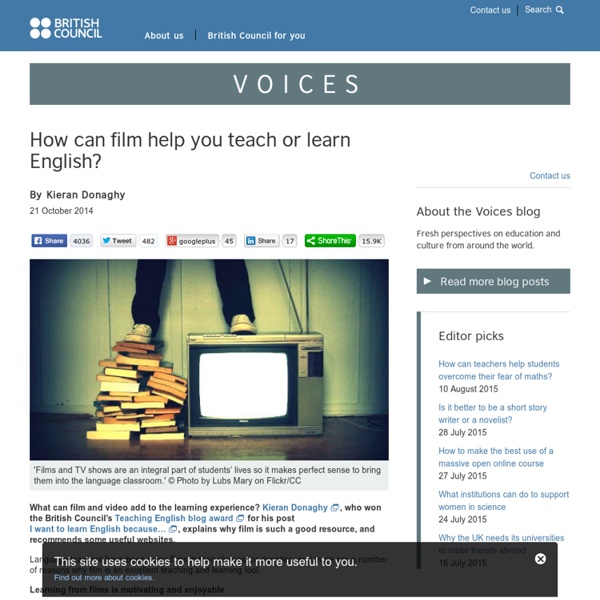 What can film and video add to the learning experience? Kieran Donaghy Opens in a new tab or window., who won the British Council’s Teaching English blog award Opens in a new tab or window. for his post I want to learn English because… Opens in a new tab or window., explains why film is such a good resource, and recommends some useful websites. Language teachers have been using films in their classes for decades, and there are a number of reasons why film is an excellent teaching and learning tool. Learning from films is motivating and enjoyable Motivation is one of the most important factors in determining successful second-language acquisition. Films and TV shows are an integral part of students’ lives so it makes perfect sense to bring them into the language classroom. Film provides authentic and varied language Another benefit of using film is that it provides a source of authentic and varied language. Film gives a visual context Variety and flexibility Lesson plans Film guides Short films

Improve Your English by Watching Friends – 3 Steps on How to Actively Watch TV Shows I am delighted to introduce you to Paul Mains who has written this post. Paul approached me a couple of weeks ago offering to write a piece for my blog. He offered me a choice of topics and I was immediately drawn to the above topic. Many learners watch films and follow TV series in English.

List of videolessons from the English learning series EXTR@ ENGLISH - in Mult... A cool TV series, a funny sitcom, and an English course, all wrapped in one single package to make Extr@, the perfect way of learning natural English having fun.SEE THE OTHER EPISODES HERE !Do extr@ activities hereAnnie and Bridget share a flat. Their next-door neighbour Nick is a disorganized, humorous macho fellow. Bridget's Argentinean penpal, Hector, comes to London to visit her. His limited command of English serves as the central dynamic for the language learning content of the series. The Reader This EFL lesson plan is designed around a moving short film commissioned by Bells and directed by Greg Gray. In the lesson students write a narrative, watch a short film and discuss literacy strategies. I would ask all teachers who use Film English to consider buying my book Film in Action as the royalties which I receive from sales help to keep the website completely free. Language level: Intermediate (B1) – Upper Intermediate (B2) Learner type: All ages

British Pathé Uploads Entire 85,000-Film Archive to YouTube in HD British Pathé, the U.K. newsreel archive company, has uploaded its entire 100-year collection of 85,000 historic films in high resolution to YouTube. The collection, which spans 1896 to 1976, comprises some 3,500 hours of historical footage of major events, notable figures, fashion, travel, sports and culture. It includes extensive film from both World War I and World War II. “Our hope is that everyone, everywhere who has a computer will see these films and enjoy them,” British Pathé GM Alastair White said in a statement. “This archive is a treasure trove unrivaled in historical and cultural significance that should never be forgotten.

Selfie This EFL lesson plan is designed around a short film by Matthew Frost starring Kirsten Dunst, and the theme of celebrity selfies. Students discuss meeting famous people, roleplay meeting their hero or heroine, watch a short film and discuss selfies and celebrity selfies. I would ask all teachers who use Film English to consider buying my book Film in Action as the royalties which I receive from sales help to keep the website completely free. The Giving Tree (Shel Silverstein) –[Multimedia-English videos] A story about unconditional love. Read from the original book by Shel Silverstein. THE BOY WOULD COME= The boy used to come. USED TO can express a habit or a state (a situation), but WOULD can only express a habit- I used to get up at 8 o’clock, but now I get up later = I would get up at 8 o’clock, but now I get up later.- That house used to look very old, but now they have repaired it. (a state.

Oscar Week Special: Seven Teaching Resources on Film Literacy The Academy Awards are just around the corner, and there are a number of nominated films that can be great teaching tools for educators this year. With the abundance of media messages in our society, it's important to ensure students are media literate. The Oscars provide a great opportunity to use the year's best films to teach students about media and film literacy. Using Silent Video in the EFL Classroom This video is the BOMB! It is captivating, absorbing, a story par excellence but also SILENT! Yes, silent films are great for getting students to produce language — and after all is said and done, that most often is the hardest thing to do, getting the students speaking and learning language by just communicating. That is our job, to get the students so absorbed in the communicative act that they forget they are learning.

Why You Should Learn English with TV Series For the majority of exceptionally fluent English speakers I meet, the most fun, enriching, and effective way to learn English is through watching TV series. In fact, it’s surprisingly common to hear that people learn significantly more English from TV, movies, and videos than all traditional methods combined (For example: English courses, textbooks, and even study abroad experiences). So why is this the case? Why is it so hard for English schools to consistently deliver on their promises, and why is it that the most fluent English learners in the world are benefiting much more from English speaking TV series, a media that was not intended to teach English?

Vidéos mises en ligne de The CGBros Upload TheCGBros.com Subscription preferences Loading... Working... The CGBros 50 ways to use video in the classroom – EFL CLASSROOM 2.0 I will be travelling quite a bit this year to conferences and schools, speaking about a lifelong teaching passion - the use of video as an educational material. It is something I've promoted and developed many language learning ideas around - foremost through my work on EnglishCentral. So enjoy these practical ideas for using this most "real" material with your students, Each idea has a recommended example - just click "View It". Also get this as a lecture presentation with examples HERE. Get all the 50 lists HERE. 50 Ways To Use Video In The Classroom

Your Secret This EFL lesson is based around a short film called Your Secret. What I like most about the film is that it involves the viewers and encourages them to take an active and creative part. I would ask all teachers who use Film English to consider buying my book Film in Action as the royalties which I receive from sales help to keep the website completely free. Language level: Pre-intermediate (A2) – Intermediate (B1) Learner type:Teens and adults