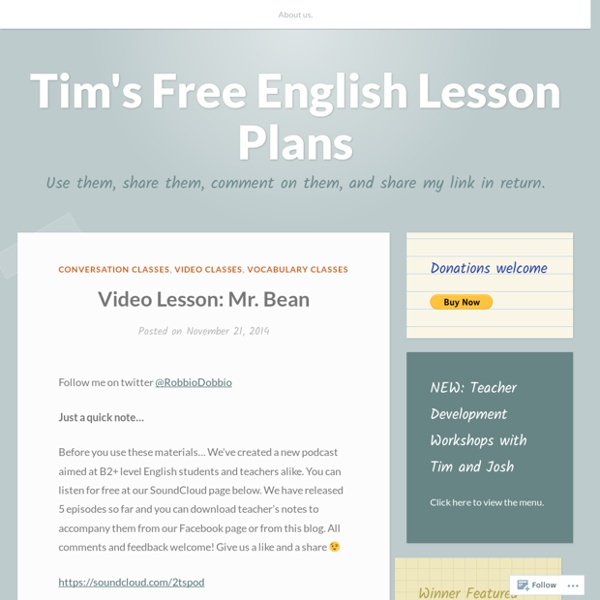 Follow me on twitter Just a quick note… Before you use these materials… We’ve created a new podcast aimed at B2+ level English students and teachers alike. You can listen for free at our SoundCloud page below. We have released 5 episodes so far and you can download teacher’s notes to accompany them from our Facebook page or from this blog. All comments and feedback welcome! This is a video lesson based around the video “Mr. Kids and lower levels The aim of this lesson plan is to practice holiday vocabulary (clothes and items that go in a suitcase) and some basic grammar structure. Project a picture of a suitcase on to the board (or draw one) and ask “What do you put in your suitcase when you go on holiday?” toothbrushtoothpasteswimming shorts/trunkstowelunderpantscan of baked beanscloth/flannelsoapbooksuitcasetrousersshortsshoesteddy bearscissors You could also use this quizlet set to go over clothes vocabulary. Mr. in his suitcase. Higher levels – video dictations Objects: Verbs: Like this:

List of videolessons from the English learning series EXTR@ ENGLISH - in Mult... A cool TV series, a funny sitcom, and an English course, all wrapped in one single package to make Extr@, the perfect way of learning natural English having fun.SEE THE OTHER EPISODES HERE !Do extr@ activities hereAnnie and Bridget share a flat. Their next-door neighbour Nick is a disorganized, humorous macho fellow. Bridget's Argentinean penpal, Hector, comes to London to visit her. His limited command of English serves as the central dynamic for the language learning content of the series. His trying to get to grips with the daily English is highly amusing (and enlightening).You do not need a tutor. 66 Facts You May Not Have Known About The English Language The English language is, quite literally, the greatest language in the world. Great in terms of size - the current edition of the Oxford English Dictionary contains 615,000 entries. Great in terms of scope — it’s an official language in seventy-nine countries and territories. And great in terms of, well, greatness — it’s just one fantastic mishmash of borrowings, inventions, corruptions, misinterpretations, misspellings, alterations, words you’ll never need, and words you never even knew you’ll never need. Since December 2013, @HaggardHawks has been trying to prove precisely this by tweeting odd words, word origins and language facts everyday. 1,300 tweets later, it turns six months old this week and so to celebrate, here are 66 random facts from our first semester that hopefully go some way towards showing how great — and how downright bizarre — the English language can be.

How can film help you teach or learn English? What can film and video add to the learning experience? Kieran Donaghy Opens in a new tab or window., who won the British Council’s Teaching English blog award Opens in a new tab or window. for his post I want to learn English because… Opens in a new tab or window., explains why film is such a good resource, and recommends some useful websites. Language teachers have been using films in their classes for decades, and there are a number of reasons why film is an excellent teaching and learning tool. Learning from films is motivating and enjoyable Motivation is one of the most important factors in determining successful second-language acquisition. Films and TV shows are an integral part of students’ lives so it makes perfect sense to bring them into the language classroom.

How to Play the Game of Taboo: 13 Steps Edit Article Three Parts:Starting the GamePlaying Each RoundGaining an Edge on Your OpponentsCommunity Q&A Taboo is a classic card game, released by Hasbro in 1989. British Pathé Uploads Entire 85,000-Film Archive to YouTube in HD British Pathé, the U.K. newsreel archive company, has uploaded its entire 100-year collection of 85,000 historic films in high resolution to YouTube. The collection, which spans 1896 to 1976, comprises some 3,500 hours of historical footage of major events, notable figures, fashion, travel, sports and culture. It includes extensive film from both World War I and World War II. “Our hope is that everyone, everywhere who has a computer will see these films and enjoy them,” British Pathé GM Alastair White said in a statement. “This archive is a treasure trove unrivaled in historical and cultural significance that should never be forgotten. Uploading the films to YouTube seemed like the best way to make sure of that.”

Six low-preparation vocabulary activities for the English classroom Cristina Cabal, winner of the British Council's TeachingEnglish blog award, has new and improved games for revising English words. Turning passive vocabulary (the words you know) into active vocabulary (the words you use) is one of my main concerns when teaching. To do this, I keep three key words in mind – internalise, retain and retrieve. Learners need to first learn the new language, then feel confident using the new structure, expression or word. Oscar Week Special: Seven Teaching Resources on Film Literacy The Academy Awards are just around the corner, and there are a number of nominated films that can be great teaching tools for educators this year. With the abundance of media messages in our society, it's important to ensure students are media literate. The Oscars provide a great opportunity to use the year's best films to teach students about media and film literacy. Not to mention, films can also be an engaging teaching tool for piquing interest in a variety of subjects and issues.

Say the Same Thing – TeachingGamesEFL.com – by Mike Astbury I first saw this video last year, but I was reminded of it at the weekend thanks to Lisko MacMillan who used it as part of her excellent session at the Teacher Training day in Torun. Watch the first minute or so to see the game in action: There’s not much to it: 625 Free Movies Online: Great Classics, Indies, Noir, Westerns & More Watch 4,000+ movies free online. Includes classics, indies, film noir, documentaries and other films, created by some of our greatest actors, actresses and directors. The collection is divided into the following categories: Comedy & Drama; Film Noir, Horror & Hitchcock; Westerns (many with John Wayne); Martial Arts Movies; Silent Films; Documentaries, and Animation. Free Comedy & Dramas 125 Korean Feature Films – Free – The Korean Film Archive has put on YouTube over 100 Korean feature films, including Im Kwon-taek’s Sopyonje and Hong Sangsoo’s The Day the Pig Fell Into a Well.

mELTing Activities, Lessons and Ideas: Multiple Meanings of a Words My friend is small. What do I mean by that? Is she skinny? Is she a midget? Your Secret This EFL lesson is based around a short film called Your Secret. What I like most about the film is that it involves the viewers and encourages them to take an active and creative part. I would ask all teachers who use Film English to consider buying my book Film in Action as the royalties which I receive from sales help to keep the website completely free. Language level: Pre-intermediate (A2) – Intermediate (B1) Learner type:Teens and adults Time: 60 minutes