Deep change in tech and economy

Beyond finance edition. To Make Computers Useful, You Have To Fire People. The $100bn Facebook question: Will capitalism survive 'value abundance'? Newspapers: It’s not a revenue problem, it’s a culture problem. The Nature Of The Firm and Work Markets. Those who watched the video I posted on Sunday saw me talking about this. 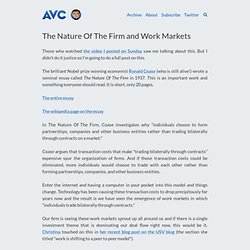 But I didn't do it justice so I'm going to do a full post on this. Analysis: Euro zone strugglers lack innovative knack. WEF. Business cycles: Lessons of the 1930s. The Book of Jobs. What this transition meant, however, is that jobs and livelihoods on the farm were being destroyed. 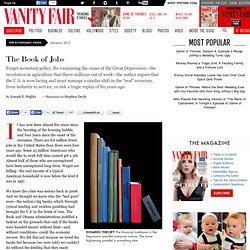 Because of accelerating productivity, output was increasing faster than demand, and prices fell sharply. It was this, more than anything else, that led to rapidly declining incomes. Farmers then (like workers now) borrowed heavily to sustain living standards and production. Because neither the farmers nor their bankers anticipated the steepness of the price declines, a credit crunch quickly ensued. Farmers simply couldn’t pay back what they owed. Niall Ferguson: The 6 killer apps of prosperity. How Technology is Recreating the 21st-century Economy. W. 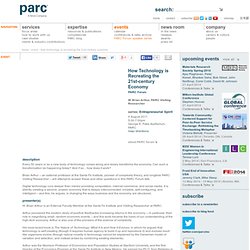 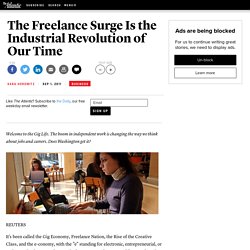 The boom in independent work is changing the way we think about jobs and careers. Does Washington get it? It's been called the Gig Economy, Freelance Nation, the Rise of the Creative Class, and the e-conomy, with the "e" standing for electronic, entrepreneurial, or perhaps eclectic. Everywhere we look, we can see the U.S. workforce undergoing a massive change. No longer do we work at the same company for 25 years, waiting for the gold watch, expecting the benefits and security that come with full-time employment. Today, careers consist of piecing together various types of work, juggling multiple clients, learning to be marketing and accounting experts, and creating offices in bedrooms/coffee shops/coworking spaces.

The Local-global Flip, Or, "the Lanier Effect" Here's a sampling: ... 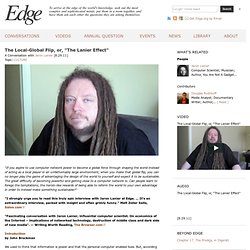 "The Apple idea is that instead of the personal computer model where people own their own information, and everybody can be a creator as well as a consumer, we're moving towards this iPad, iPhone model where it's not as adequate for media creation as the real media creation tools, and even though you can become a seller over the network, you have to pass through Apple's gate to accept what you do, and your chances of doing well are very small, and it's not a person to person thing, it's a business through a hub, through Apple to others, and it doesn't create a middle class, it creates a new kind of upper class. ...

Global Rebellion: The Coming Chaos. *Well, I’m pretty used to seeing overheated essays of this kind, even from Californian university professors; but I’m sure not used to seeing ‘em on Al Jazeera. 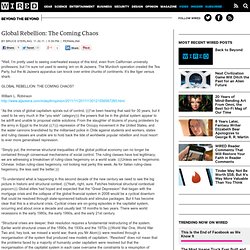 The Murdoch operation created the Tea Party, but the Al Jazeera apparatus can knock over entire chunks of continents. It’s like tiger versus shark. GLOBAL REBELLION: THE COMING CHAOS? Komt er een einde aan de welvaartsgroei? Men, women – and machines. The rise of interconnected digital machines is threatening to change our economy in profound ways This month, we enter the season of Goodwill to All Men (and Women). 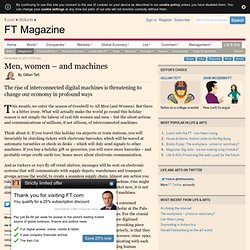 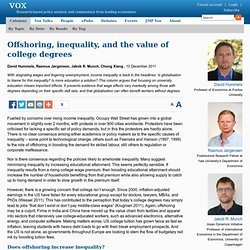 Munch, Chong Xiang , 10 December 2011 Fuelled by concerns over rising income inequality, Occupy Wall Street has grown into a global movement in slightly over 2 months, with protests in over 900 cities worldwide. Teachers Don’t Like Creative Students. One of the most consistent findings in educational studies of creativity has been that teachers dislike personality traits associated with creativity. 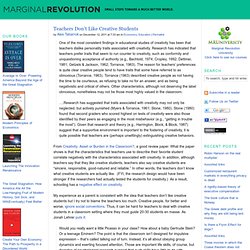 Research has indicated that teachers prefer traits that seem to run counter to creativity, such as conformity and unquestioning acceptance of authority (e.g., Bachtold, 1974; Cropley, 1992; Dettmer, 1981; Getzels & Jackson, 1962; Torrance, 1963). The reason for teachers’ preferences is quite clear creative people tend to have traits that some have referred to as obnoxious (Torrance, 1963). Review: The Spirit Level by Richard Wilkinson and Kate Pickett. We are rich enough. 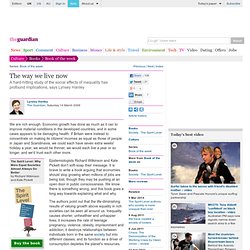 Economic growth has done as much as it can to improve material conditions in the developed countries, and in some cases appears to be damaging health. If Britain were instead to concentrate on making its citizens' incomes as equal as those of people in Japan and Scandinavia, we could each have seven extra weeks' holiday a year, we would be thinner, we would each live a year or so longer, and we'd trust each other more.

The Spirit Level : Why More Equal Societies Almost Always Do Better by Richard Wilkinson and Kate Pickett Epidemiologists Richard Wilkinson and Kate Pickett don't soft-soap their message. België ontsnapt aan toename ongelijkheid. Tim Harford — Adapt. When faced with complex problems, we have all become accustomed to looking to our leaders to set out a grand vision, experts to draw up a detailed plan of action, or gurus who can provide us with some infallible solution. In this groundbreaking book, Tim Harford shows us a new and inspiring approach to solving the most pressing problems in our lives. Harford argues that today’s challenges simply cannot be tackled with ready-made solutions and expert opinions; the world has become far too unpredictable and profoundly complex.

Instead, we must adapt—improvise rather than plan, work from the bottom up rather than the top down, and take baby steps rather than great leaps forward. Innovation Starvation. The British 1 Percent.

The Rise of the New Global Elite - Magazine. F. American plutocracy. Michael Lewis puts his finger on something important: The Undeserving One Percent? - Raghuram Rajan. Exit from comment view mode. Click to hide this space CHICAGO – It is amazing how the “one percent” epithet, a reference to the top 1% of earners, has caught on in the United States and elsewhere in the developed world. In the United States, this 1% includes all those with a 2006 household income of at least $386,000. In the popular narrative, the 1% is thickly populated with unscrupulous corporate titans, greedy bankers, and insider-trading hedge-fund managers. Reading some progressive economists, it might seem that the answer to all of America’s current problems is to tax the 1% and redistribute to everyone else. Life in Europe's squeezed middle. Germany pessimistic about future.

7 November 2011Last updated at 11:38 By Stephen Evans BBC News, Berlin Many middle class Germans are seeing their pay frozen or cut while the cost of living continues to rise. The Global Hollowing Out of the Middle Class (No, It's Not Just the U.S.) - Derek Thompson - Business. Some consider the erosion of the middle class an American phenomenon driven by greedy capitalists at the top or an especially impotent education system at the bottom. This thing is global. Is het kapitalisme verdoemd? 'We zitten in een twilightzone tussen oud en nieuw' American Middle Class Dwindles As Household Income Drops To 1996 Levels. Though the middle class isn't dead yet, at least a tombstone has been picked out.

12 Themes for 2012: what we can expect in the year ahead. The Job is Dying – The Need for a New Way to Make a Living. Layoffs are taking place all over Canada. Even once safe government jobs are safe no longer. For those under 25, the chance of getting a job at the foot of a career ladder is slim. If you are over 50 and get laid off, your chance of getting another permanent job is remote. The Big Data Boom Is the Innovation Story of Our Time - Atlantic Mobile. The data revolution has turned customers into unwitting business consultants, as our purchases and searches are tracked to improve everything from websites to delivery routes. Twenty Years Fore & Aft. Andy Stern: China's Superior Economic Model. Finance. Don Sull, Strategy through turbulence - McKinsey Quarterly - Strategy - Strategic Thinking. Cooperation. 5 ideeën van Pattie Maes.

Een gps in ons hoofd. Why Artifical Intelligence Is Closer Than We Realize. Internettrends 2011 Meeker. Race Against the Machine. Here Comes the Sun. Who doesn't like solar energy? :