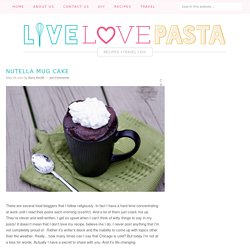 In fact I have a hard time concentrating at work until I read their posts each morning (ssshh!). And a lot of them just crack me up. They’re clever and well-written. Simple Tiramisu. For a lazy summer afternoon, tiramisu is the perfect pick-me-up. 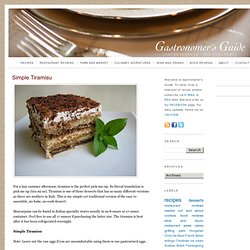 Its literal translation is pick me up (tira mi su). Tiramisu is one of those desserts that has as many different versions as there are mothers in Italy. This is my simple yet traditional version of the easy to assemble, no-bake, no-cook dessert. Mascarpone can be found in Italian specialty stores usually in an 8-ounce or 17-ounce container.

Feel free to use all 17 ounces if purchasing the latter size. Note: Leave out the raw eggs if you are uncomfortable using them or use pasteurized eggs. Black Magic Cake with Whipped Dark Chocolate Ganache. Well...i can now cross the important DOUBLE LAYER CAKE off of my "bucket list". believe it or not...i have never made a double layer cake from scratch. i HAVE, of course, made a box cake or two back in the high school days, but fear of the ugly dry crumbly lopsided cake syndrome must have kept me from trying again. on so many levels... pardon the poor pun ! 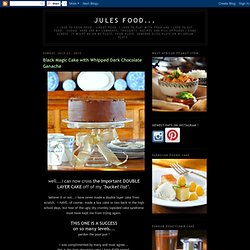 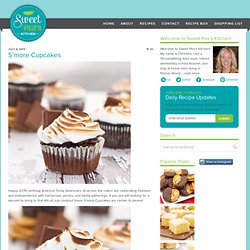 Today Americans all across the nation are celebrating freedom and independence with barbecues, picnics, and family gatherings. If you are still looking for a dessert to bring to that 4th of July cookout these S’more Cupcakes are certain to please! Tort Tuxedo. Scroll down for English version or select your language from the right! 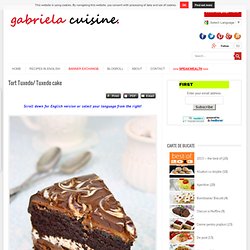 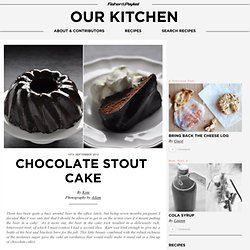 As it turns out, the beer in the cake trick resulted in a deliciously rich, bittersweet treat, of which I must confess I had a second slice. Kurt was kind enough to give me a bottle of his best and blackest brew for the job. This little beauty combined with the robust richness of the molasses sugar gave the cake an earthiness that would really make it stand out in a line up of chocolate cakes. Serves 12 -- 250g unsalted butter 2 1/2 cups flour ¼ cup dutch press cocoa (plus extra for the pan) 3/4 tsp baking soda 1/2 tsp salt 3/4 cup stout beer 350g dark chocolate, chopped 3 eggs 1 cup sugar 1 cup molasses sugar 1/2 cup sour cream 1/2 cup cream -- 1. Ferrero Rocher Cupcakes. Kimberly of Kimberly C Baking emailed me about the idea of a Ferrero Rocher cupcake. 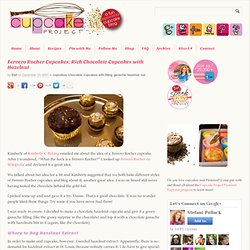 After I wondered, “What the heck is a Ferrero Rocher?” I looked up Ferrero Rocher on Wikipedia and declared it a great idea. We talked about her idea for a bit and Kimberly suggested that we both bake different styles of Ferrero Rocher cupcakes and blog about it; another great idea. I was on board still never having tasted the chocolate behind the gold foil. Dirty Girl Scout Cupcakes. Triple Chocolate Cheesecake. Polka dot cheesecake. I saw someone wearing the greatest polka dot rain coat today and it inspired me to make this cheesecake. 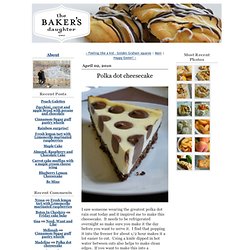 It needs to be refrigerated overnight so make sure you make it the day before you want to serve it. I find that popping it into the freezer for about 1/2 hour makes it a lot easier to cut. Using a knife dipped in hot water between cuts also helps to make clean edges. If you want to make this into a traditional cheesecake you will need an 8 inch spring form pan. Tiramisu Cheesecake. 3/4 cup(s) triple-strength coffee (reserve 2 Tbsp) 2 tablespoon(s) plus 1 1/4 cups sugar 1 tablespoon(s) Kahlúa (coffee-flavor liqueur) 1 1/2 package(s) (7 oz each) imported Italian savoiardi ladyfingers (see Note) 3 bricks (8 oz each) 1⁄3-less-fat cream cheese (Neufchâtel), softened 1 tablespoon(s) cornstarch 3 large eggs, at room temperature 1 tub(s) (8 or 8.75 oz) mascarpone cheese 1 ounce(s) bittersweet chocolate, grated Garnish: unsweetened cocoa powder and chocolate curls (directions follow) Remove bottom of a 9 x 3-in. springform pan; wrap bottom with plastic wrap. 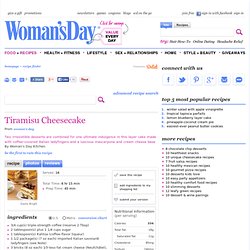 Stir coffee, 2 Tbsp sugar and the Kahlúa in a shallow bowl until sugar dissolves. Set 1⁄2 the ladyfingers aside. For each of remaining ladyfingers, quickly dip one side into coffee mixture and place wet side up on pan bottom to cover, cutting ladyfingers as needed to fit. Freeze about 15 minutes until firm. Here are some alternate versions of this recipe created by our wonderful community of chefs! Cappuccino fudge cheesecake. Given that it is but two days after one of the most indulgent meals of the year, I suspect the last thing you want to hear about is the most indulgent cake I have ever made, and yet, given the quality of the last two vegetable-focused, lighter dishes I have made — both of which I’d give a resounding “eh” — trust me, what I’ve got going on here is much more worthy of your attention, and your table at some distant dinner party. 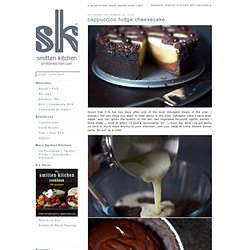 So pull up a chair. Because this cake is ridiculous, ridiculous bordering on obscene, so obscene that even a wee sliver of it takes an eating intermission mid-slice just to get through. Perhaps you’ll go get yourself a glass of water, do some stretches or deep yogic breathing, but I guarantee that you’ll do whatever it takes to psych you up enough to take on the second half. Because did I mention the part where this cake is ridiculous? Let’s start from the bottom. From there, a normal cheesecake would delve into the, you know, cheesecake layer. Guinness Chocolate Cheesecake. St. Patrick's day is coming up and this weekend I started working on my meal plan. Normally I do not start with the dessert but when I came across this recipe for a Guinness chocolate cheesecake I knew that I would be making it immediately. Last year I made a Guinness chocolate cake and I discovered that the combination of Guinness and chocolate is a wonderful one and I could not resist using it in one of my favourite treats, a cheesecake!

I don’t know if the universe has it out for me or what, but I swear to you all, the second I start making a conscious effort to eat healthy, I’m suddenly inspired to make all sorts of naughty treats. Chocolate Chip Oatmeal Cupcakes with Cinnamon Sugared Chip Frosting. Cake fo’ life. Red Velvet Cake. Hey! Lookin’ a little different ’round here! I am still working out some kinks and trying to get the blog more organized, but a HUGE thanks goes out to Seth from Boy Meets Food for jazzing my site up. I know you must be thinking… ‘another boring red velvet cake recipe?’

Cinnamon Roll Cake. You all know that I love breakfast foods. Maybe it’s because I don’t really cook breakfast that often. My husband sometimes cooks breakfast stuff on the weekends. We usually just eat cereal in the morning. The other night we had French toast with Portuguese sausage for dinner. The Most Amazing Chocolate Cake… Ever! Jar Cake. Tuesday is my thirty-something birthday and I wanted to make something fun for myself.

A little happiness in a jar for my happy day please! These are great because I know that in no way during the week could I make a cake for myself. I can just put the lid on these beauties and store in the fridge until my day. Red wine chocolate cake. Saturday night, New York City was the loudest I’d heard it in a long time. I should preface this by saying that I live in a noisy part of an already noisy neighborhood and under the best of circumstances — NYU students gone for the summer, long holiday weekend, rain — there’s always a Saturday night ruckus.

But this was something else. Ice Cream Cone Cupcakes. Andes Mint Cupcakes. New photo from my cookbook “Your Cup of Cake” I was introduced to Andes Mints at a very young age. Though, my strongest memory was not of eating them, it was of being attacked by them. My family commonly went to a little Mexican restaurant in town, and when we finished eating we would get these mints with the check. My two older brothers would make a sort of blow dart from the wrapper, and choose their target. Apple Shaped Cupcakes. It’s September, so apples are on the brain, can you tell? With apple cards, candy apples, yarn apples, I can’t seem to get enough. Well, as I was browsing Pinterest, which I’m addicted to, I came across this post from Muses of Megret on baking your cupcakes into Valentine hearts. Rubik's Battenburg Cake. Tiramisu Cupcakes.