In the UK. FREQUENTLY ASKED QUESTIONS ABOUT CROWS. Note: Most of these answers pertain to the American Crow, Corvus brachyrhynchos. 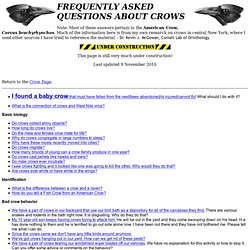 Much of the information here is from my own research on crows in central New York; where I used other sources I have tried to reference the material. - Dr. Kevin J. McGowan, Cornell Lab of Ornithology. What is the connection of crows and West Nile virus? Basic biology Identification Bad crow behavior People and crows. How owls swivel their heads. 1 February 2013Last updated at 03:19 ET By Jonathan Amos Science correspondent, BBC News An owl demonstrates an 270-degree turn (Video by JHU) It's the owl's greatest trick - turning its head almost a full circle. 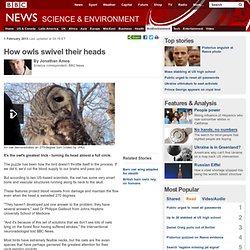 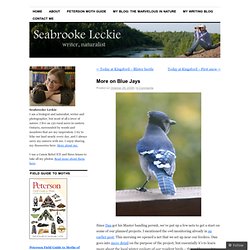 I mentioned the owl monitoring already in an earlier post. This morning we opened a net that we set up near our feeders. Dan goes into more detail on the purpose of the project, but essentially it’s to learn more about the local winter ecology of our resident birds – things like population sizes and demographics, survivorship over the winter, and general health of individuals (hopefully if we’re supplementing their diet with feed they’ll all be in good health, but it may lend some insight into the food resource abundance outside of the feeders). There’s a lot of information that’s either extremely difficult or impossible to obtain without using banding studies. Two such pieces of info were evident from our efforts this morning. The second thing we learned is that there’s an unusual proportion of adults to young birds among them. Nicobar Pigeon. Avitron, l'oiseau bionique radiocommandé. Bowerbird nest. Www.lab.fws.gov/idnotes/WingFeathers-prnt.pdf.

IMG_10371.jpg (545×800) Neognathae. Neoaves is a clade that consists of all modern birds (Neornithes or Aves) with the exception of Paleognathae (ratites and kin) and Galloanserae (ducks, chickens and kin). 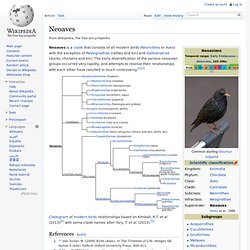 The early diversification of the various neoavian groups occurred very rapidly, and attempts to resolve their relationships with each other have resulted in much controversy.[2][3] Cladogram of modern birds relationships based on Kimball, R.T. et al. (2013)[4] with some clade names after Yury, T. et al. (2013).[5] Treepie. The treepies comprise four closely related genera (Dendrocitta, Crypsirina, Temnurus and Platysmurus) of long-tailed passerine birds in the family Corvidae. 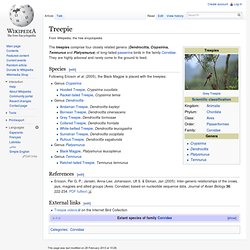 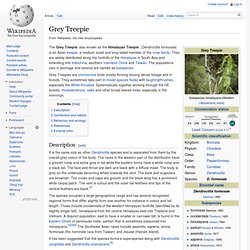 They sometimes take part in mixed species flocks with laughingthrushes, especially the White-throated. Systematically together working through the hill forests, rhododendrons, oaks and other broad leaved trees, especially in the mornings. Description[edit] BIRDS of PREY. Common Emerald Dove. The Common Emerald Dove (Chalcophaps indica) is a pigeon which is a widespread resident breeding bird in the tropical and sub-tropical parts of the Indian Subcontinent and east through Myanmar, Thailand, Malaysia and Indonesia, to northern and eastern Australia. 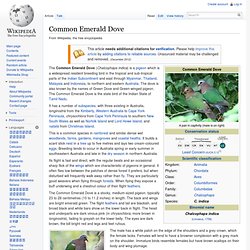 The dove is also known by the names of Green Dove and Green-winged pigeon. The Common Emerald Dove is the state bird of the Indian State of Tamil Nadu. It has a number of subspecies, with three existing in Australia, longirostris from the Kimberly, Western Australia to Cape York Peninsula, chrysochlora from Cape York Peninsula to southern New South Wales as well as Norfolk Island and Lord Howe Island, and natalis from Christmas Island. Its flight is fast and direct, with the regular beats and an occasional sharp flick of the wings which are characteristic of pigeons in general. It often flies low between the patches of dense forest it prefers, but when disturbed will frequently walk away rather than fly. References[edit] Goldcrest. Description[edit] Identification[edit] Nominate R. r. regulus in Belgium. 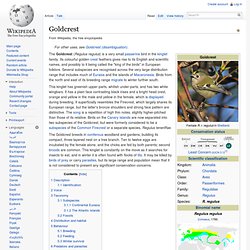 The Goldcrest has a bright crest and a relatively plain face. A little orange is seen at the back of the crest indicating a male The Goldcrest is usually easily distinguished from other small birds in its range, but poor views could possibly lead to confusion with the Common Firecrest or Yellow-browed Warbler. Voice[edit] Passerine. A passerine is a bird of the clade Passeriformes, which includes more than half of all bird species. 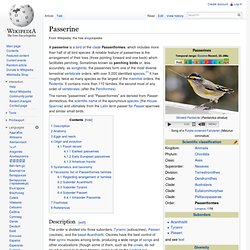 Birds of the World on Postage Stamps. Upload.wikimedia.org/wikipedia/commons/b/b4/BirdBeaksA.svg.