The Land of Enchantment at Work 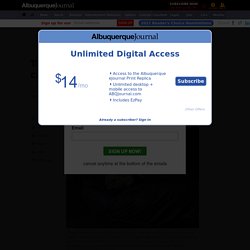 Michelle Lujan Grisham said Friday she will call a special session on March 30 dealing with a proposal to make New Mexico the latest state to legalize cannabis for adult users. The state already has a medical marijuana program, as shown in this March 2020 file photo. Sunport bodies suspect claims he killed 11 more in NM. Sean Lannon (St. 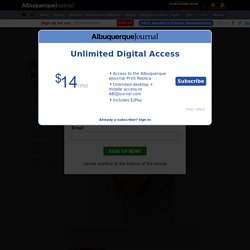 Louis City Justice Center) ALBUQUERQUE, N.M. — Prosecutors say a man suspected in the deaths of four people in New Mexico and one in New Jersey has claimed to be responsible for 11 more killings. Chief of Detectives Thomas Gilbert, of the Gloucester County Prosecutor’s Office in New Jersey, said 47-year-old Sean Lannon told detectives he had killed 11 “drug dealers” around Grants. “He not only acknowledged that he had done the total of five but indicated he had done a number of other homicides,” Gilbert said.

“The authorities now have to explore the veracity of his claim.” Grants Police Lt. “Is it possible? Lannon is currently suspected in the deaths of his ex-wife Jennifer Lannon, 39, Matthew Miller, 21, Jesten Mata, 40, and Randal Apostalon, 60. Governor’s Office floats special session on cannabis bill. Sen. 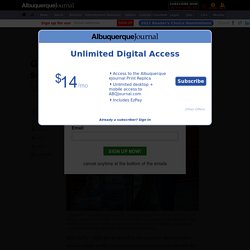 Cliff Pirtle, R-Roswell, stands next to his desk on the Senate floor on Friday, with a bin of bills at the ready. Pirtle is among the lawmakers that have proposed cannabis legalization bills during the 60-day legislative session that ends Saturday. Lujan Grisham signs overhaul of NM liquor laws. In this March 9 photo, a display shows mini liquor bottles for sale at Kelly’s Liquors in Albuquerque. 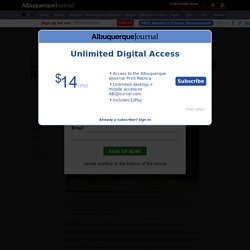 Legislation signed Wednesday will ban the sale of containers of 3 ounces or less of liquor, unless they are to be consumed on site, such as in a hotel or at a golf course. (Adolphe Pierre-Louis/Albuquerque Journal) SANTA FE — Gov. Liquor law changes head to Senate floor. In this file photo from May, Gabriel Romero, general manager of The Quarters liquor store on Yale in Albuquerque, stocks shelves. 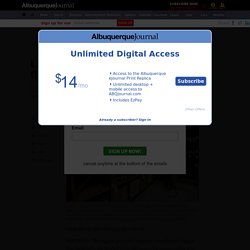 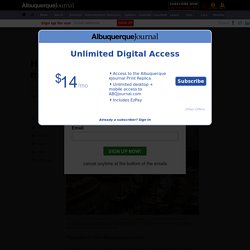 Javier Martinez, D-Albuquerque, appears on screen Friday as he presents a bill to legalize cannabis use for adults in New Mexico. (Eddie Moore/Albuquerque Journal) Copyright © 2021 Albuquerque Journal SANTA FE – The push to legalize marijuana use for adults in New Mexico won approval in the state House late Friday, sending the proposal on to the Senate for the final, crucial weeks of the session. If signed into law, the legislation, House Bill 12, would allow the first commercial sales to begin Jan. 1 next year. Rep. Cannabis legalization bill heads to House floor. A House bill aimed at legalizing and regulating recreational-use cannabis passed its second committee Wednesday and will next be debated on the chamber’s floor. 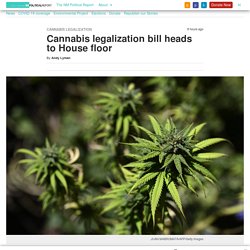 HB 12, sponsored by Democratic Representatives Javier Martínez of Albuquerque and Andrea Romero of Santa Fe, passed the House Taxation and Revenue Committee along party lines by a vote of 8-4. The committee adopted Martínez’s proposed substitute bill which made some significant changes including eliminating specific tax revenue designations, often referred to as earmarks. Specifically, the new version of HB 12 would eliminate earmarks for a medical cannabis patient fund and a designation for communities disproportionately impacted by previous drug laws, although Martínez said funds for those specific purposes would remain. Martínez also stressed that New Mexico could be the third state in the U.S. to legalize cannabis legislatively instead of through a voter initiative. Rep.

Man who killed officer had long criminal history. Omar Cueva (Courtesy NMSP) Copyright © 2021 Albuquerque Journal The man who police say shot and killed a New Mexico State Police officer during a traffic stop outside Deming on Thursday was on his way to Las Cruces for a drug deal. 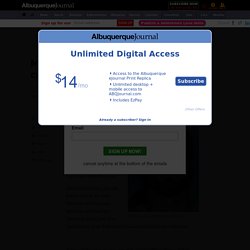 Omar Felix Cueva, 39, was pulled over in his white Chevrolet pickup truck heading eastbound on Interstate 10 as part of an operation by State Police and Homeland Security Investigations. Herrell Votes to Keep Q-Anon "Loony" Conspiracy Congresswoman on Key Committees - The Paper. By ALAN FRAM and BRIAN SLODYSKO Associated Press with local reporting on Rep. 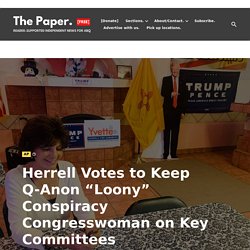 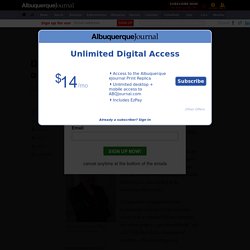 In 1st Judicial District Court, felony drug possession makes up about a third of all court cases. District Attorney Mary Carmack-Altwies Between people cycling in and out of the court system, and the judicial resources needed to prosecute these crimes, 1st Judicial District Attorney Mary Carmack-Altwies knew she needed to do something differently. “I come from a criminal defense background, and what I saw working when I was a criminal defense attorney was when people … got offered help,” she said. Increasingly Bold Israel Begins Building Settlements In Downtown Albuquerque.

ALBUQUERQUE, NM—In a move that shocked and angered city residents, including families that have called the area home for centuries, an increasingly bold Israel announced Tuesday that it had begun building settlements for its citizens in downtown Albuquerque, NM. “Our High Planning Committee has approved 1,200 new Israeli homes in Albuquerque’s central business district and will soon move forward with plans to expand into the nearby Old Town and Nob Hill neighborhoods as well,” said Prime Minister Benjamin Netanyahu, who confirmed Albuquerque Plaza, the Metropolitan Courthouse, and the historic KiMo Theatre were just a few among many of the city’s buildings that would soon be demolished to make way for brand-new Israeli subdivisions.

“We will also be taking measures to protect these new settlements by building a barrier wall along the Santa Fe border, which can only be crossed by those holding an Israeli passport. A river used to run through it: how New Mexico handles a dwindling Rio Grande. Imagine the world without its most famous rivers: Egypt without the Nile, or London without the Thames. In Las Cruces, New Mexico, residents don’t have to envision the American west without the Rio Grande – it runs dry in their city almost every single year. But this isn’t its natural state. Isaac Melendrez, who was born near Las Cruces in 1934 and contributed to an oral history of the Rio Grande, remembered swimming in the river with his family as a child, while throngs of birds soared overhead. During the rainy season, the river’s floodwaters sounded like trains.

New group to lobby for NM bars, venues. To-go orders and outdoor dining have been the saving grace for some bars with kitchens like Sister Bar in Downtown Albuquerque. (Jim Thompson/Albuquerque Journal) Copyright © 2020 Albuquerque Journal After being closed for nine months, New Mexico bar and entertainment venue owners are banding together to form an association to lobby on their behalf.

“What’s happening is the bar owners who, arguably, have been the most severely impacted by the shutdown, really have had little chance at relief,” said Matt Kennicott, one of the organizers of the newly created New Mexico Bar, Entertainment and Nightclub Association. “They had little assistance coming their way from either the state or the federal government.” Geoscientists Discover Ancestral Puebloans Survived From Ice Melt in New Mexico Lava Tubes.

For more than 10,000 years, the people who lived on the arid landscape of modern-day western New Mexico were renowned for their complex societies, unique architecture and early economic and political systems. But surviving in what Spanish explorers would later name El Malpais, or the “bad lands,” required ingenuity now being explained for the first time by an international geosciences team led by the University of South Florida. Exploring an ice-laden lava tube of the El Malpais National Monument and using precisely radiocarbon- dated charcoal found preserved deep in an ice deposit in a lava tube, USF geosciences Professor Bogdan Onac and his team discovered that Ancestral Puebloans survived devastating droughts by traveling deep into the caves to melt ancient ice as a water resource. “The melting cave ice under current climate conditions is both uncovering and threatening a fragile source of paleoenvironmental and archaeological evidence,” he added.

‘Qualified immunity’ a mess. On Oct. 13, 2012, in Lordsburg, Timothy Young allegedly turned a corner without using his turn signal. We know about it because Young was pulled over by a Hidalgo County sheriff’s deputy. As he was writing the ticket, the deputy thought Young was acting squirelly. Or, in the more formal language of an opinion issued in June of this year by the New Mexico Court of Appeals, his “demeanor and actions during the stop gave rise to a suspicion that he was transporting contraband.” When a drug-sniffing dog alerted to the car seat, but the deputy still couldn’t find any drugs, he and his lieutenant decided to take Young to the Gila Regional Medical Center for an abdominal X-ray and rectal exam.

‘Time for a new adventure’ Model Pharmacy owner Jack Lerner is preparing to retire after owning and operating the shop for 34 years. Shocking Video Of Rioters In Albuquerque. ‘New Mexico Civil Guard’ militia members arrested after shooting at Albuquerque protest: report. Suit claims dancer hurt patron of strip club. A hospital’s secret coronavirus policy separated Native American mothers from their newborns. Making waves on the Chama. Copyright © 2020 Albuquerque Journal Ed Lucero, of Embudo, surfs on the Chama River near the Abiquiú Lake Dam. Dozens of people come daily to play on the wave created by New Mexico Game and Fish, the Army Corps of Engineers and Riverbend Engineering. New Mexico’s new norm: Wear a mask in public. 'I have nothing to lose': forgotten survivors of the new Wild West. Inhaling precious breaths with a hole in his chest, a young University of New Mexico baseball player, Jackson Weller, lay on the street bleeding.

He was shot to death after a night out with friends. Two weeks prior a beloved postal worker, Jose Hernandez, was delivering on an Albuquerque route when a 17-year-old allegedly shot him following an altercation. Elsewhere in the city, the mother of two New Mexico state police officers was killed in front of her home. Push to legalize pot faces session labyrinth. ‘Lt. Vigil’ wakes up officer at police academy. Metro Surge resulted in 738 arrests. Tasting room an exclusive showcase for NM wines. Adolphe Pierre-Louis/JournalCrafted wine educator Daniel Gutierrez pours a glass of Demigod , a cabernet sauvignon from Noisy Water , a Ruidoso, NM winery .