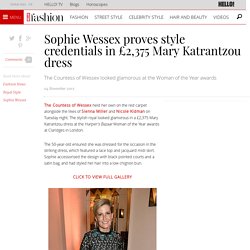 The stylish royal looked glamorous in a £2,375 Mary Katrantzou dress at the Harper's Bazaar Woman of the Year awards at Claridges in London. The 50-year-old ensured she was dressed for the occasion in the striking dress, which featured a lace top and jacquard midi skirt. Sophie accessorised the design with black pointed courts and a satin bag, and had styled her hair into a low chignon bun. Sophie Wessex looked glamorous in a Mary Katrantzou dress It was another style success for the royal, who previously said that she tried to resist wearing designer clothes because she didn't want her outfits to overshadow her charity work.

"It's still not about me, it's about my charities. Ibtimes. Sophie, the Countess of Wessex brought her royal style to the Harper’s Bazaar Women of the Year awards held at Claridges in London Tuesday.

The 50-year-old royal posed on the red carpet in a Mary Katrantzou dress. She looked glamorous for the evening soiree in the little black dress. Sophie nailed it in the black peek-a-boo dress by London-based designer Katrantzou. Queens Letizia and Rania step out in dramatically different looks on state visit. Royals attended meeting at Centre of Molecular Biology in MadridQueen Letizia, 43, opted for no-nosense grey suit for the visitHer Jordanian counterpart, 45, chose monochrome chic with a boho twist Jordanian royals are on a two-day state visit to Spain By Siofra Brennan For Mailonline Published: 14:42 GMT, 20 November 2015 | Updated: 16:28 GMT, 20 November 2015 She's known for her impeccable style but since welcoming a fellow royal yesterday, Queen Letizia has had some serious competition in the fashion stakes. 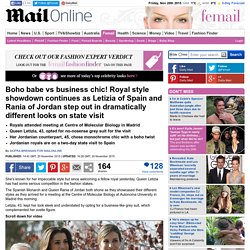 The Spanish Monarch and Queen Rania of Jordan both shone as they showcased their different styles as they arrived for a meeting at the Centre of Molecular Biology at Autonoma University in Madrid this morning. Letizia, 43, kept her look sleek and understated by opting for a business-like grey suit, which complemented her svelte figure.

Scroll down for video Rania showed off her boho side in a voluminous midi skit, which she teamed with a peasant-style white blouse. Loaded: 0% Stéphanie's awesome updos are back! (She and Guillaume at the Red Cross Bazaar. Looking sharp! Queen Rania cuts a striking figure in geometric skirt. Prince Carl Philip and Sofia Hellqvist's official wedding photograph revealed. Sweden's Prince Carl Philip married Sofia Hellqvist, 30, at a ceremony in the chapel at Stockholm's Royal PalaceOfficial wedding portraits with family and European royals have been unveiled He is the third in line to the throne behind his elder sister Princess Victoria and her daughter, Princess Estelle, three By Bianca London for MailOnline. 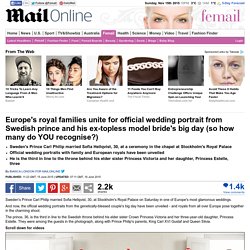 Party planner, author... and now style guru! Pippa Middleton reveals turning fashion designer for charity was 'fun and creative' Pippa Middleton has helped to designed a limited edition dress and scarfThe pretty summer pieces were created in collaboration with Tabitha Webb£295 dress and £95 scarf are being sold for the British Heart Foundation By Ruth Styles for MailOnline. 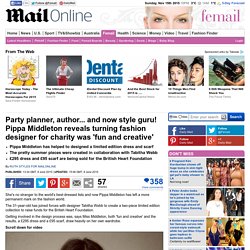 Inside Sophie Wessex's VERY expensive wardrobe with clothes made just for her. The Countess of Wessex is one of the most glamorous royals - but her look doesn't come cheap50-year-old Sophie is fond of designer names, among them Gucci, Victoria Beckham and Peter PilottoShares a love of Alexander McQueen and Emilia Wickstead with the Duchess of CambridgeDesigners chosen for most recent outings include Pucci, Emilia Wickstead and Diane von Furstenburg By Ruth Styles for MailOnline Published: 10:06 GMT, 9 June 2015 | Updated: 14:43 GMT, 9 June 2015 Elegant in her £225 Diane von Furstenburg dress, the Countess of Wessex looked every inch the glamorous royal as she welcomed members of Queen Alexandra's Royal Army Nursing Corps to Buckingham Palace last night. 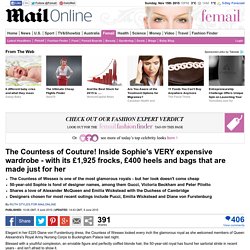 Royal bridal gowns including Kate Middleton and Grace Kelly's remembered. Sweden is gearing up for a royal wedding on Saturday when Prince Carl-Phillip marries former model Sofia HellqvistShe will become the 40th royal bride since 1923, when the Queen Mother married wearing a Madam Handley gownSpectacular gowns since then include the Queen's Norman Hartnell dress which was decorated with 10,000 pearlsGrace Kelly wore two dresses, one pink and one white, by MGM Studio designer Helen Rose on her 1956 big dayMore recent gowns include the Duchess of Cambridge's lace McQueen and Princess Charlene's Armani creation By Ruth Styles for MailOnline Published: 07:39 GMT, 10 June 2015 | Updated: 10:31 GMT, 10 June 2015 When 30-year-old Sofia Hellqvist marries Sweden's Prince Carl-Phillip, 36, this Saturday, she will become the 40th royal bride to walk down the aisle since the Queen Mother married the then Duke of York in 1923. 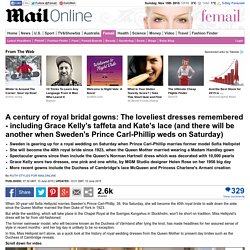