People in The Royal Secret

Sir Isaac Newton’s Secret Quest for the God Engine. Giordano Bruno: What Led The Renowned Friar and Astrologer to a Burning Stake? A monumental statue of Giordano Bruno stands in the heart of Rome as a reminder of the remorse of the people who accused him and sentenced him to death. 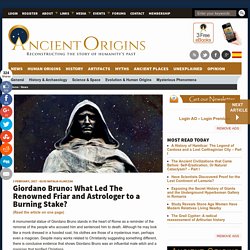 Although he may look like a monk dressed in a hooded coat, his clothes are those of a mysterious man, perhaps even a magician. Despite many works related to Christianity suggesting something different, there is conclusive evidence that shows Giordano Bruno was an influential male witch and a magician that terrified Christians. Giordano Bruno was born on January 1st, 1548 in Nola as Filippo Bruno. His full name in Latin was Iordanus Brunus Nolanus. He was very young when he discovered his passion for science. The earliest depiction of Bruno is an engraving published in 1715 in Germany. ( Public Domain ) Giordano believed that a bright mind could change the world. He studied books that were both new and exciting and those that were old and covered with the dust of the religion that dominated Europe. 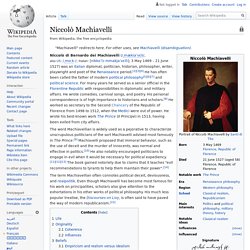 For many years he served as a senior official in the Florentine Republic with responsibilities in diplomatic and military affairs. Historical Figures You Didn't Know Were Black. Image Source: Twitter.com Hitler’s Jewish ancestry isn’t the strangest twist in racial history. 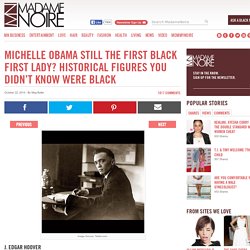 FBI director J. Edgar Hoover — the man who plagued the black liberation movement from Marcus Garvey to the Black Panther Party — was known by his peers as a passing black man. His childhood neighbor writer Gore Vidal famously quoted, “It was always said in my family and around the city that Hoover was mulatto. And that he came from a family that passed.” And apparently that was a closely-guarded secret. “In the late 1950’s, I was a young girl growing up in rural McComb, Mississippi. Anthony BACON. Anthony BACON Born: 1558, London Died: 1601 Buried: St. 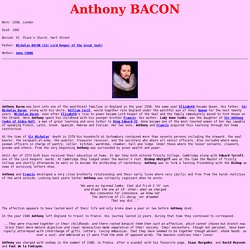 A Who's Who of Tudor Women (C-Ch) Compiled by Kathy Lynn Emerson. 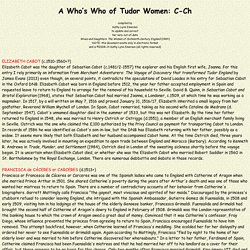 The Immortal Count of Saint Germaine: Ascended Master of Ancient Wisdom. Read Part 1 The Count of Saint-Germaine claimed many times to be immortal, apparently already three hundred years old by the time of his appearance in the 1700s. 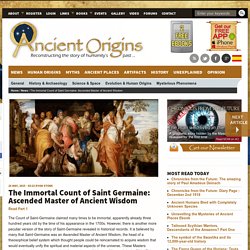 However, there is another more peculiar version of the story of Saint-Germaine revealed in historical records. It is believed by many that Saint-Germaine was an Ascended Master of Ancient Wisdom, the head of a theosophical belief system which thought people could be reincarnated to acquire wisdom that would eventually unify the spiritual and material aspects of the universe. Elizabeth 1st.

John Dee. Was the Earl of Southampton the son of Queen Elizabeth? NO. 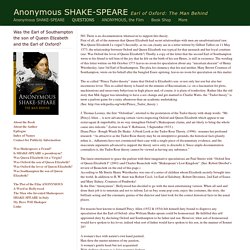 There is no documentation whatsoever to support this theory.First of all, all of the rumours that Queen Elizabeth had secret relationships with men are unsubstantiated (see: Was Queen Elizabeth I a virgin?) Secondly, as we can clearly see in a letter written by Gilbert Talbot on 11 May 1573, the relationship between Oxford and Queen Elizabeth was typical for that monarch and her loyal courtiers (see: Was Oxford the lover of Queen Elizabeth?) The legend of King Arthur. Merovech. Silvered brass mounting from 1867 depicting Merovech victorious in battle, by Emmanuel Frémiet. 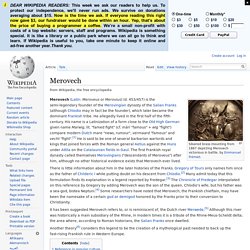 Merovech (Latin: Meroveus or Merovius) (d. 453/457) is the semi-legendary founder of the Merovingian dynasty of the Salian Franks (although Chlodio may in fact be the founder), which later became the dominant Frankish tribe. He allegedly lived in the first half of the fifth century. His name is a Latinization of a form close to the Old High German given name Marwig, lit. Anthony Bacon (1558–1601) Anthony Bacon (1558–1601) was a member of the powerful English Bacon family who was also a spy during the Elizabethan era. 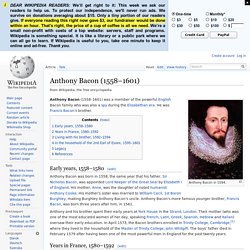 He was Francis Bacon's brother. Anthony and his brother spent their early years at York House in the Strand, London. Their mother (who was one of the most educated women of her day, speaking French, Latin, Greek, Spanish, Hebrew and Italian) oversaw their early education. In April 1573, the Bacon brothers enrolled in Trinity College, Cambridge,[1] where they lived in the household of the Master of Trinity College, John Whitgift. The boys' father died in February 1579 after having been one of the most powerful men in England for the past twenty years. Bacon returned to England in February 1592. Jacques De Molay Templar Leader. Henry Percy, Ninth Earl of Northumberland (1564-1632), the "Wizard Earl" HENRY PERCY, ninth Earl of Northumberland (1564-1632), son of Henry Percy, eighth earl, born at Tynemouth Castle in 1564, was educated in the protestant faith by one Thompson, vicar of Egremont. 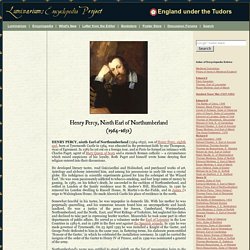 In 1582 he set out on a foreign tour, and at Paris he formed an intimacy with Charles Paget, agent of Mary Queen of Scots and a staunch Roman catholic — a circumstance which raised suspicions of his loyalty. Both Paget and himself wrote home denying that religion entered into their discussions. He developed literary tastes, read Guicciardini and Holinshed, and purchased works of art. Astrology and alchemy interested him, and among his possessions in early life was a crystal globe. His indulgence in scientific experiments gained for him the sobriquet of 'the Wizard Earl.' Francis Crick Discoverer of DNA. The Francis Crick Institute Francis Crick Background Leadership Our founders Achievements Jobs and study PhD programme Contact us Follow the Crick Subscribe to RSS Feeds Skip to main content.

Rudolf Steiner. Elizabeth W Gallup Cryptographer. St Germanus of Auxerre. Germanus of Auxerre (Welsh: Garmon Sant) (c. 378 – c. 448) was a bishop of Auxerre in Late Antique Gaul. He best remembered for his journey to combat Pelagianism in Britain in or around 429 AD, and the records of this visit provide valuable information on the state of post-Roman British society. He also played an important part in the invention and promotion of the Cult of Saint Alban, who was unknown before the saint revealed himself to Germanus in a dream or holy vision. Germanus is venerated as a saint in both the Roman Catholic and Orthodox churches, which commemorate him on July 31. Makhir Ibn Habibi al-Narboni, Judiarch of Narbonne (c.725 - c.793) Do not confuse him with Thierry I, comte d'Autun, or with Théodéric IV of Austrasia.' Makhir ben Havivai was a Babylonian-Jewish scholar, a descendant of the House of David, and the leader of the Jewish community of Narbonne in southern Gaul at the end of the eighth century.

His descendants were for many generations the nasi or leaders of that community, and Carolingian client-kings in Septimania. Zuckerman suggested he was identical with Maghario (recte Magnario), Count of Narbonne in 791. However, that Magnario was probably Meginarius, a Frank, counselor to Louis the Pious in Aquitaine about 794. Makhir belonged to the family of Exilarchs of the Jews at Babylon.

In wars against the Christian Crusaders, he achieved great success with the capture of Jerusalem (October 2, 1187), ending its nearly nine decades of occupation by the Franks. Saladin was born into a prominent Kurdish family.

Biography - English poet and dramatist. Leonaro Da Vinci. Francis II Rákóczi. Francis II Rákóczi (Hungarian: II. Albert von Le Coq Explorer. Albert von Le Coq (1860–1930) was a German brewery owner and wine merchant, who at the age of 40 began to study archaeology.[1] Background[edit] von Le Coq was heir to a sizable fortune derived from breweries and wineries scattered throughout Central and Eastern Europe, thus allowing him the luxury of travel and study at his leisure. The business he owned survives today as the A. Walt Whitman Poet Philosopher. Walter "Walt" Whitman (/ˈhwɪtmən/; May 31, 1819 – March 26, 1892) was an American poet, essayist and journalist.