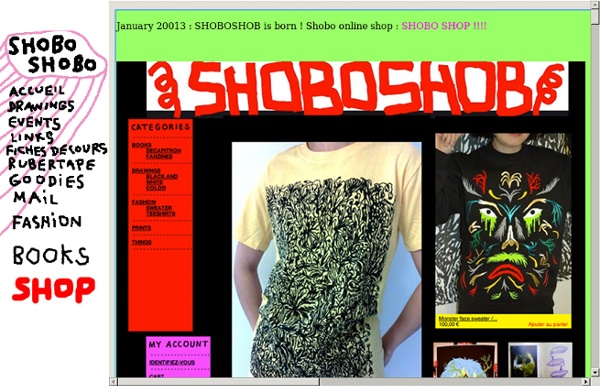 for people who know everything cool already !! — this.hearts.on.fire. The Towering Genius of Alexander McQueen Alexander McQueen’s extraordinary talent was not just limited to creating clothes: the man also knew how to put on a spectacular show, quite unlike any other. In this post I am going to look back on McQueen’s fashion career. Of course I will by no means be able to cover everything, and when I say ‘look back’ I don’t really mean it literally: I sadly never attended a single McQueen show, and I am ashamed to say it is only now that I have properly discovered some of his most amazing shows and collections, many of which took place long before I was really aware of fashion. Still, this will hopefully imbue the post with something of an optimism: not so much looking back, but rather looking into, and looking forwards at, the incredible legacy which Alexander McQueen leaves. Alexander McQueen and Isabella Blow in the early days (image from The Telegraph). McQueen and Isabella Blow pose for Vanity Fair (image from Vanity Fair). Alexander McQueen for Givenchy: (all images in this section from WWD)

Grace Coddington Early life and modeling career[edit] At the age of 26, she was in car accident that left her disfigured (she lost her eyelid). She later had plastic surgery to have it reconstructed. The September Issue[edit] Coddington came into the public eye in 2009 with the release of The September Issue, a fly-on-the-wall documentary about the making of the September 2007 issue of Vogue. Personal life[edit] She raised her nephew Tristan, since the age of 8, after the death of her sister Rosemary.[7] In 1986, she moved to New York to work for Calvin Klein.[4] She has since then lived with her partner, hair stylist Didier Malige, and several cats.[8] References[edit] Jump up ^ Grace Coddington, Didier Malige, Sally Singer, and Michael Roberts (2006).

Fall Fashion Grace Coddington Perhaps that old adage about never working with animals and children didn'tmake it to the fashion world. Or perhaps the fashion world, typically willful, just chose to ignore it. Whatever the case, the creative director of Vogue, Grace Coddington, and photographer Arthur Elgort seem blissfully unworried as they corral four children under the age of 12 and one palomino into their remake of Annie Get Your Gun. Re-creating theWild West at an East Hampton horse farm, Vogue's version of the musical stars models Carmen Kass (as Annie Oakley) and Patrick Sullivan (as Frank Butler), a Buffalo Bill look-alike (whose method acting extends toturning up in an Annie Get Your Gun T-shirt, circa the Bernadette Peters years), and racks and racks of Ralph Lauren clothes. It's only eleven in the morning, but already the heat is fierce. The door of the location van swings open, and Carmen Kass swaggers out in afringed skirt, cowboy boots, and a ten-gallon hat.

International Shoe Size Conversion Charts/Converter Tables for Shoes Sizes Adult, Girl's and Boy's Shoe Sizes Conversion tables for American, Australian, British, Canadian, European, Japanese, Korean, Mexican, Russian, Ukrainian, New Zealand, Inches, Centimeters, Mondopoint shoe sizes If your little piggies are going to market, these shoe size conversion tables can help. You can use them to convert from the shoe size used in one country or region to the shoesize used in another country or region. However, store and manufacturer practice varies widely. Having studied many published shoe size tables on the net, I would not trust any of them. Note: Microsoft Internet Explorer now gives a "security warning" about DHTML used on this page. Find out about XenCraft's presentation:My "Shoe Size Web Page" Fetish or How Companies are Losing Money on the Internet A Quest for Understanding is a nice video from the perspective of a husband of a shoe lover. I am not responsible for any problems caused by reliance on this table. Using the Shoesize Convertors Top of page

Hussein Chalayan Hussein Chalayan MBE (/huːˌseɪn ˈʃʌləjɑːn/; given name Hüseyin Çağlayan, Turkish: [hyseˌjin ʧaːlaˈjan]) (born 1970) is a British/Turkish Cypriot fashion designer. He has won the British Designer of the Year twice (in 1999 and 2000) and was awarded the MBE in 2006.[1] Early life and education[edit] Early career[edit] Chalayan established his own company in 1994, Cartesia Ltd., as well as his ready-to-wear line, Hussein Chalayan (which he changed in 2010 to just “Chalayan” because of the oriental connotation of his first name, Hussein). Professional career[edit] Hussein Chalayan dress designs on display at a 2009 exhibit. Hussein Chalayan dress on display at Design Museum in London, United Kingdom in 2009. Hussein Chalayans' fashion shows are characterized by minimal sets and a mood of suspense, incorporating elements of contemporary interiors, urban architecture, and geometric structures. In 1995, Chalayan beat 100 competitors to clinch a top London fashion design award. Awards[edit]