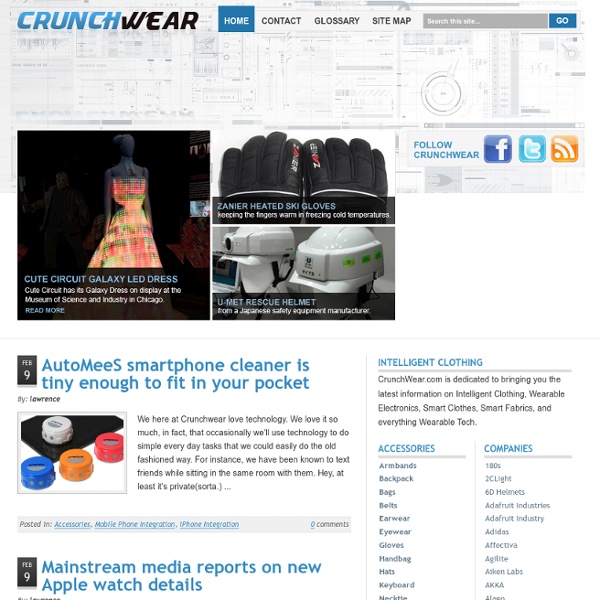 Smart fabrics - Indepth - Catapult - ABC Online Clothes don't just look good, they're starting to think for you as well. Rebecca Martin reports on the next generation of textiles in part two of our fashion series. When you bought your last t-shirt or woolly jumper, you probably noted its colour, price tag and maybe it's washability. It's all about to get a lot more technical. Fabrics have become an arena for competition for scientists all around the world. The race is on to be the first to develop new fabrics that will not only keep you warm but also cool, dry, moisturised and free of bacteria, odour and stains while measuring your heart rate. Temperature sensitive textiles The fundamental job of clothes is to keep us warm or cool, so it's no surprise that many of the smart textiles entering the market look to regulate body temperature. Called phase-change fabrics, heat-modifying textiles are mostly seen in outdoor gear like windbreakers and beanies. "Paraffin changes its character. Odour eaters Medical material Top image: iStockphoto

TechCrunch humansinvent Lucy McRae is an inventor who has a truly unique approach to technology. Trained as a ballerina and an architect, she spends her days looking at transforming the human body. In her own words she is “straddling the world of fashion, technology and the body.” Essentially McRae is a ‘Body Architect’ – a title actually fabricated to get her breakthrough job. “I went for a job interview and the human resources guy asked me “So…what are you?” Body architecture is born McRae worked in the Future Design Research Programme at Phillips looking at electronic tattoos, making dresses with light and electronic sensing jewellery. I hate the idea of being labeled and if I have to book something six months in advance, it totally freaks me out “I think it is an unconscious thing because I generally use what I have around me, it has always been a resourceful way of working,” she says. A sensitive technology project that McRae worked on with Phillips. Working outside the box Re-programming our bodies

PandoDaily | the site of record for silicon valley magnetU searches for nearby social matches magnetU is a wearable electronic device, that wirelessly seeks out other magnetU-users whose social profile is compatible with that of its wearer Image Gallery (2 images) When I was younger and cared a lot more about being "cool," I would sometimes wear T-shirts with the names of my favorite rock bands on them. While this was partly just to show off my supposed musical enlightenment to the world, it was also in hopes that some like-minded person (preferably female and attractive) would see it and strike up a friendship with me. Well, magnetU is sort of like a high-tech band T-shirt. The wearable radio frequency device wirelessly transmits your personality profile to the world as you roam the streets, ever on the lookout for another magnetU transmitting a compatible profile from a nearby person. Users can load the magnetU with a profile of their choice via their computer, depending on where they're going. About the Author Post a CommentRelated Articles

Notcot.com design *notcot - 04.13.14 , 15:19 - 0 Notes Sexercize: Transforming the Maserati Ghibli When first approached about Kylie Minogue’s Sexercize, I was skeptical at best… as I learned about the special music video by Roman Coppola, Chandelier Creative, and Maserati… my curiosity got piqued. At first glance, this bizarre retro car porn of a film is just that… until you see the original it’s an homage to - the ‘65 piece ‘Kustom Kar Kommandos’ by Kenneth Anger… and to peel back the layers even further, Chandelier Creative and Maserati further indulged my curiosity with a loaner Maserati Ghibli S Q4 and a behind the scenes peek at how much they transformed the Ghibli for the video - and wow! What a process! To be completely honest, the more i played with the Maserati Ghibli S Q4 all week, the more curious i got as to how they turned the car i was in into the stunner in the video! --> to more images *notcot - 04.06.14 , 02:20 - 2 Notes Jeremy Fish: Hunting Trophies Epic. --> to more images Wow. p.s.

Fitted Fashion Uses 3D Scanners to Create Custom-Fit Jeans The Spark of Genius Series highlights a unique feature of startups and is made possible by Microsoft BizSpark. If you would like to have your startup considered for inclusion, please see the details here. Name: Fitted Fashion Quick Pitch: 3D scanners and pattern-making software are used to create perfect-fitting jeans and other clothing. Genius Idea: As almost any woman will tell you, the single most challenging item of clothing to shop for is jeans. According to a ShopSmart poll published in June 2010, more than 56% of women say they have trouble finding well-fitting and flattering jeans, with 8% seeking professional guidance to locate a pair. Fitted Fashion, a recent graduate of startup incubator Betaspring, is one of several startups aiming to address that problem. “Self or tailor-made measurements tend to have a lot of errors,” Motlagh notes. Fitted Fashion is currently testing its designs with a group of 65 women. The startup has raised $250,000 in private seed funding to date.

Shoeboxdwelling Interactive design: where fashion, technology and art meet and mingle — JSCMS Younghui Kim, 38, floated in the dark waters of Bio Bay in Fajardo, Puerto Rico. Tiny flashes of light went off around her, as tiny water creatures called dinoflagelletes lit up at the slightest friction, like stars on water. “It was a very peaceful moment,” said Kim. “And I thought, ‘Ah, I’d like to make a skirt that lights like just like this Bio Bay.” And she did. Her Stir-It-On skirt, the latest piece in her interactive wearable collection, is made up of layers of deep blue fabric. Kim laughed as she thought of wearing it on the New York subway. “It’ll be like Bio Bay,” she said. Kim’s creations are simple but point to a new era in design, often labeled smart fashion. But these clothes are not of a metallic-cyborg-meets-Spock variety. Some are more art than high fashion, but they hint of a future where clothes are more than just a covering, when they become performance pieces that promote social interaction. The heavily quilted Skorpions dress moves on the skin, parasite like.