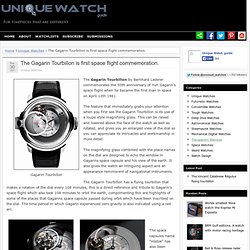 The feature that immediately grabs your attention when you first see the Gagarin Tourbillon is its use of a loupe style magnifying glass. This can be raised and lowered above the face of the watch as well as rotated, and gives you an enlarged view of the dial so you can appreciate its intricacies and workmanship in more detail. Zero A7 - Intelligent Watches is the European specialist in modern design LED watches and official TIME-IT & Seahope distributor. Meet Zero A7, the brand new & very cool Time-it silicone watch. 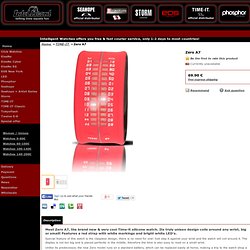 Its truly unisex design coils around any wrist, big or small! Features a red strap with white markings and bright white LED's. Special feature of this watch is the claspless design; there is no need for one! Just slap it against your wrist and the watch will coil around it. The display is not too big and is placed perfectly in the middle, therefore the time is also easy to read on a small wrist. Unlike its predecessor, the new Zero model runs on a standard battery, which can be replaced easily at home, making a trip to the watch shop a thing of the past. Zero displays time using hours (left side), 10 minute blocks (right side) and single minutes (right side under).

TIME-IT Classic - Intelligent Watches. Marko Petrovic “Avenger” Lamborghini watch. Avenger watch For his watch design Marko Petrovic drew inspiration from the shapes and forms in Lamborghini’s supercars, in particular the Aventador , that was released earlier in the year. 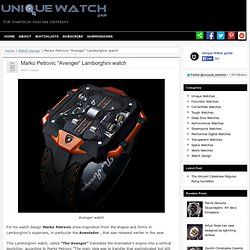 This Lamborghini watch, called “The Avenger” translates the Aventador’s engine into a vertical tourbillon, according to Marko Petrovic “The main idea was to transfer that sophisticated but still highly aesthetic engineering into something other than vehicle but still close to it. Vertical tourbillon mechanism seems perfect in this case, following the design in presenting not only something that looks like a cover of a Lamborghini engine, but also represents a glimpse of Lamborghini engine technology.” It also uses the same signature black and orange colour scheme. The outside of the Lamborghini watch case is fitted with what could be the equivalent of roll bars or fenders and the overall design does a good job of capturing the Lamborghini look and feel.

Concord C1 Tourbillon POP Gravity. In 2008 Concord released its ground breaking, and breathtakingly stunning C1 Quantum Gravity, an imposing futuristic piece with a Tourbillon mounted outside the case of the watch and connected by cable-stayed bridges and featuring green phosphorescent nano-particles held in a vertical column used to indicate the battery’s power level! 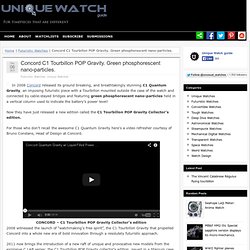 Greubel Forsey Invention Piece No.2. MB&F Thunderbolt. Source: MB&F MB&F had been wanting to create an aviation inspired “Horological Machine” especially since Max Busser (the MB part of the name) has had a life long fascination with aeronautics since he was a child building them as models. 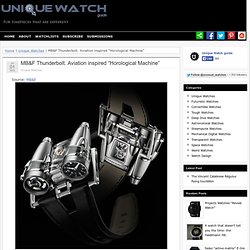 The main inspiration according to MB&F is the A-10 plane – “Thunderbolt” is one of its nicknames -the top-mounted jet engines providing visual design cues.The jet-turbine design influences are obvious from the moment you set eyes on it. The 311 piece movement took three years to develop and the Titanium case, measuring 54mm wide x 52mm long x 24mm high, is quite possibly the most complex watch case created so far. Urwerk UR-1001. Urwerk UR-1001 The stunning (and no doubt stunningly expensive) Urwerk UR-1001 Zeit Device watch is described by Urwerk as an “Uber Complication” and with its futuristic looks it certainly has an uber cool appearance too. 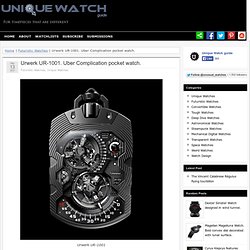 Immediately recogniseable as an Urwerk, it is their first “pocket watch” or as they prefer to call it “Zeit Device”, its also their first model to feature a double satellite display. One indicating hours similar to the UR-203 model and one indicating the month. As each satellite revolves the individually numbered cubes rotate to indicate the time and date. The UR-1001 took four years to develop and being a pocket watch meant that Urwerk were able to fit more into it mechanically than is possible with a wristwatch, so they were able to include an array of complications and show off their horological prowess. 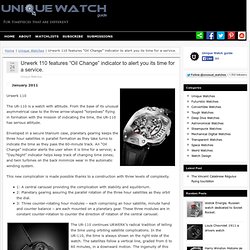 From the base of its unusual asymmetrical case to the three arrow-shaped “torpedoes” flying in formation with the mission of indicating the time, the UR-110 has serious attitude. Enveloped in a secure titanium case, planetary gearing keeps the three hour satellites in parallel formation as they take turns to indicate the time as they pass the 60-minute track. Dezeen Watch Store. Watches - Fashion. Login | Cart (0) about CKIE | contact us returns | sell product PayPal Visa Mastercard. 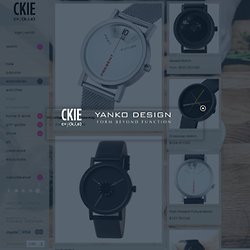 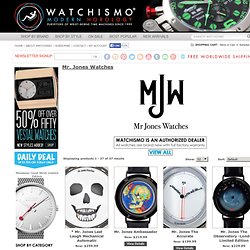 To use a cinematic analogy: most watches may be thought of as Hollywood blockbusters replete with happy ending and saccharine sentiment; Mr Jones Watches in contrast are film noir - interested in the anti-hero and the complicated pleasures of everyday life... “The watch today is a defunct tool - we all have a mobile phone to check the time on, but the watch endures because it expresses something of our personality. Whilst many watches are a symbol of material wealth, Mr Jones Watches are concerned with ideas.” Dezeen Watch Store » Shop»Catalog Products. RÉPLICAS DE RELÓGIOS › Réplicas U-Boat - Replicas de Relogios Famosos - Replica Relogio. 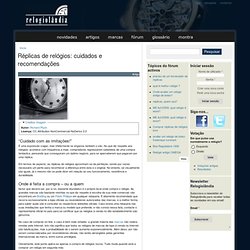