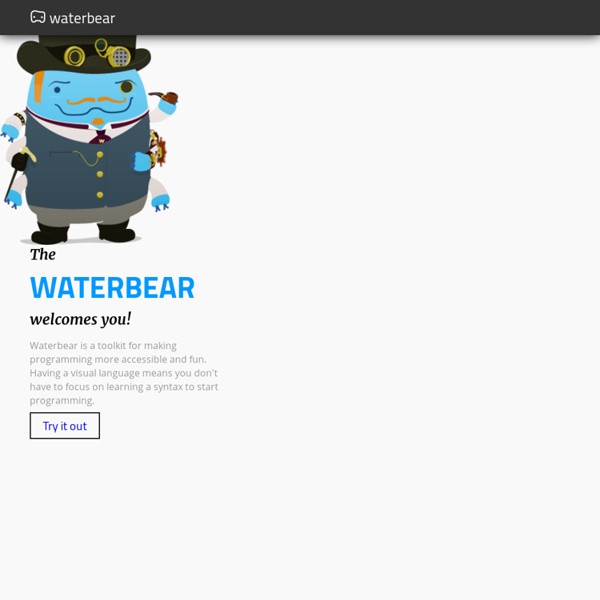 Waterbear is a toolkit for creating drag-and-drop programming languages, with some example languages you can play around with and learn from. The goal is to make it easy to wrap other existing languages with Waterbear blocks to create draggable, snappable syntaxes for them. Waterbear is a toolkit for making programming more accessible and fun. Having a visual language means you don't have to focus on learning a syntax to start programming. Waterbear is good for kids, artists, and anyone who would like to make their computer do something new without having to become a "programmer" (although it could lead to that). Waterbear's blocks are heavily inspired by MIT's Scratch language, but the goal is not to slavishly duplicate Scratch, or to create a programming language, but to create a visual syntax tool that can be used with a variety of languages and projects, and to make it as widely available as possible.

Welcome to Jeroo! Jeroo is an effective, award winning, classroom-tested tool that helps novices learn fundamental concepts of object-oriented programming, including Instantiating and using objects Writing methods to extend behavior Selecting and using fundamental control structures Jeroo engages students with Story telling Animated execution Simultaneous code highlighting Current Version – 2.4 (Released August 2012) The new version now allows for the window to be dynamically resized, enabling you to have a much larger code editing window—helpful for those long programs and for presentation using large font sizes. walnut - dsource.org Walnut was originally an extension for Walter Bright's DMDScript . It went inactive for a year, got a new maintainer, and became a complete branch of that engine. Then the new maintainer started work on a completely new from-scratch edition of the engine, released under the BSD. A javascript engine. Smaller, faster, stronger. Walnut 1.x (the branch from DMDScript) is currently a stable and functional implementation of ECMAScript, pretty printed and commented.

10 Tools To Get Kids Excited About Programming Precocious. That was the single adjective used to describe a child displaying some natural talent straying from the normal. A generational leap later, I am not so sure that the word holds the meaning it used to. Every second toddler these days seems to display a natural likeness for things digital. So, it is easy to assume that they will take to computers as a fish takes to water. For the average kid (I won’t talk about someone like Lim Ding Wen here, though I will use his cute photo as the thumbnail alongside), computers and smartphones are fun tools. Code & Conquer Most Important: Have Fun. And earn some badges. See how your strategy works out in different scenarios, challenge other players, receive points, earn badges and climb your way to the top of the leaderboard. Boost your coding skills. Do it playing.

Code Monster from Crunchzilla <h2>Code Monster gets kids excited about programming. It is a combination of a game and tutorial where kids experiment with learning to code. <p> Code Monster use Javascript. Please enable Javascript if you want the play with the Code Monster. Otherwise, Code Monster will not be able to play with you. </p><p></h2> Waterbear is Like Scratch, but for JavaScript Unlike Scratch, you can view the code generated by Waterbear. Elza's vision for the project is much like that of Alan Kay's vision for Squeak and the ideas in the book Mindstorms by Seymour Papert. Elza hopes it can be used in programming books and courses to allow learners to explore code in a more immersive environment, or enable individuals to become "casual programmers."

The Graph Of Ideas Update: Graph has now been made interactive. I was originally put onto network visualisation by Simon Raper by his fantastic post graphing the history of philosophy. I’ve learned a lot in the last week and decided to be ambitious. Made with Code MWC BlocklyLevelsYou solved this level with 1 line of JavaScript:You solved this level with %1 lines of JavaScript:Are you ready for level %1?You completed the entire project. Check out more projects and resounces? Make iOS, Android and Flash Games with Stencyl Build Worlds If you're used to graphics editors like Photoshop, you'll feel right at home in the Scene Designer. Familiar features, such as a selection tool, zooming, grid-snapping and flood fill, will help you quickly craft complex worlds out of Actors, Tiles and Terrain. Create Actors Drop in graphics from your computer to create Actors on the fly. Then use Stencyl's Actor Editor to tweak your Actors' appearances, behaviors and physical properties, and to get them ready for showtime. Browse Game Assets When it comes to game development, most of us aren't Jacks of all trades. But thanks to StencylForge, our integrated marketplace, we don't have to be.

Cryptoy Delve into the world of cryptography with Cryptoy! This fun and educational app teaches you about the mysterious world of cryptography. It helps you to understand ciphers and keys, and enables you to create encrypted messages that you can share with your friends. You'll learn about four encryption techniques: Whirl - Dizzy Programming Other Languages:COW | Whirl | 3code | Taxi Important news! [06/22/05] Kang Seonghoon sent in his shocking 15,556 instruction "99 Bottles of Beer" implementation!

Creative Computing This guide was developed by members of the ScratchEd research team at the Harvard Graduate School of Education: Christan Balch, Michelle Chung, and Karen Brennan. We encourage you to use as much or as little of the guide as you like, to design new activities, and to remix the included activities. No matter your prior experience or expertise, we think of every educator as a co-designer of the Creative Computing experience. We would love to learn about what you’re doing, so we encourage you to document and share your experiences with us and with other educators via the ScratchEd community at GWM Manual: WOOL Reference Manual GWM Manual Contents ; --- WOOL comment ; any text up to the end of line Comments in WOOL begin with a semicolon and end at the end of the line.

Floors — Pixel Press Bring your video game ideas to life, simply by drawing! Pixel Press Floors is changing the way we experience mobile games by letting anyone be the creator, publisher and player of their own video game. With our creator platform, you can literally draw your own video game – no coding required. By recognizing the shapes (“glyphs”) you draw on paper or in the app using our “Draw-in-App” tools, we instantly turn your level blueprint into a game that can be tested, designed, played – and most importantly, published to the “Arcade” where others can enjoy your level and you can track how many times it’s played.