GitHub - peq/WurstScript: A programming language which compiles to Jass (the language to create Warcraft III Maps). Welcome – Wren. GitHub - cdglabs/wallingford: An experimental DSL for handling state and updates, along with constraints, in Rosette. Aseemr / Wysteria. Wysteria is being designed and developed in Programming Languages group at University of Maryland, College Park (PLUM). 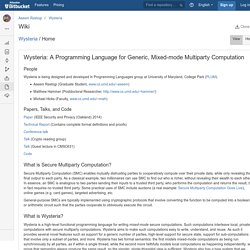 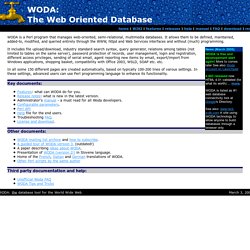 It allows them to be defined, maintained, added-to, modified, and queried entirely through the WWW, httpd and Web Services interfaces and without (much) programming. It includes file upload/download, industry standard search syntax, query generator, relations among tables (not limited to tables on the same server), password protection of records, user management, login and registration, different access privileges, sending of serial email, agent reporting new items by email, export/import from Windows applications, shopping basket, compatibility with Office 2003, WSLD, SOAP etc. etc. In all some 150 different pages are created automatically, based on typically 100-200 lines of varous settings. 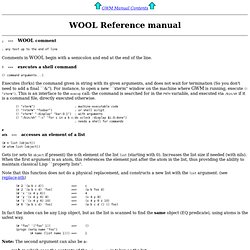 --- executes a shell command (! Executes (forks) the command given in string with its given arguments, and does not wait for termination (So you don't need to add a final ``&'') . (! #nth --- accesses an element of a list (# n list [object]) (# atom list [object]) Gets (or sets to object if present) the n-th element of the list list (starting with 0). Note that this function does not do a physical replacement, and constructs a new list with the list argument.

[07/06/05] Victor Ortiz submitted a nice whirl documentation tool written in Java! [09/22/05] Kang Seonghoon wrote a version of the interpreter in Ruby! Check this stuff out in the Downloads & Links section below. Whirl was designed with the following state-of-the-art features in mind: InheritenceSimplicityEase of useXMLMaintainabilityPolymorphismFlexibilityPowerSubtractionGrilled Chicken Unfortunately, none of those things made it into the final product. The Whirl programming language has only two instructions: 0 and 1.

In the world of Whirl, there are two instructions and two rings of 12 things to do on each. The Whirl environment generously gives the programmer the following tools: Examples Do 1+1 and print the results: Meta. Waterbear is Like Scratch, but for JavaScript. Unlike Scratch, you can view the code generated by Waterbear. 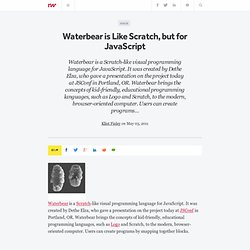 Elza's vision for the project is much like that of Alan Kay's vision for Squeak and the ideas in the book Mindstorms by Seymour Papert. Elza hopes it can be used in programming books and courses to allow learners to explore code in a more immersive environment, or enable individuals to become "casual programmers. " He uses his own kids as examples. His 10 year old son learned Scratch and has moved on to more advanced programming. He already thinks of himself as a programmer. Elza named the project after the extromophile of the same name because he wants it to be an extremely robust language.

Future plans include making it possible to generate Waterbear block arrangements from JavaScript code, enabling users to visualize existing JavaScript code. Whiley: an Open Source Programming Language with Extended Static Checking. Wiring. Walnut - dsource.org. Walnut was originally an extension for Walter Bright's DMDScript . It went inactive for a year, got a new maintainer, and became a complete branch of that engine. Then the new maintainer started work on a completely new from-scratch edition of the engine, released under the BSD. A javascript engine. Smaller, faster, stronger. Walnut 1.x (the branch from DMDScript) is currently a stable and functional implementation of ECMAScript, pretty printed and commented. Walnut 2.x (the from-scratch BSD licensed) is currently past design stage and in development stage and not yet in alpha stage.