How to Pick Your Battles on a Software Team. Creating software is an emotional process for the team members who all want to see it succeed, and this can create tension. 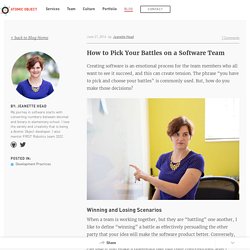 The phrase “you have to pick and choose your battles” is commonly used. But, how do you make those decisions? Winning and Losing Scenarios When a team is working together, but they are “battling” one another, I like to define “winning” a battle as effectively persuading the other party that your idea will make the software product better. Conversely, there are several different conditions that constitute “losing.” A winning scenario: In a planning meeting, a developer points out that there’s a pre-built charting tool that can do most of the chart’s required features quickly, and the product team says they’re willing to compromise on how the chart labels appear.

A losing scenario: When picking a battle, ask yourself a few questions. Can you win? Is it worth it? How severe is the issue to your product? Ask yourself: Choosing Losing Battles Hard-lost Battles. The Codist: My Biggest Regret As A Programmer. A little over 20 years ago I was at a crossroads. 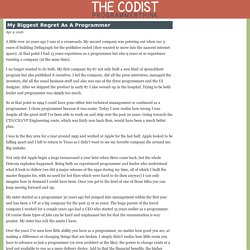 My second company was petering out when our 5 years of building Deltagraph for the publisher ended (they wanted to move into the nascent internet space). At that point I had 13 years experience as a programmer but also 9 years or so experience running a company (at the same time). I no longer wanted to do both. My first company 85-87 not only built a new kind of spreadsheet program but also published it ourselves. I led the company, did all the press interviews, managed the investors, did all the usual business stuff and also was one of the three programmers and the UI designer. So at that point in 1994 I could have gone either into technical management or continued as a programmer. I was in the Bay area for a year around 1995 and worked at Apple for the last half. 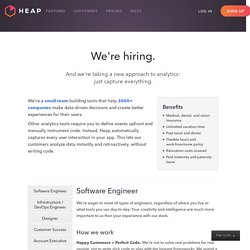 It's a major competitive advantage and helps us win deals from more entrenched analytics players. In fact, it's one of the main reasons why customers love us so much, and why so few of them have churned: We'd like to maintain this level of quality as our customer base grows. Take a methodical approach to support. Job Requirements: Web development experience. Heap was in Y Combinator’s W13 batch. We work in SF and can cover relocation costs. Head of Demand Generation We’re looking for our first marketing hire. At Heap, we’ve made a fundamental innovation in analytics, and companies like Zendesk and Macy’s have chosen us over more established incumbents. We’ve built the beginnings of a talented engineering, customer success, and sales organization.

Software Engineer We're eager to meet all types of engineers, regardless of where you live or what tools you use day-to-day. How we work Happy Customers > Perfect Code.