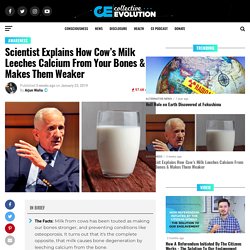 It has even garnered attention from Hollywood, placing the green vegetable under scrutiny from critics and skeptics alike.Reflect On:Any new health trend deserves some scrutiny and analysis, but shouldn't the only real question be: Does it work? In the case of celery juice, the proof falls in the thousands of people who are healing themselves with the protocol. By now you’ve likely heard of the celery juice phenomenon that is sweeping the globe. It’s being touted as the next ‘miracle elixir’ by many, with nearly 90,000 #celeryjuice hashtags on Instagram at the time of writing this article. The man behind the movement is Anthony William, better known as the “Medical Medium,” a Los Angeles-based health expert with a unique gift. As William explains in his books and his blog, celery juice holds so many incredible benefits for the body. Médico vencedor do prêmio Nobel adverte que carnes vermelhas e leite são cancerígenos. 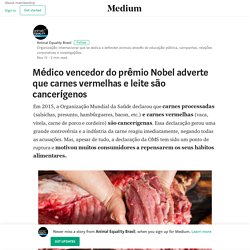 Dr Drauzio IRONIZA frase de Dr Lair ribeiro em Evento, quem sera q está com a razão? 2. The Real Reason The Dairy Industry Adds Vitamin D To Your Milk. Why Skim Milk Will Make You Fat and Give You Heart Disease. Joke: How do you dramatically increase sales of a new or unpopular food product to the American public? 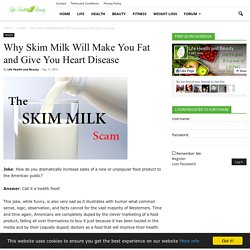 Answer: Call it a health food! This joke, while funny, is also very sad as it illustrates with humor what common sense, logic, observation, and facts cannot for the vast majority of Westerners. Time and time again, Americans are completely duped by the clever marketing of a food product, falling all over themselves to buy it just because it has been touted in the media and by their (equally duped) doctors as a food that will improve their health. Don’t believe it? How about margarine? What about soy? Agave nectar again is an example of a new food that was marketed using the “health food” label. Hopefully, you are now convinced that labeling an item as a “health food” is a frequently used approach for selling something to the American public. Prior to World War II, Americans didn’t ever drink skim or low fat milk. Dairy industry has a cow over plant-based milks. The dairy industry seems to feel udderly upended these days. 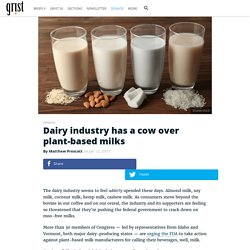 Almond milk, soy milk, coconut milk, hemp milk, cashew milk: As consumers move beyond the bovine in our coffee and on our cereal, the industry and its supporters are feeling so threatened that they’re pushing the federal government to crack down on moo-free milks. Nestle Baby Milk – The Scam. There is a lot of talk about corporations controlling the food supply, but Nestlé does not have much to do with food control. 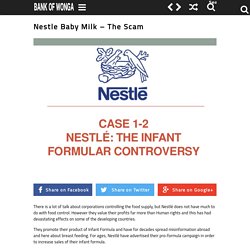 However they value their profits far more than Human rights and this has had devastating effects on some of the developing countries. They promote their product of Infant Formula and have for decades spread misinformation abroad and here about breast feeding. For ages, Nestlé have advertised their pro-formula campaign in order to increase sales of their infant formula. This campaign carried out in the developing and developed world, is considered ugly and greedy and something to be ashamed of.

There is of course the fact that not every woman is always able to breast feed, for many reasons. The appeal is a play on the insecurities of women who are at their most vulnerable, by encouraging them to keep up with the times, citing, Better Living Through Science! This type of hospital contracting is suggestive of the doctor’s recommendation. Experts Explain How Low-Fat or skim Milk Encourages Weight Gain. July 8, 2013 by MARCO TORRES. 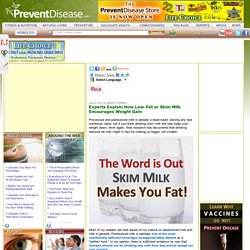 Fast food Recipe: The Skim Milk Scam. In 1980, the USDA’s first dietary guidelines suggested: “If you prefer whole milk to skim milk you can reduce your intake of fat from foods other than milk.” 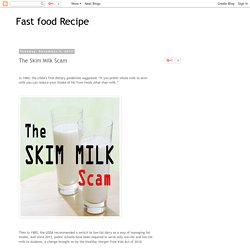 Then in 1985, the USDA recommended a switch to low-fat dairy as a way of managing fat intake. And since 2012, public schools have been required to serve only non-fat and low-fat milk to students, a change brought on by the Healthy, Hunger-Free Kids Act of 2010. In 2010, even Michelle Obama’s Let’s Move! Campaign promoted skim milk, and groups like the International Dairy Foods Association created campaigns advocating more milk-drinking among kids. But as The Atlantic’s Emma Green notes, powerful groups in the agriculture industry, including sugar and dairy farmers, have a deep vested interest in public campaigns to overhaul school lunches and change Americans’ eating habits in favor of drinking low-fat milk to eliminate dietary fat, which is why it has become an accepted part of public health. 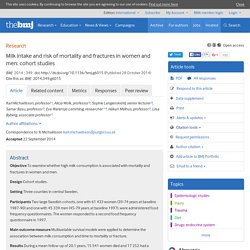 Main outcome measure Multivariable survival models were applied to determine the association between milk consumption and time to mortality or fracture. Results During a mean follow-up of 20.1 years, 15 541 women died and 17 252 had a fracture, of whom 4259 had a hip fracture.