Not Oil, But Dollars vs. Euros. March, 2003 Why is George Bush so hell bent on war with Iraq? 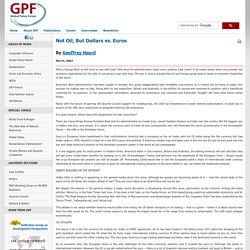 Why does his administration reject every positive Iraqi move? It all makes sense when you consider the economic implications for the USA of not going to war with Iraq. The war in Iraq is actually the US and Europe going head to head on economic leadership of the world. America's Bush administration has been caught in outright lies, gross exaggerations and incredible inaccuracies as it trotted out its litany of paper thin excuses for making war on Iraq. Faced with the failure of gaining UN Security Council support for invading Iraq, the USA has threatened to invade without authorisation. It is plain bizarre. There are many things driving President Bush and his administration to invade Iraq, unseat Saddam Hussein and take over the country. 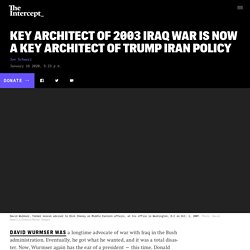 Eventually, he got what he wanted, and it was a total disaster. Now, Wurmser again has the ear of a president — this time, Donald Trump — and his sights are set firmly on Iran. An influential neoconservative in President George W. Bush’s White House who became a significant force behind the push for war with Iraq in 2003, Wurmser has recently been serving as an informal adviser to the Trump administration, according to new reporting from Bloomberg News. Declassified CIA Document Reveals Iraq War Had Zero Justification.

The justification for going to war in Iraq thirteen years ago, was based on a 93-page classified document that allegedly contained “specific information” on former Iraqi leader President Saddam Hussein and the weapons of mass destruction (WMD) programs he was apparently running. 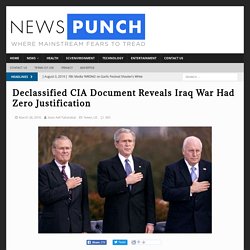 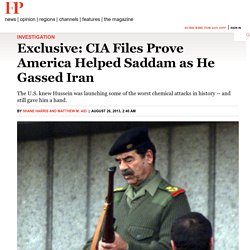 But a generation ago, America’s military and intelligence communities knew about and did nothing to stop a series of nerve gas attacks far more devastating than anything Syria has seen, Foreign Policy has learned. In 1988, during the waning days of Iraq’s war with Iran, the United States learned through satellite imagery that Iran was about to gain a major strategic advantage by exploiting a hole in Iraqi defenses. U.S. intelligence officials conveyed the location of the Iranian troops to Iraq, fully aware that Hussein’s military would attack with chemical weapons, including sarin, a lethal nerve agent. The intelligence included imagery and maps about Iranian troop movements, as well as the locations of Iranian logistics facilities and details about Iranian air defenses. "The Iraqis never told us that they intended to use nerve gas. The Iraq Death Toll 15 Years After the U.S. Invasion. 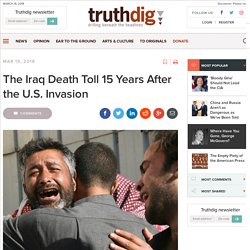 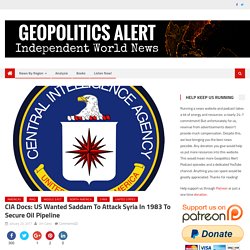 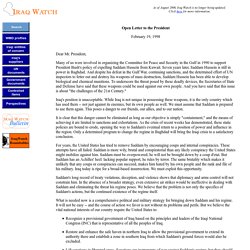 President, CIA RDP85T00287R000800840001 3. CIA Docs: US Wanted Saddam to Attack Syria in 1983 to Secure Oil Pipeline - Geopolitics Alert. Saddam Hussein’s CIA Interrogator Finally Reveals Truth About Bush’s Invasion of Iraq. By Carey Wedler | The Anti-Media (ANTIMEDIA) Last month, former CIA analyst John Nixon made headlines when he asserted that while he was interrogating Saddam Hussein after the 2003 invasion, the dictator warned him that the U.S. would fail in Iraq. 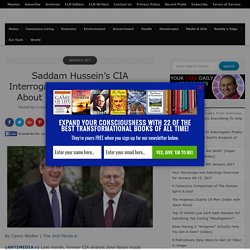 Now, Nixon has revealed yet another unsettling detail: the Bush administration knew they were going to take on Iraq on “day one” — before the 9/11 terror attacks even occurred. In fact, they viewed Iraq as “unfinished business,” according to the former analyst. “We never really understood at that point what unfinished business meant, but we knew that they wanted to do something,” Nixon said in an interview with BBC Radio 4′s “Today Programme” this week. “You know, they had their minds made up from day one. CIA Analyst Who Interrogated Saddam Hussein Just Blew the Lid Off the US 'Official Story' Disintegration of Iraq Will Take Days Now.

As the international community was absorbed by the rapidly changing situation in Syria, where government forces are finally getting an upper hand, the situation in Iraq has slipped the attention of the better part of geopolitical analysts. 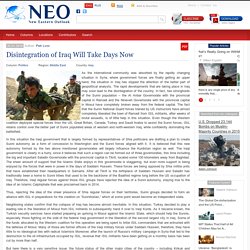 The rapid developments that are taking place in Iraq may soon lead to the disintegration of the country. In fact, two strongholds of the Sunni population – the Al Anbar Governorate with the provincial capital in Ramadi and the Nineveh Governorate with the provincial capital in Mosul have completely broken away from the federal capital. The fact that the Sunni National Guard forces trained by US instructors have almost completely liberated the town of Ramadi from ISIL militants, after weeks of brutal assaults, is of little help in this situation. Iraqi Prime Minister: US ground forces not welcome in Iraq. © Flickr/ The U.S. army Iraqi Prime Minister Haider al-Abadi has ruled out supporting the deployment of US ground forces in the country to fight against jihadist groups like Daesh, also known as ISIL, saying that while Iraq welcomes US training and support, it doesn't need combat troops in the country. 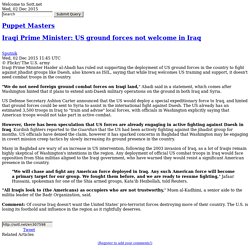 "We do not need foreign ground combat forces on Iraqi land," Abadi said in a statement, which comes after Washington hinted that it plans to extend anti-Daesh military operations on the ground in both Iraq and Syria. US Defense Secretary Ashton Carter announced that the US would deploy a special expeditionary force to Iraq, and hinted that ground forces could be sent to Syria to assist in the international fight against Daesh. The US already has an estimated 3,500 troops in Iraq to "train and advise" local forces, with officials in Washington explicitly saying that American troops would not take part in active combat. "We will chase and fight any American force deployed in Iraq. Emails reveal Tony Blair's deal with George Bush over Iraq war was forged before invasion started

Leaked White House memo shows former Prime Minister's support for war at summit with U.S. President in 2002Bombshell document shows Blair preparing to act as spin doctor for Bush, who was told 'the UK will follow our lead'Publicly, Blair still claimed to be looking for diplomatic solution - in direct contrast to email revelationsNew light was shed on Bush-Blair relations by material disclosed by Hillary Clinton at the order of the U.S. courts By Glen Owen and William Lowther In Washington For The Mail On Sunday Published: 21:00 GMT, 17 October 2015 | Updated: 06:15 GMT, 18 October 2015. The Source of the Iraqi WMD Claims Comes Clean … And Shows that the American and British Governments Willfully Manipulated the Evidence. The U.S. Government Funded the Iranian Terrorist Group Which “Found” The Documents Upon Which the Warmongers Are Relying. Newly-Released Memo by Donald Rumsfeld Proves Iraq War Started On False Pretenses.

Everyone Knew Iraq Had No WMDS … and Was Not Behind Anthrax Attacks or 9/11 Everyone knew that Iraq didn’t have weapons of mass destruction. Indeed, Secretary of State Colin Powell’s chief of staff – Colonel Lawrence Wilkerson – just said that Powell knew that there were no WMDs: I wonder what will happen when we put 500,000 troops into Iraq and comb the country from one end to the other and find nothing (starting at 6:43 into video). An Unheeded Warning on Iraq. This piece was reprinted by OpEdNews with permission or license. It may not be reproduced in any form without permission or license from the source. Ten years ago...

Vice President Dick Cheney, who pushed aggressively for the invasion of Iraq. DATE: March 12, 2003 MEMORANDUM FOR: Confused Americans FROM: Veteran Intelligence Professionals for Sanity SUBJECT: Cooking Intelligence for War Two members of Veteran Intelligence Professionals for Sanity (VIPS) appeared on German TV's equivalent of "60 Minutes" on March 6, 2003, to discuss the use/abuse of intelligence to support the U.S. administration's case for attacking Iraq. Ray McGovern and David MacMichael were among the former CIA officers interviewed by Channel One's "Panorama," whose interviewers were asking questions seldom heard in American media. The Last Letter. To: George W. Bush and Dick Cheney From: Tomas Young I write this letter on the 10th anniversary of the Iraq War on behalf of my fellow Iraq War veterans. I write this letter on behalf of the 4,488 soldiers and Marines who died in Iraq.

I write this letter on behalf of the hundreds of thousands of veterans who have been wounded and on behalf of those whose wounds, physical and psychological, have destroyed their lives. I am one of those gravely wounded. Confirmation that US Govt. uses Death Squads to create 'Civil War' in Iraq. James Steele, Cheney and Rumsfeld’s ‘Mr. death-squad’ in Iraq. Tyler Drumheller, Ex-C.I.A. Official Who Disputed Bush, Dies at 63. Paul Krugman Drops Epic Truth Bomb on Latest Round of Lies About Iraq War.

In Convicting Jeff Sterling, CIA Revealed More Than It Accused Him of Revealing. 10. World Health Organization Suppresses Report on Iraqi Cancers and Birth Defects – Top 25 Most Censored Stories of 2013-2014. In contradiction with its own mandate, the World Health Organization (WHO) continues to suppress evidence uncovered in Iraq that US military use of depleted uranium (DU) and other weapons have not only killed many civilians but are also the cause of an epidemic of birth defects and other public health issues. By refusing to release the report publicly, the WHO effectively protects the US military and its government from accountability for the resulting public health catastrophe.

A WHO and Iraq Ministry of Health report on cancers and birth defects was set to be released in November 2012, but officials have indefinitely delayed that report’s release. To this date, Denis Halliday wrote, the WHO report remains “classified.” Chemical weapons WERE found in Iraq but Pentagon kept it secret. An estimated 5,000 chemical weapons were found in Iraq between 2004 and 2011, it has been revealedPentagon chose not to release the information to the general public for several embarrassing reasonsThe weapons did not meet George W. Why the World Did Not Know about WMD in Iraq. Why Bush Censored Discovery of Chemical Weapons in Iraq Washington's Blog.

Reports out today: Democracy Now: A new report says the Bush administration concealed the discovery of chemical weapons in Iraq that had been developed with U.S. support in the 1980s — and then denied medical care to the wounded American soldiers involved. According to The New York Times, U.S. troops secretly reported finding more than 5,000 chemical warheads, shells or bombs after the 2003 invasion. Report: United States kept secret its chemical weapons finds in Iraq. The U.S. government suppressed information about chemical weapons it found in Iraq, and several servicemembers were injured by their exposure to those weapons, The New York Times is reporting.

In an article published late Tuesday, the newspaper says it found 17 American servicemembers and seven Iraqi police officers who were exposed to mustard or nerve agents after 2003. Report: Pentagon ‘suppressed’ finds of chemical weapons in Iraq and related U.S. casualties. Iranian soldiers wear gas masks near Basra, Iraq, on Jan. 16, 1987.